All-22: The Buccaneers' defense was passive, lacked fundamentals

The Tampa Bay Buccaneers are supposed to be built around their defense, but they looked lackluster last week. Can they improve on their outing on Sunday?

Share All sharing options for: All-22: The Buccaneers' defense was passive, lacked fundamentals

The Buccaneers defense was bad against against the Panthers. What we saw on Sunday was miles from expectations. A Cam Newton-less Panthers seemed to dominate what we believed to be a top-10 defense. We are going to analyze a few plays from a touchdown drive by the Panthers to see why. 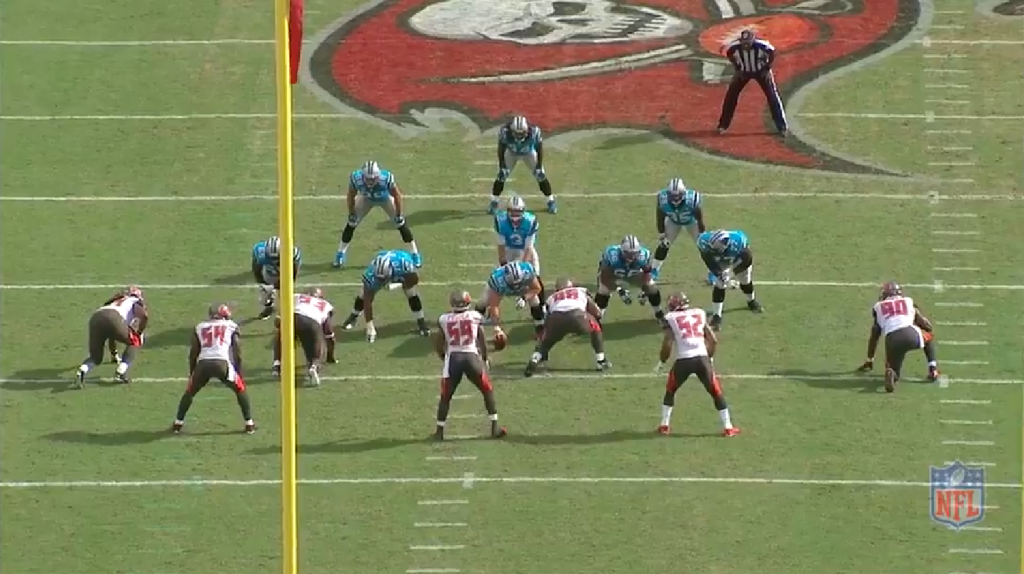 To start, we will view a running play by the Panthers. They are using a sort of diamond formation in the backfield that offers them some versatility. 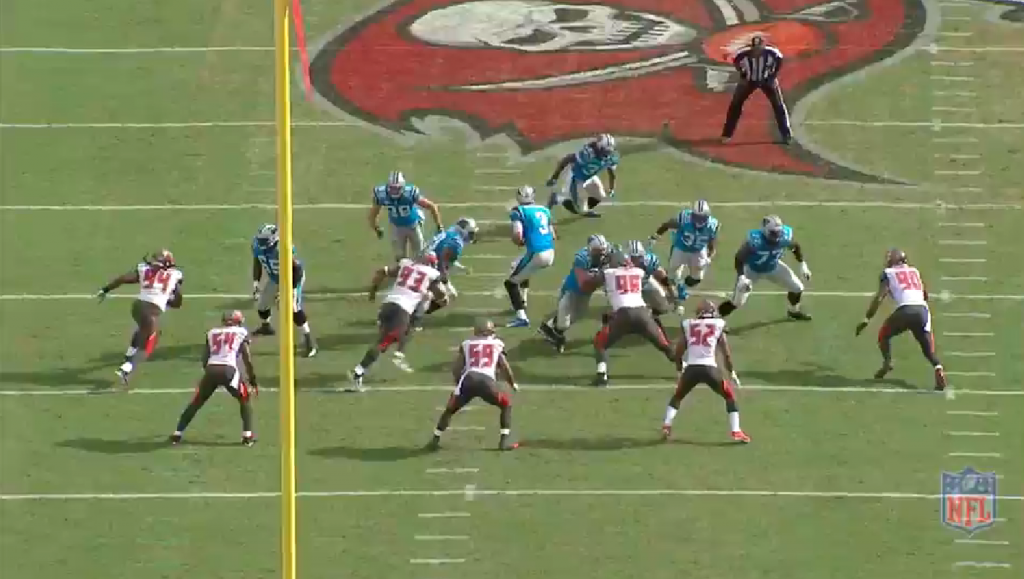 After the snap, the Panthers lineman have fired off of the line aggressively showing that they will run. Also, the right guard has begun to pull across the line of scrimmage. All of these signs should be telling the three standing linebackers to fill their run assignments (gaps) immediately.

In football terminology, these "signs" are called keys. In the initial moments of every play, each defender has to read their keys to know whether the offense is running or passing. The keys can vary for each position. Some defenders will watch an offensive guard while others will key the offensive tackle and so on. While less important to us, each defender can have multiple keys to read.

What the defender looks for is how the offensive lineman moves at the snap. The biggest sign of run is if the lineman fires forward with his head low while he seeks out a defender to push back. Conversely, if the lineman gets higher in his stance and takes steps backwards it is most likely a pass.

As previously stated, the linebackers should be reading run and charging their gaps. 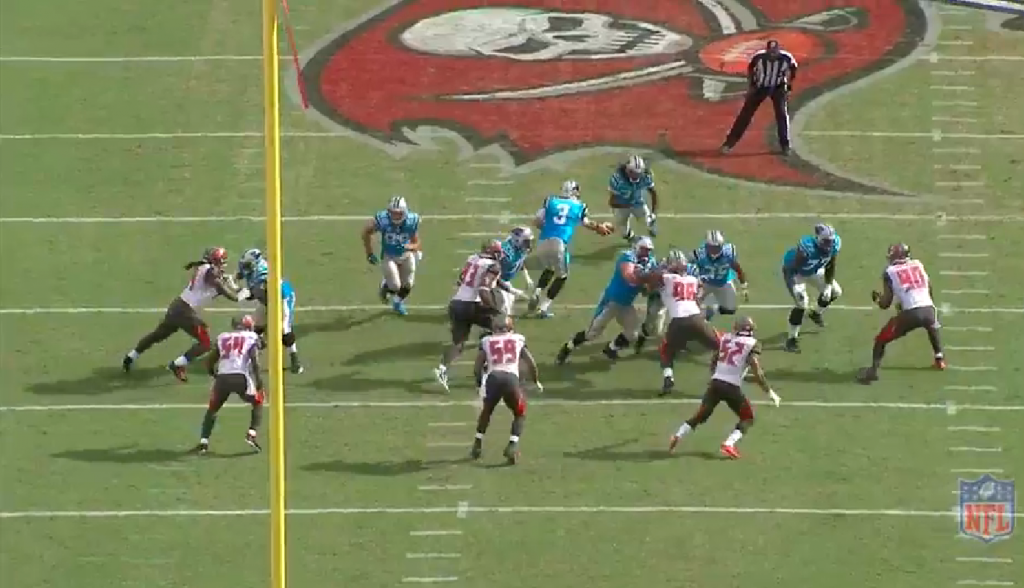 A few frames later the linebackers are still sidestepping. 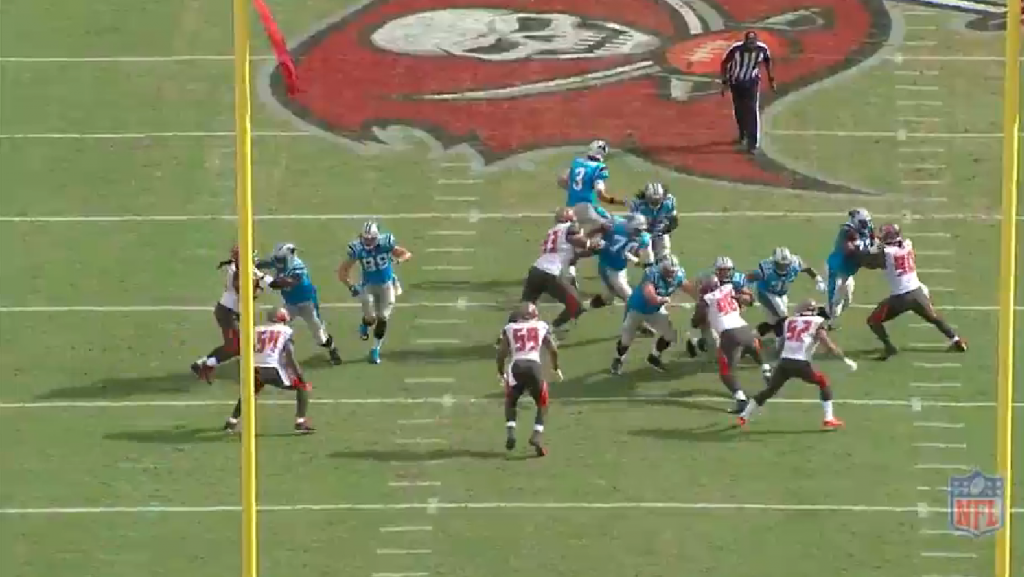 Even more frames later the linebackers are still sidestepping. 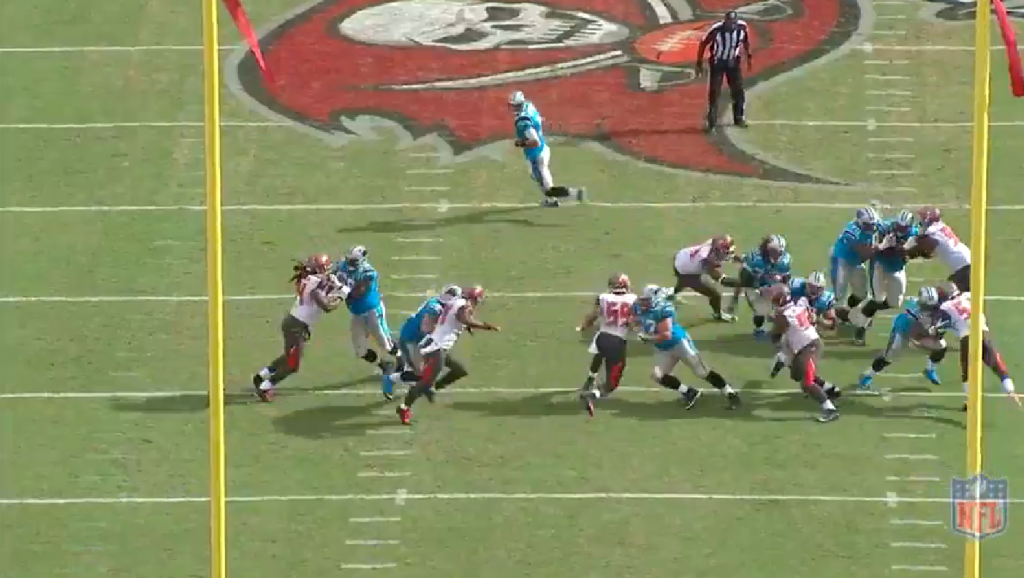 Finally, all three linebackers are getting blocked very close to their initial pre-snap position. Looking at the photos above, the linebackers begin about two yards beyond the five-yard marker. In this photo, the linebackers are getting blocked still on the same side of the five-yard marker. This is about as passive as a defense can get. The Bucs are handing away yards by watching the play come to them. This is certainly not the run defense I've gotten used to watching over the past few years. 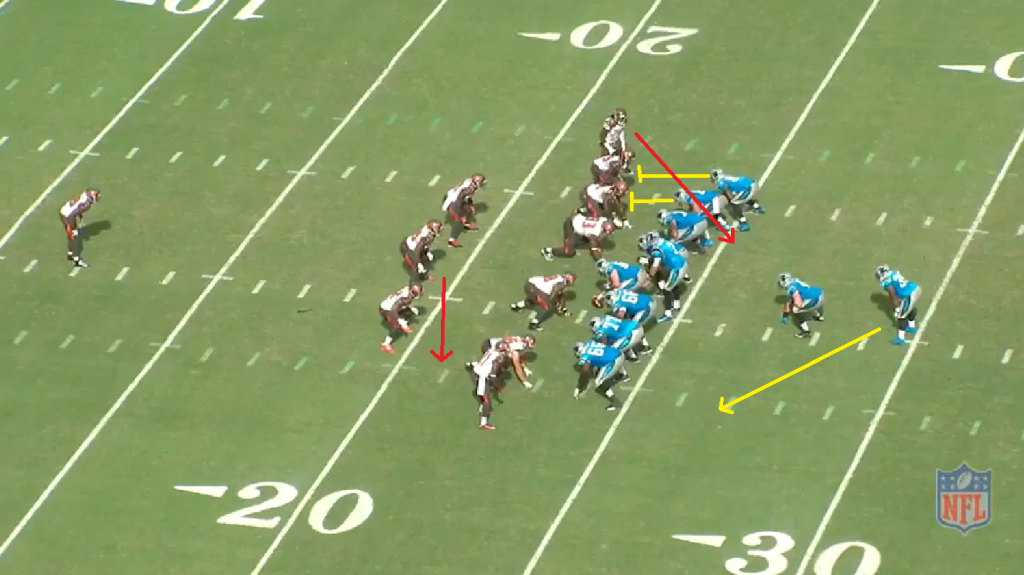 Two plays later, the Panthers are in a very heavy formation. The Bucs have responded by stacking the box. However, the Panthers have no intention of running the ball. They will run a hard play-action left and bootleg to the right.

Pay attention to the right side of the line. 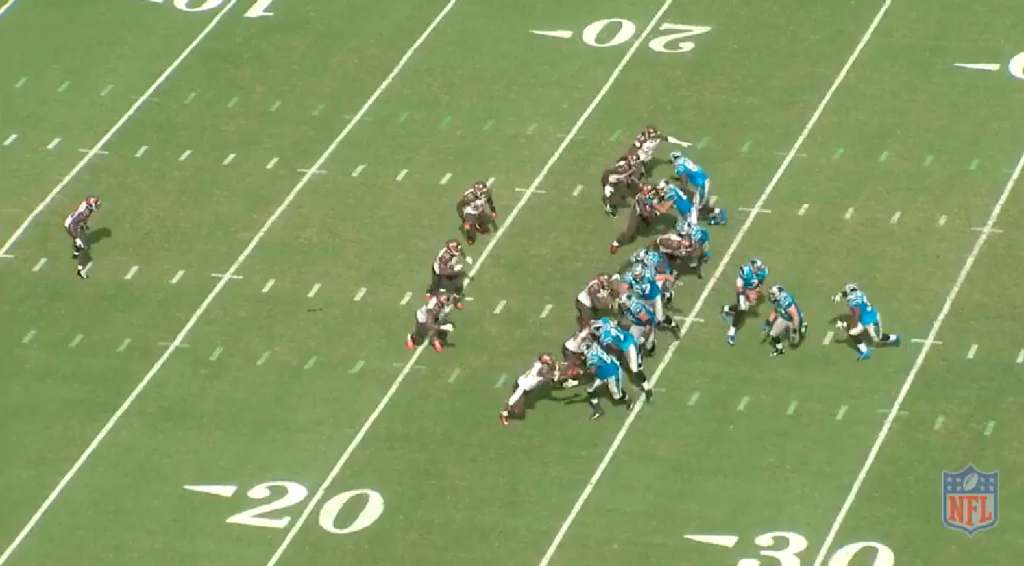 As they sell the play action, the linebackers creep towards the fake. Greg Olsen begins blocking Clayborn while Ed Dickson moves up to block Barron. Mike Jenkins is left unblocked. 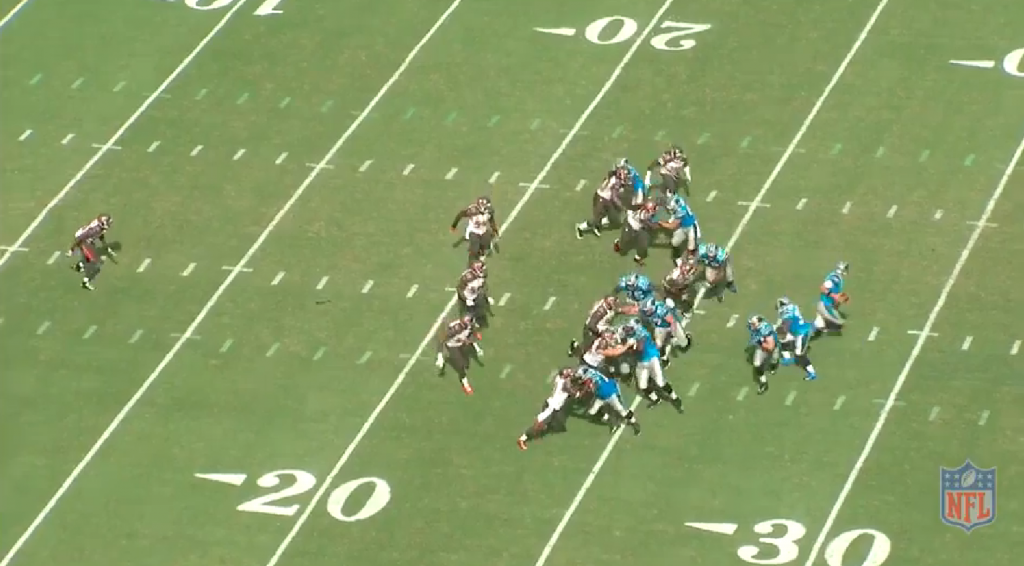 Moving forward, the play-fake has ended. Both of the Panther's tight ends are selling their blocks. Mike Jenkins is left staring at the quarterback. In the time that the Panthers have sold this fake, Jenkins has moved a whole one yard closer to the play. 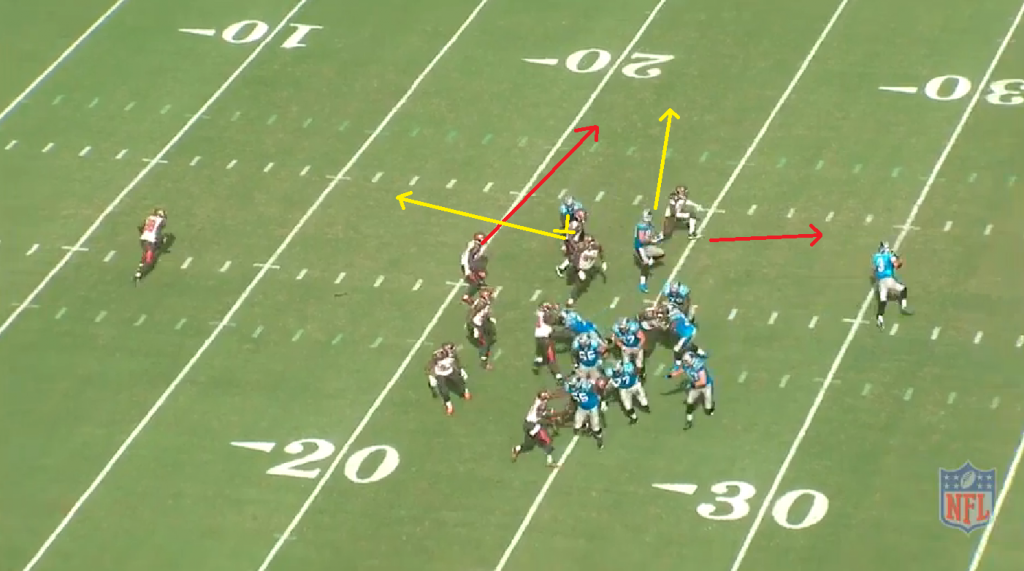 Olsen has now released his block and he pivots towards the open field. The defender that most likely had him man to man, Barron, is still being blocked by Dickson. This is not Barron's fault, but this means another defender has to pick up Olsen. David does a great job recognizing this but he is already a few yards behind. To hurt matters, Dickson is going to release his block on Barron and run straight up field to try and get a rub on David to slow him down.

At this point the Bucs are on the losing side of the play. The Panthers have executed flawlessly and the Bucs are left to pick the lesser of two evils: does Jenkins, who literally stood still for the first three seconds of the play, attack the ever so Newton-esque Anderson and stop him from running the ball or does he cover one of the best receiving tight ends in the league in Olsen? I think we all know what should be the answer to that question. 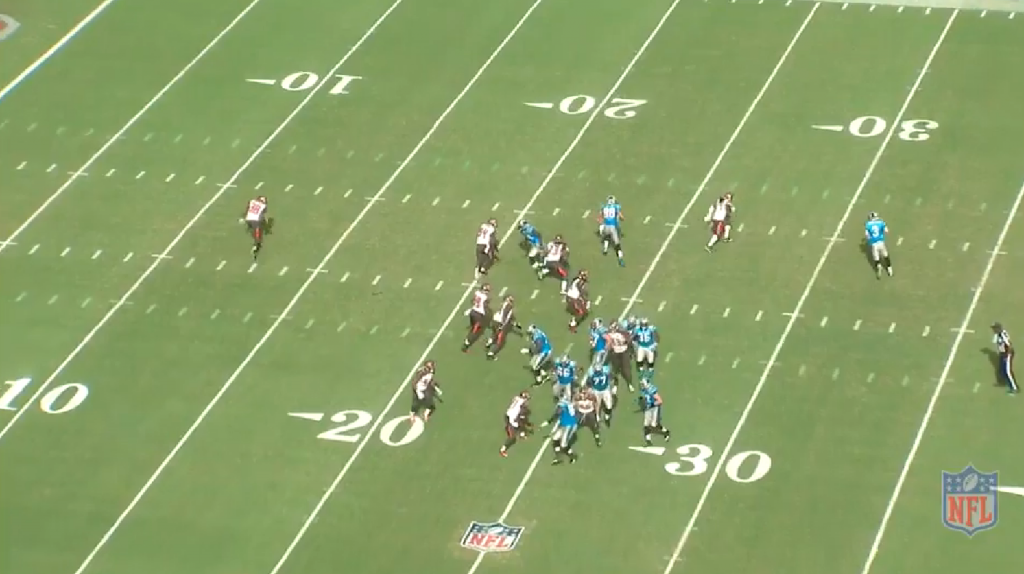 Jenkins attacks Anderson and leaves Olsen about as wide open as he can get for nine yards. After the play David gives Jenkins a look that is reminiscent of Ben Bailey- Really...?

While Jenkins assignment after the play-action is unknown, if the EMOL (end man on line of scrimmage) is responsible for Anderson then he needs to be attacking him much sooner. Standing still for a few seconds then attacking once you finally realize what is going on is hopeless (read your keys). At that point, screw it and blow your assignment and cover Olsen. 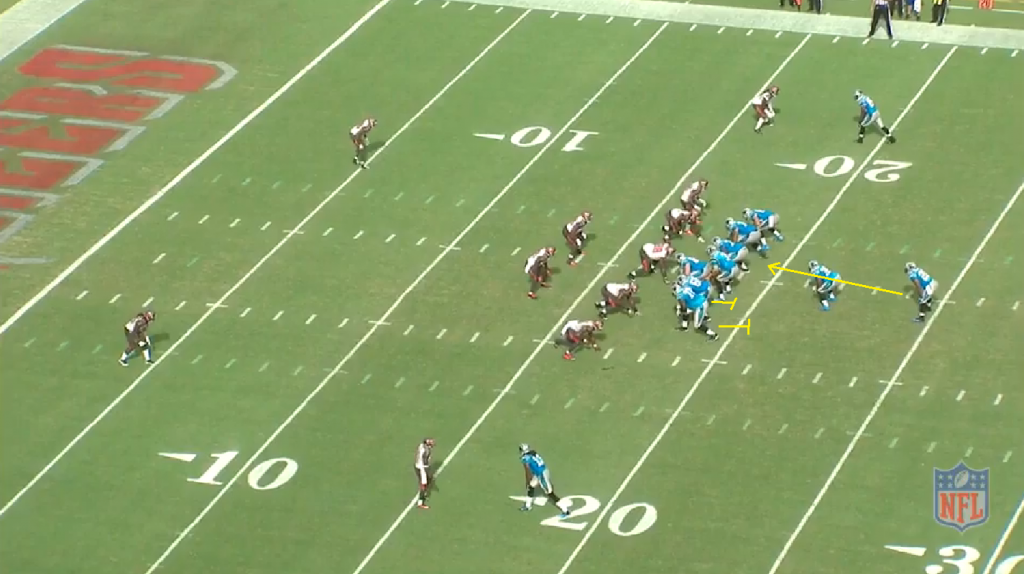 Two plays later, the Panthers are closer to the Buc's endzone. They are in an I-formation and will again show a play-fake. However, this time it is going to be the cheapest play-fake you will ever see. Watch how the Panthers left tackle, left guard, and center block on this play. 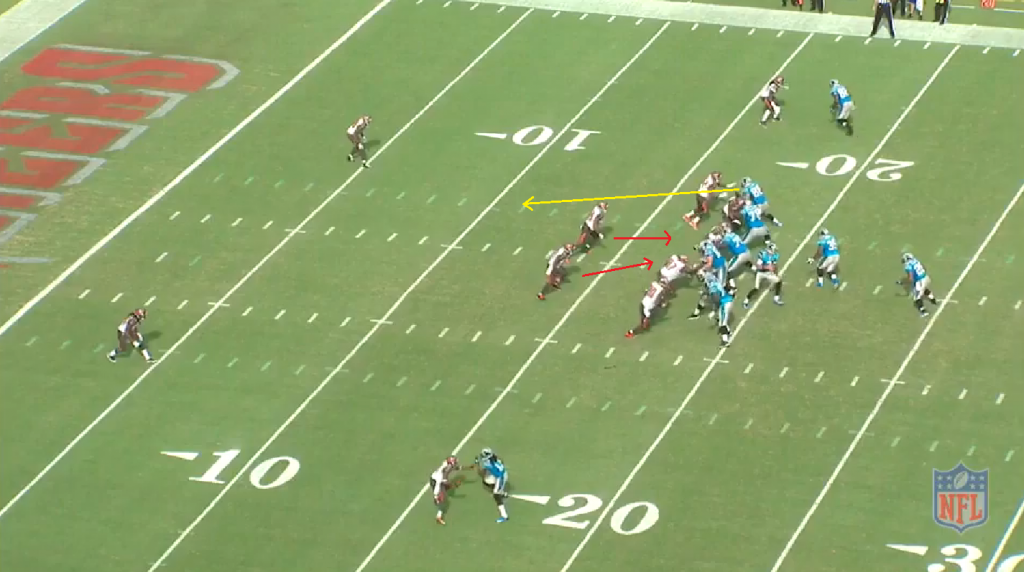 Enlarge the image if you need to. They all pass set. None of them fire forward with low leverage and aggressively look for blockers. Nothing about the offensive line says run. However, the linebackers seem sold on the fact that Anderson has his back turned. This is something that the linebackers should never be reading. 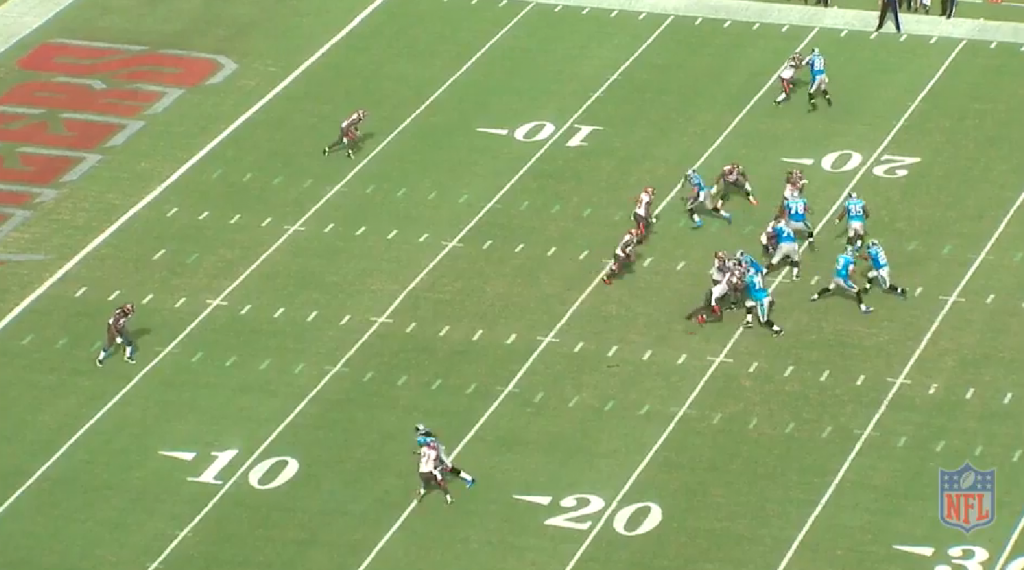 Now this has to be obvious. Olsen is sprinting past your linebackers and the offensive line has done nothing to open running lanes. However, at this point the defense has been blown and only a really poor throw could save the defense. 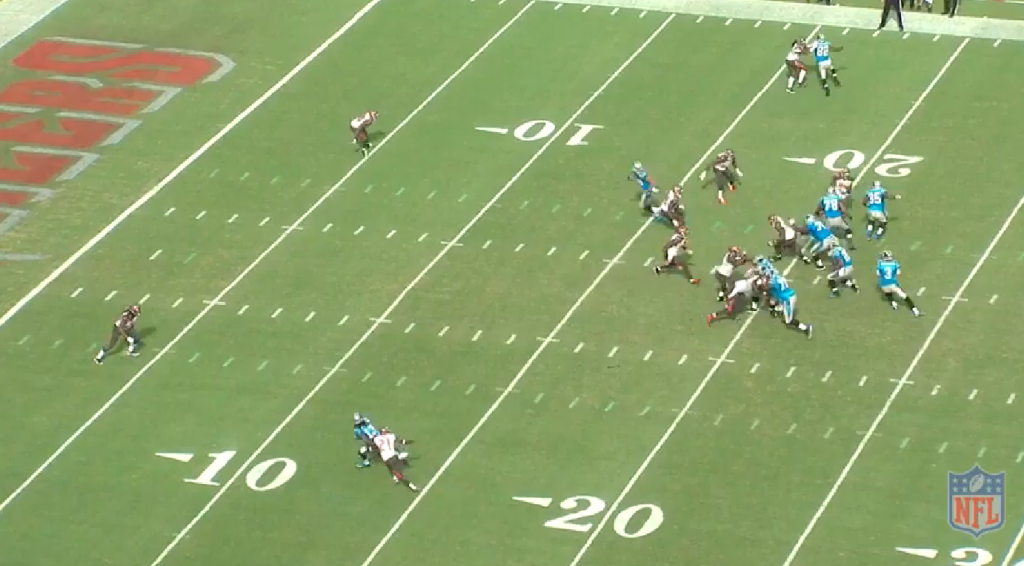 Surprisingly, the linebackers are still moving forward. Why not make this throw even easier? The cover-2 coverage should be pretty obvious. The safeties can't and shouldn't do much about this route. This is 100% on the linebackers. 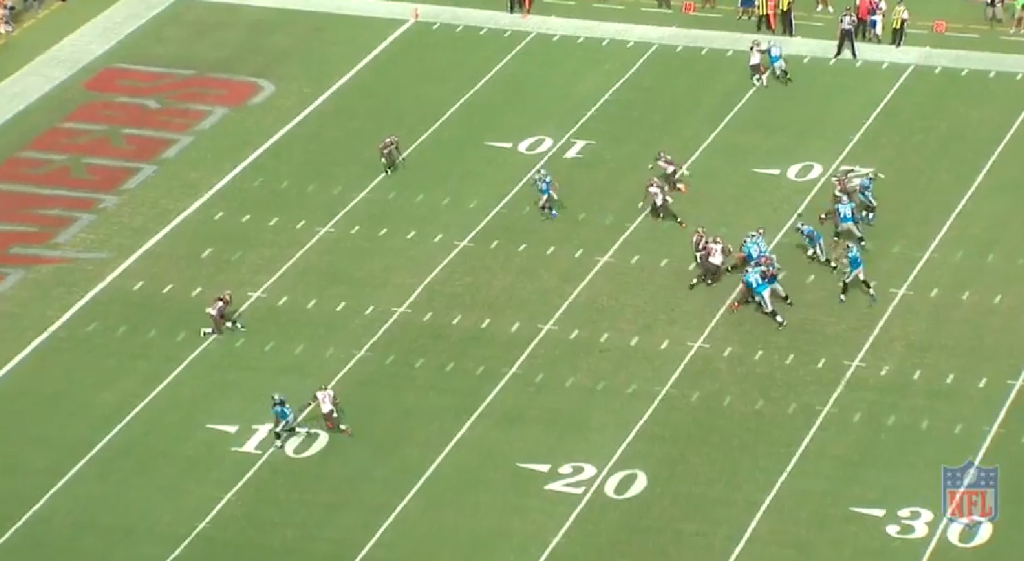 Ohhhhhh... They aren't running the ball. 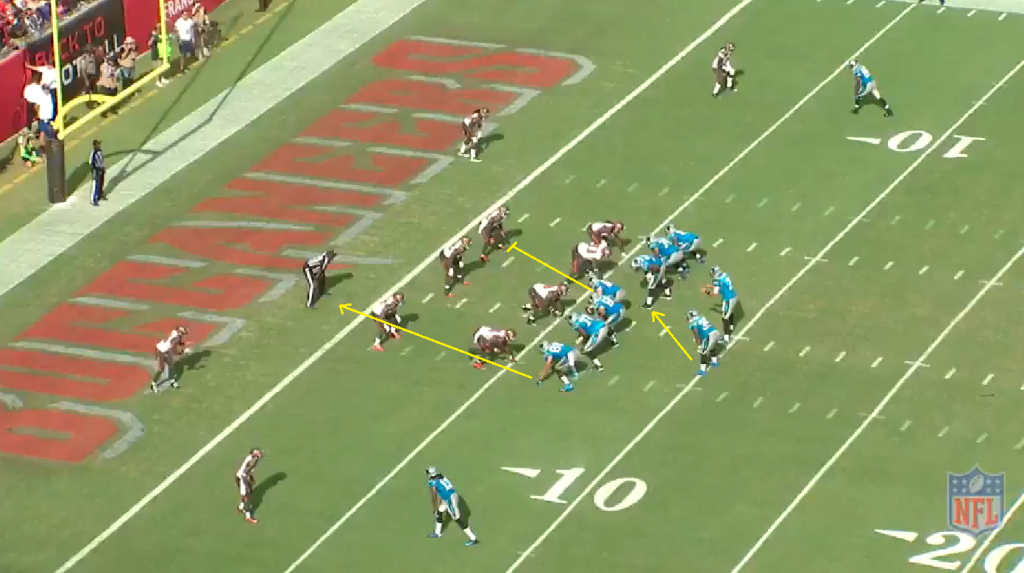 A few plays later, the Panthers are on the goal-line. Again, the Panthers are going to use play-action. However, this time it is an actual read. Anderson is going to read Casillas who is lined up over Olsen to see whether or not he should hand the ball off. 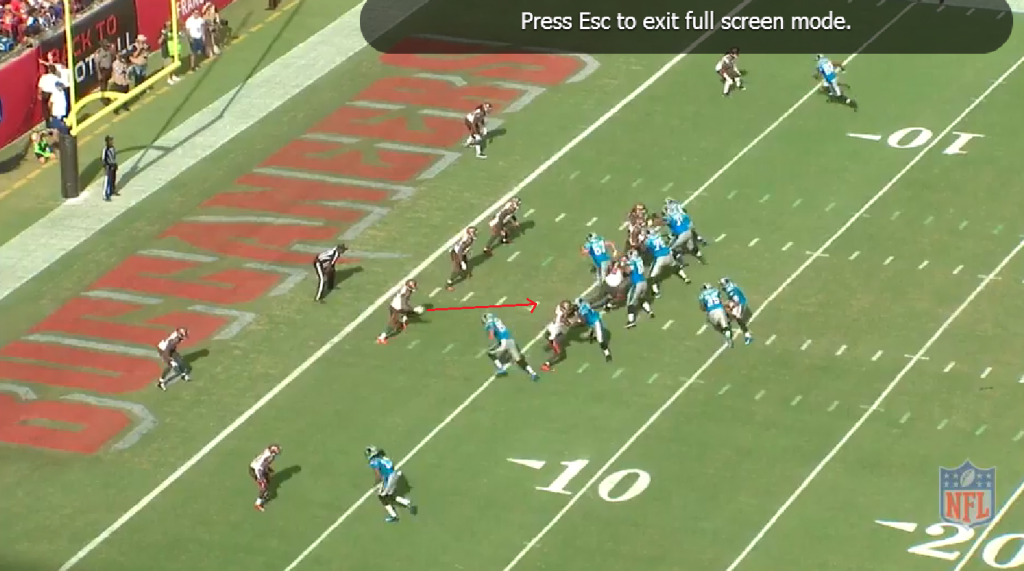 At the mesh point, Anderson sees Casillas moving towards the line. Olsen runs a great route as he bends wide of the linebacker. 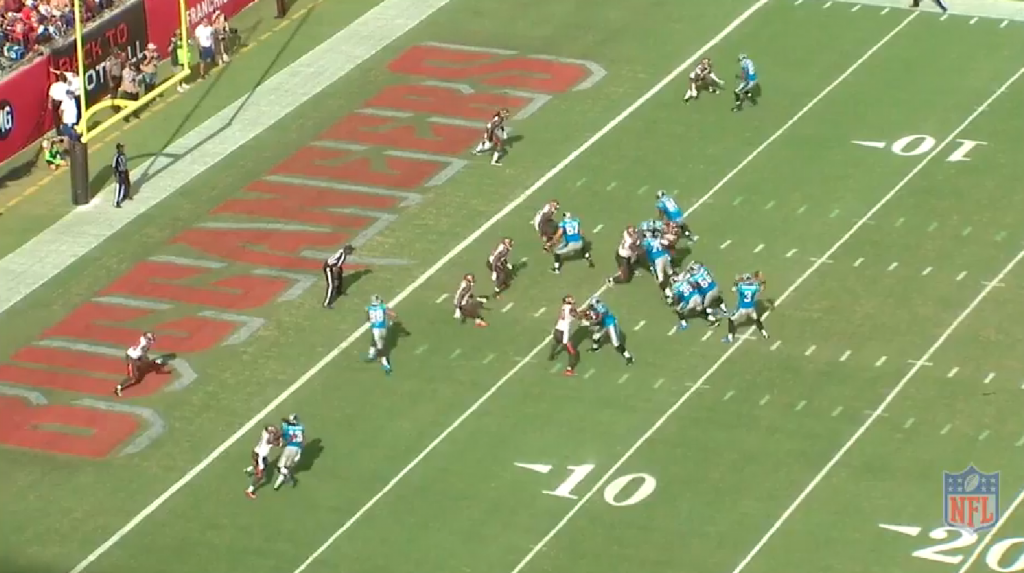 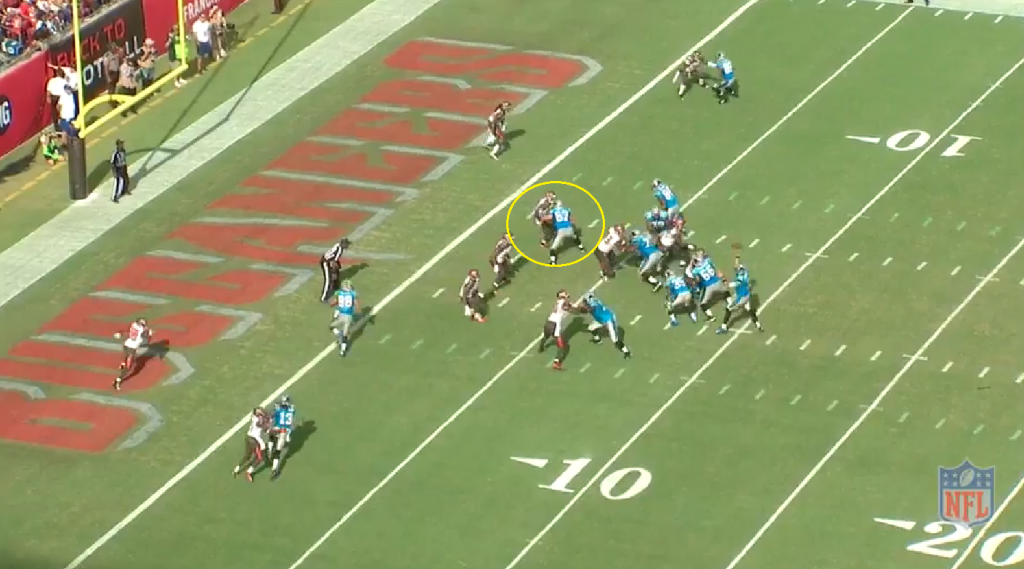 That bright circle is the Panther's center over four yards down field blocking David into the endzone while Anderson still has the ball in his fingers. When I saw this live I was pissed. In the previous play we saw the linebackers being foolish and biting on nothing. Now, however, there is an offensive lineman blocking a linebacker in coverage.

Illegally Downfield. An ineligible offensive player is illegally downfield if:

(a) he moves more than one yard beyond the line of scrimmage without contacting an opponent; or

(b) after losing contact with an opponent within one yard of the line of scrimmage, he advances more

than one yard beyond the line of scrimmage

There is an argument for that the NFL does give a little leeway with this rule. However, we are talking three to four yards. The ball starts on the six and he is blocking David on the two. 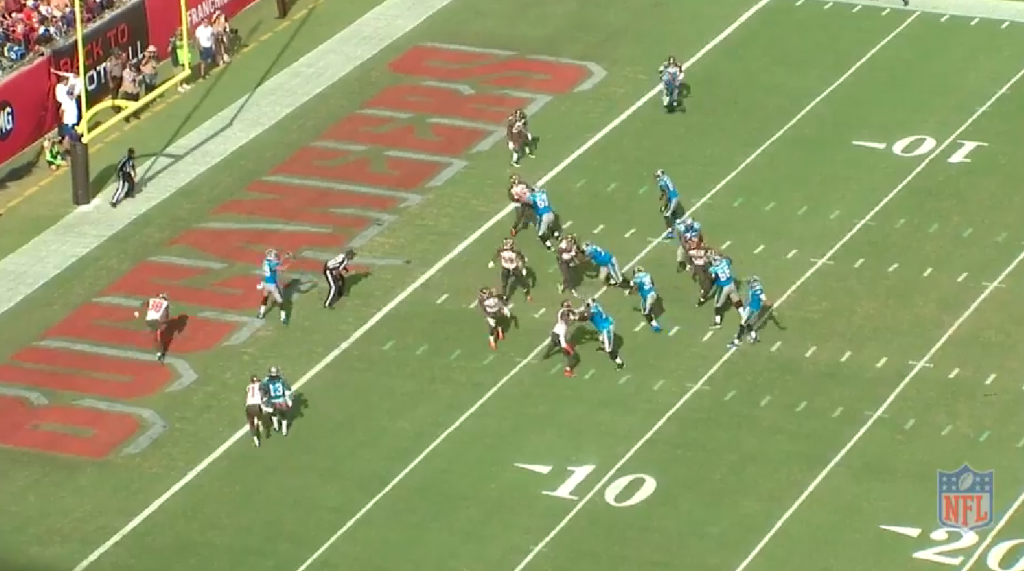 A few frames later, the ball is now in the air and David is getting blocked further backwards.

To quote another article of the Rulebook:

After the ball leaves the passer’s hand, ineligible pass receivers can

advance more than one yard beyond the line of scrimmage, or beyond the position reached by their initial

charge, provided that they do not block or contact a defensive player, who is more than one yard beyond

the line of scrimmage, until the ball is touched by a player of either team.

Whelp, this shouldn't be a touchdown. These rules are in place to protect the defense from being run in circles. Offensive linemen blocking linebackers in coverage is the biggest telltale sign of run. However, Anderson pops his head back up and throws a touchdown.

Ending my rant, the Buccaneers defense played miserably against the Panthers. The shouldn't-be-touchdown means little in the grand scheme of things. The defense failed to read its keys and react properly time and again. I really hope this week of practice is spent emphasizing basic fundamentals and not complex schemes.

I don't really mind if the Bucs get outsmarted. If they aren't missing tackles, blowing coverages, and playing passive defense then I wouldn't be disappointed after a loss. I really just want to see this defense go back to playing fast and flying around. Honestly, can the Bucs really lose a game by more than a possession if the defense doesn't make these mistakes?