All-22: Is Darrelle Revis playing man coverage or zone coverage?

Darrelle Revis may be the best cornerback in football, but the Tampa Bay Buccaneers aren't treating him like it. The good news is that they at least are increasing his responsibilities.

Share All sharing options for: All-22: Is Darrelle Revis playing man coverage or zone coverage?

We've got a brand Â new controversy on our hands, but at least it's about on-field stuff this time. No more MRSA -- it's all about Darrelle Revis. Are the Bucs using him in man or zone coverage?

"Well he is being used, often times, in man-to-man coverage," Greg Schiano said yesterday. "Whether the whole coverage is man-to-man or just him taking a guy out of the play man-to-man, most fans won't be able to figure that out by watching it. We do use his skills differently than some other guys because he has the ability to cover one-on-one. Does he do it every snap? No, there are times where you give him a breather and let him play zone, but there aren't very many."

But not everyone agrees. As I've noted over and over again, the Bucs simplyÂ are not using him to the best of his ability. I'm not the only one saying that -- so is Greg Cosell, noted film guru and NFL Films producer.

"Tampa played almost all zone and the Eagles ate them up," Cosell said onÂ the FantasyGuru podcast. "They've been playing zone all year long. In fact I charted it and I think Revis only played what you would call "Cover Zero Man" on two snaps in the entire game. The Bucs gave him some kind of help on 20 of 32 snaps because essentially, they're a zone team." 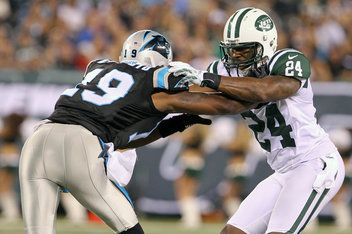 He thenÂ told Justin Pawlowski of 98.7 The Fan that the defense was "fairly predictable from a coverage stand point" because Revis only lines up on the left side of the defense. With the exception of the Cardinals game, Revis has not shadowed a receiver across the field, another hint that he really isn't playing true man coverage throughout a game.

Obviously there's some confusion here. Is Greg Schiano lying? Is Greg Cosell wrong? Well, ultimately, neither one is truly wrong. It just depends on how you define man coverage. Let's start with what Cosell is talking about: Cover Zero Man. That is: Darrelle Revis takes one player through the game, follows him everywhere and the defense gives him no help by safeties or anyone else anywhere. This is what that would look like. 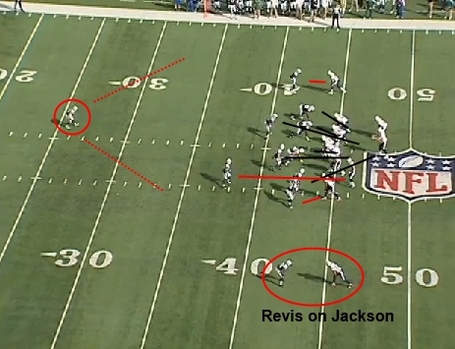 This is what the Bucs do not do, while it was what the Jets did to get the most out of Revis. If you don't do that, he's not going to be worth this contract and those two draft picks. Now, maybe at some point the Bucs will use him that way because they believe he's not 100% yet. Greg Schiano hinted at that, but we have seen no evidence that plays like that are even in their playbook. Color me skeptical.

Man coverage with a half-field safety

Instead, what the Bucs often do looks more like this. 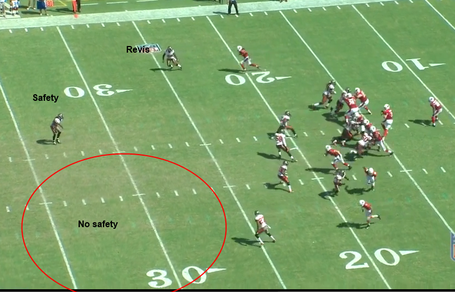 This is either zone coverage, or man coverage with a half-field safety over the top for Revis depending on the exact playcall. Note that Johnthan Banks on the other side does not have safety help if the bottom receiver runs a deep route. Now, Revis has played more man coverage on his receiver with these kinds of defensive lineups as the season has progressed, but this is not true man coverage -- he has safety help, and can play to it.

This is what we saw on the first touchdown for the Philadelphia Eagles. Darrelle Revis was playing DeSean Jackson one on one throughout the route, but he played him with outside leverage which clearly signals that he's expecting inside help.

Editor markup for Eagles vs. Buccaneers All-22: DeSean Jackson's first touchdown. . This is only visible in the story editor.

We know that Revis is playing a deep zone here not just because of his leverage, but because that's what Bill Sheridan said today.Â "On the first one, they ran away from the zone leverage and [cornerback Darrelle Revis] would probably tell you himself he wishs he would have played it better."

This doesn't necessarily mean Barron made a mistake -- I don't know the exact defensive playcall -- but it is very likely. Or this may just been have a route combination that beats this coverage. Every coverage has holes in it, because otherwise every team would be playing that one coverage with no holes.

Another version that could be called man coverage but isn't really man coverage with no help is a Cover 3 defense. This is what the Seattle Seahawks predominantly run. You need a free safety who has terrific range to run this effectively, but the principle is simple: the safety has the middle of the field, while the cornerbacks take vertical routes run by receivers to the outside. If receivers start running crossing routes, the cornerbacks either let them go or play to their inside help, depending on the exact play call.

Editor markup for Eagles vs. Buccaneers All-22: CoverÂ 3. This is only visible in the story editor.

Is this man coverage? To an extent, but it depends on the routes run by the receivers and again, there is help to play to. Once again, the Bucs are not in true man free coverage and they are not exploiting Revis' talents to create problems with an extra safety elsewhere.

Editor markup for Eagles vs. Buccaneers All-22: Riley Cooper touchdown. This is only visible in the story editor.

Clearly, Riley Cooper was too much for Banks to handle, which is an indictment on Banks. There was some hand-fighting at the end, but it was minor and the battle had been lost well before that, when Cooper managed to 'stack' Banks, winning down-field position.

It's these kinds of coverages that the Buccaneers predominantly run: Revis has some man or deep responsibility, but he has help somewhere, and they're not using his abilities to create advantages elsewhere.

Man coverage on a weaker matchup

When receivers go into the slot, Darrelle Revis does not follow them. Unless they're called Larry Fitzgerald, that is. Marques Colston and DeSean Jackson got the easy treatment: motion away from Revis and you're removed from him. I'm not sure why the Eagles didn't take more advantage of this, as they generally had Jackson to Revis' side. Still, the advantages are clear. In fact, Jackson's touchdown happened precisely because of that.

Editor markup for Eagles vs. Buccaneers All-22: DeSean Jackson's secondÂ touchdown. This is only visible in the story editor.

Revis is in man coverage, more or less, though he again appears to have some help in the form of a half-field safety. With DeSean Jackson aligned away from him, though, he runs a crossing route behind a tight end's comeback route to split the safeties. Mark Barron is in a no-win situation here, and I suspect that he made the choice that his coaches would tell him to make.

In his press conference, Sheridan said as much. "We had back end people back there but it's bending away from them," he said. That suggests that Goldson indeed had responsibility here, but there's no way he could have kept Jackson from scoring a touchdown here. The route concept, as simple as it is, defeated the coverage. Incidentally, this is something the Bucs themselves almost never do.

Maybe the problem is that Darrelle Revis isn't completely, 100% healthy yet. Maybe they're holding him back because of that. So, can he still play true man coverage? Can he make all the cuts? The film certainly suggests he can.

Editor markup for Eagles vs. Buccaneers All-22: Revis in manÂ coverage. This is only visible in the story editor.

That's one of those two snaps of true man coverage for Revis, and he doesn't give DeSean Jackson any room. This play takes a long time to develop before the pass rush can get to Foles, and Revis just blankets Jackson effortlessly. Why he was only asked to do that twice in the game is beyond me.

Man or zone? A little of both

Both Greg Cosell and Greg Schiano are right. Revis is almost never asked to play true man coverage without safety help, but he wasn't in real zone coverage as much as he was in previous games, either.

One good sign is that Revis was rarely in underneath zone coverage in this game. There didn't appear to be a lot of Cover 2 zone played, which was the predominant coverage used in previous games. You would often see Revis squat on underneath routes and pass off vertical routes to a deep safety in previous games. Instead, he had predominantly vertical responsibilities in this game, with the underneath routes the responsibility of other players.

Still, the fact remains that the Buccaneers are not using Revis at his most effective, and while it worked against other teams, it hurt them against the Philadelphia Eagles. Other teams had had the most success playing a lot of press man coverage against the Eagles to disrupt the timing of their routes, and the Bucs didn't do anything of the sort. In fact, they predominantly played off coverage, whether it was a form of zone or man coverage.

Will this change in the future? I'm not too hopeful, honestly, but at least we're seeing some progression in the way they're using Revis. We won't see the full-on Rex Ryan treatment, who schemed his entire defense around Revis' abilities, but we will hopefully see Revis at least given more responsibilities as the season progresses.

Eagles vs. Buccaneers: Tampa Bay gets a chance for revenge