All-22: Mike Glennon's ball placement, anticipation must improve if Buccaneers are to trust him

Can Mike Glennon be the Tampa Bay Buccaneers' franchise quarterback? Early returns say he has potential, but he's far from good enough to tie your franchise to.

Share All sharing options for: All-22: Mike Glennon's ball placement, anticipation must improve if Buccaneers are to trust him

Mike Glennon has shown good and bad things this year. On the positive side, he has mostly remained calm in the pocket, completed a higher percentage of his passes than Josh Freeman and hasn't made too many bad decisions. All of this could lead one to believe that he's on the right path and indeed, there's some reason for cautious optimism. But the quarterback has too many flaws to be a good quarterback right now.

The most obvious flaw is one we've all seen: the deep ball. Glennon has hit on just one deep ball so far, and even that one was an underthrown 40-yard pass to Vincent Jackson. Sideline deep passes continually land out of bounds rather than giving his receivers a chance to catch the ball. I don't need to go to the game film to show anyone that: it should be obvious to anyone who's watched Glennon play over the past games.

The anticipation and ball placement become a big issue on out routes. Glennon has decent arm strength but it's not elite and he can't afford to be late with the ball on a route to the sideline. These are the kinds of routes that get picked off a lot if the placement and anticipation aren't outstanding: the ball has to be thrown well before the receiver makes his break, and the ball has to be placed high and to the outside where the cornerback can't get to it if he does get a jump.

Glennon doesn't do this, and this has been issue in all three of the games so far. 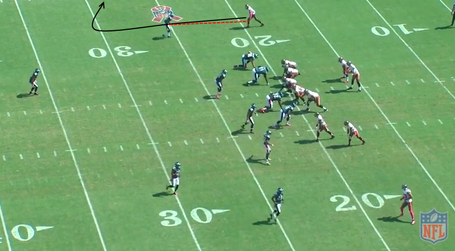 This play against the Eagles is the perfect example. The Bucs need nine yards on third down here, and they're going to target Tiquan Underwood on the short comeback/out route. Underwood is a fairly sloppy route runner so this may not be the best idea, but it's what they went with. Glennon messes it up, though.

The ball really has to be out here with Mike Glennon's arm strength, especially given the fact that the cornerback is squatting on the route. Glennon doesn't have the zip on his throws to get it there in time without anticipation, but he waits until Underwood goes into his break to throw the ball. 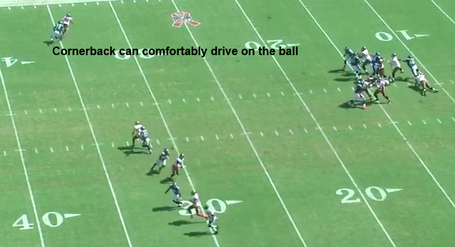 The ball has only just been thrown and Underwood is well into his break. The cornerback was never fooled by Underwood' sloppy route, which means he can comfortably drive on the football and undercut the route. Still, this wasn't a total loss at this point: excellent ball placement could have saved the play. 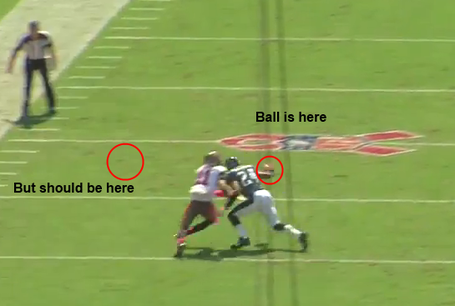 Well, I guess not. That's an easy pass breakup for the cornerback and had he been a bit quicker out of his break, it would have been an easy interception.

If this were an isolated incident we wouldn't be talking about it, but Glennon consistently does this on outside throws. Receivers have been forced to turn into defensive backs on several throws in each of Glennon's three starts. At some point, these passes are going to be picked off.

Throwing it too far inside caused another incompletion late in the Eagles game.

At times, Glennon displays the ability to throw with anticipation and timing as he does here. The issue on this play is purely one of ball placement: instead of leading Wright and giving him a comfortable catch ahead of his body he places the ball behind Wright. Not only does this make the catch much more difficult, it also gives the defender an opportunity to make a play on the ball. The defender was beat, but Glennon's ball placement wasn't good enough to get a touchdown.

This doesn't have to be an issue throughout Glennon's career, but it's a seemingly minor thing that has to change, and it has to change quickly.

Ball placement and yards after catch

Ball placement is also crucial to create yards after catch, and that's an area where Glennon is too inconsistent at this point. Too often he's either late with the throw or his placement is sub-optimal, taking away the possibility for a big play. It's a big reason why he's throwing for just 5.6 yards per attempt -- one of the lowest totals in the league. 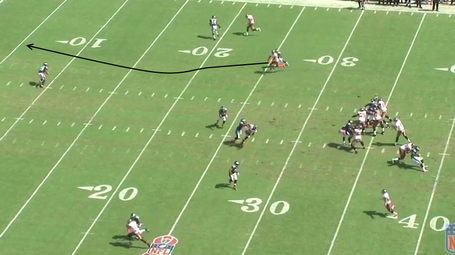 Good ball placement here would have given the Buccaneers a big play and a potential game-altering score against the Eagles. Instead, this is what happens.

That would have been a huge play. Instead, the result is that the Bucs come up a yard short of the first down and settle for a field goal (a remarkably bad decision, by the way).

We can see the difference with a well-placed ball on a similar slant here.

Glennon waits for Vincent Jackson to clear the linebackers, gets the ball to him on time and in stride and the result is a walk-in touchdown. Glennon can do it at times -- just not consistently. Similarly, he displayed it on a big Tim Wright catch.

It may seem like I'm being harsh on a rookie quarterback, and I am. None of these issues are insurmountable and he could improve on them if given time. The issue is that we're not evaluating whether he can be good down the line. We're evaluating whether the Buccaneers should pass up a high first-round quarterback to keep starting Mike Glennon, because that's the decision they'll have to make in April.