AUTHOR'S NOTE: This article was submitted in the publishing queue on Oct 4, 2017. I am not in charge of publishing. I simply write, submit my work into the queue, and hope it gets published.

"Is the Bucs defense bending too much?"

If you have not read the preview of the game, then here is the link: By the Box Preview, Gm 3 NYG 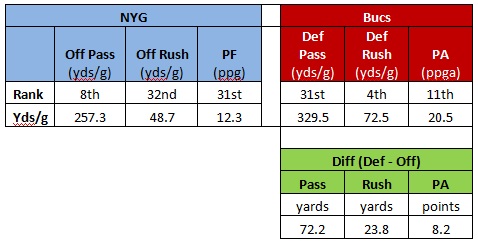 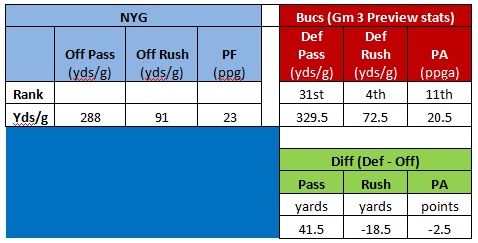 Just from the differentials, the Bucs gave up more rushing yards and points than their two game averages. But if you compare the offensive production of the New York Giants from this game to their average, then the defense truly has faltered. Rushing for 91 total yards is the highest rushing output for the Giants this whole season thus far. Thank goodness the rate of rushing production brings down the scare as New York’s rushing rate was at 3.3 yards per rush in this game. And when you look at the passing rate per attempt, then 5.9 yards per pass through the air feels more like dink and dunking their way throughout most of the game.

The defense was able to make the Giants one–dimensional despite the gaudy production given up. 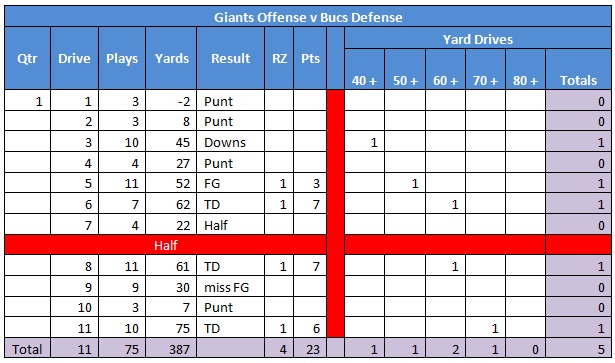 With DT Chris Baker returning, the Bucs defense was able to conjure up 5 TFLs (tackles for loss). Last week against the Vikings, there were only 2 TFL’s generated. Baker had one QB hit recorded in the game, there were only two recorded QB hits by the Bucs’ defense. Also with the return of CB Brent Grimes, the defense was able to induce 7 PDs (passes defended). Grimes had 3 TFL’s on his own. The previous week, there were only 2 PD’s recorded. Having both starters returning did help bolster up the porous outing against the Vikings in week three of the NFL season.

The defense was able negate six out of the 11 Giants offensive opportunities, including three 3-and-outs. Although one of those opportunities was New York’s seventh drive, which came just before the half, the Bucs still did not allow any opportunity to permit a hail-mary or long field goal attempt.

Upon closer inspection, aside from the three 3-and-outs, the Bucs defense was playing ‘bend, but don’t break’. The Giants offense was able to generate 20 yards or more on nine offensive possessions.

Third down efficiency was not so effective. Despite posting up a 47.1% efficiency rating, the Bucs defense allowed eight third down conversions, 8 out of 17 third down attempts.

Red Zone defense, or there lack of, is what gave the Giants opportunities to gain the lead as well as the potential to win the game. In four Red Zone defends, the Bucs only prevented one from turning into a touchdown.

No sacks and only two QB hits on Eli Manning from the Bucs defense. Part of that is due to the Giants’ offensive scheme, but a bigger part are the referees swallowing their whistles as the Giants offensive line were allowed to hold onto Buc defenders rushing. When Gerald McCoy has an offensive lineman’s arm wrapped around his neck as McCoy has beaten the lineman does not generate a holding flag, then there will be no holding being called at all. Proof of this is that the Giants were called for one penalty all game, an offensive penalty for stepping out of bounds and coming back into the field of play to catch the ball. (There was another penalty called, but it was off-setting.)

First half stats reveal the Giants’ offense was on the field for 18:58, or 19 minutes if we are rounding off. There are only 30 minutes in a half. The Bucs defense thwarted the Giants’ first four offensive possessions. Then it relented to give up back to back scores towards the end of the first half.

In the second half, the TOP was balanced between the two teams.

This is where complementary football matters. The Bucs offense had three 3-and-outs in the first half compared to only one in the second half. Tampa’s offense also scored two touchdowns in six plays for a total of 2:46 possession.

Along with employing a hurry-up offense, the Giants’ offense was working mostly from a 3-second rhythm in the passing game, outside of play-action. That combination was how the Giants offense was able to dink-and-dunk successfully as well as limit the Bucs from having any pass rush. I have to admit, QB Manning’s timing on those passing plays was amazing to witness and that extra second does help pull the safety help to one side while Manning finds another receiver elsewhere. This is the type of play that Winston needs to emulate because it does not show that Eli has pre-determined of where he is throwing.

Drive 6: 3rd and 7 on TB 39 yard line. Both LBs Beckwith and Glanton were part of the blitz. Glanton was able to into the backfield so easily, but engaged the RG instead as the play call was designed to have GMC stunt inside. This is a failed play call as the Bucs had leverage in numbers and negated its leverage by stunting and stunting their best lineman. Look closely and you will see that Glanton is being held by the RG, with the RG’s arm wrapped around Glanton’s body. That should have been called for an obvious hold since the arm is wrapped around outside of the pads. That third down pass helped conclude this Giants’ drive into a touchdown.

3rd and 4 on TB 14 yard line. This is where Eli Manning scrambled untouched into the end zone for an easy score. Both Beckwith and Glanton were mixed up as to who was going to cover the RB and QB. You can see the confusion in the replay. One of these LBs is supposed to account for the QB, but both drop deep into coverage. Beckwith did not follow any RB, but kept drifting further away from Manning. Rookie Beckwith was obviously late to Manning and one can see Beckwith uselessly trailing Manning as Manning slid through for the touchdown.

Drive 8: 1st and 10 on TB 32 yard line. The linebackers are supposed to fill in the gaps on the run. Glanton forced the RB from escaping to the left and back into Bucs leverage. Problem here is that Beckwith was waiting and watching instead of attacking the open gap. With waiting, it allowed the pulling lineman to take out Beckwith in the second level. RB Gallman saw the gap and ran untouched through the gap.

2nd and goal on TB 4. Touchdown pass to RB Gallman leaking out from the backfield. The pass was thrown to the left side of the field where you had Glanton on a WR, S Conte playing deeper while between Glanton and Beckwith, and Beckwith. On the snap, the WR runs a slant and Glanton follows the WR even though Conte was there to pick up the WR. For the life of me, why is Beckwith dropping into coverage with the ball on the 4-yard line? One of these LB’s is supposed to track the RB out of the backfield. Easy touchdown pass for Eli Manning.

Drive 11: 3rd and goal on TB 2 yard line. TD pass to TE. LB Lynch decided not to stay tight on the TE and drop into coverage, but also LB Beckwith was in the area throw into.

All three touchdowns can be attributed to the Bucs’ backup linebackers. Although Beckwith does get a lot of Pro Football Focus (PFF) acclaim, he and his fellow backups are lacking experience that starters David and Alexander bring. The Giants feasted on our backup linebackers.

DT Baker and CB Grimes return did help improve aspects of the Bucs defense as denoted in the article, but there exists much needed improvement in 3rd down efficiency and Red Zone efficiency. Some of the problems could be amended with the return of MLB Kwon Alexander and WLB Lavonte David. Yet the pass rush does need some kind of improvement, but a large part of me really blames the referees for not ever calling a holding call on the Giants’ offensive line in light of the obviousness of the what is the standard to call a penalty for holding. The defense is still waiting to unleash DE Jacquies Smith, who only played in seven snaps in his first game back of the season.

After week 4, the Bucs rank last overall in defensive 3rd down efficiency. 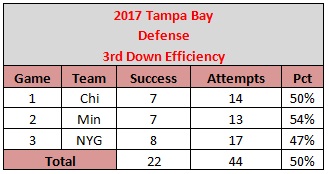 NFL Offenses on 3rd down Conversions

For whatever reason, the second year in Mike Smith’s defense has the 3rd down efficiency going from first in 2016 to last after week 4 on the 2017 NFL season. Although the Bucs have played one game less than the rest of the league save Miami, the defense is still producing third down attempts rates as the last or tied for last in the league.

So I decided to look at Football Outsiders’ defensive metric.

The defensive play strengths have changed between the two seasons. Last year, the Bucs were ranked 13th overall, 6th in defensive pass rank, and 26th in defensive rush rank. 2016’s defense was more reliable than this year’s version and I cannot fathom what specifically has downgraded the secondary’s play aside from two things, CB VH3 is not playing like he was later in the 2016 season and DC Mike Smith is becoming too fancy with his defense.

If the DC Smitty does not corral this defense sooner than later, then the Bucs may very well be into shootouts for the rest of the 2017 season. Yet, all three touchdown scores by the Giants had one commonality – the Bucs’ backup linebackers. While the season is still young, the Football Outsiders metric provides us fans with a bad trend. Or maybe the opposing offenses have discovered a way to neutralize the Bucs’ defense by using hurry-up or no huddles to prevent the defensive line from rotating as well as dinking-and-dunking up the field.