Editor's note: Check out this awesome FanPost by Buc It. Great work.

I always liked to sit in front of the T.V. to watch the NFL Draft and see which players were taken where. What I decided to do this year was to go through all of the stats I could find from the NFL Combine, Pro Days, and game data to figure out why the Buccaneers weren’t successful at drafting. I’ve gone over most of the Buccaneers Drafts and noticed how bad the players were compared to others just based on their workout statistics. Now, I want to see how NFL players, from 1999-2014, performed after being drafted.

As a little background, I decided to simplify the player’s positions. Only wide receiver, quarterback, running back and tight end were not changed. Here is the run down for each simplified position:

I also decided to use the CAV, Career Average Value, which is usually a good indicator of how a person performs in his career. Due to many of the players not being retired yet, I divided it by their possible games played in their career. As an example Gerald McCoy has played 64 games but could have played 80 games. So I divided his CAV by 80. It provides a much clearer picture into current player’s data compared to other players drafted in different years.

I want to thank Pro-Football-Reference for providing the data I used.

The first category is the group of players that did not perform well or never played a game in the NFL. If you take a look at the picture below, over 46% of all Quarterbacks taken fall into this category. As it turns out, only two quarterbacks, Akili Smith and Brady Quinn, taken in the 1st round fell into this category. The least amount out of all of the positions is the linebackers with only 29%. Not until the 6th round do the odds of picking a bad player go up past 50%. So the possibility of finding a player is about 50-50 between the 5th and 6th round depending on the position.

The second group of players was the ones that were just okay. They combined to create the 25% to 50% of the Average CAV/PG. They consisted mostly of Defensive Backs, Linebackers, and Defensive Linemen. The players usually peaked between rounds three through six with it tapering off at both sides. What surprises me is that Offensive Linemen and Wide Receivers are very minimally represented in this group. They are either very good or very bad based on the data.

The third group of players is the good players. They combined to make the 50% to 75% group of the Average CAV/PG. This mostly consisted of Offensive Linemen and Running Backs. Many positions are represented well in this group all the way to round 4 in the draft. And if you needed to draft a position late, a few of the positions show which you can wait for. Also notice that 42.2% of all Quarterbacks taken in the 1st round fall under this category.

The last group is the elite group. They’re the 75% or greater group of the Average CAV/PG. Each position is represented by fewer than 20% of their total players taken in the last 15 years. This group is noticeably filled with 1st round draft choices. But in a few position, you can still find good quality in the 2nd round. After that, you would have to settle for a good player. A quick note, only 11.8% of all QB’s drafted in the last 15 years fall under this category. And only 37.8% of the QB 1st round choices do too.

What does all of this mean for the Buccaneers?

For the Buccaneers, our needs are at QB, RG, RT or LT, and both DE’s. There are a few more but I am simply stating our biggest needs.

Looking at the data for the QB position, it is obvious that the Buccaneers should pick a QB in the first round. The odds of picking a bad QB are only 4.4% and you are 80% likely to pick a good or great QB. If we don’t take that route, the 2nd round would be the best option. After that, you are almost guaranteeing yourself that the QB will be a back-up at best. 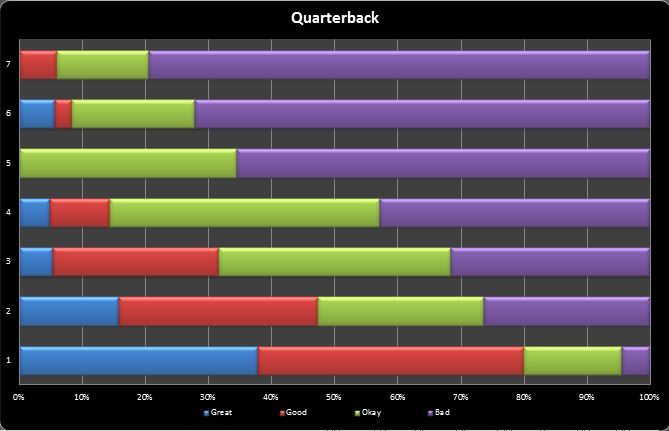 With the offensive line data, you could wait to pick a player, kind of. When you look at the data, it looks like you can wait until the later rounds to possibly pick up some decent offensive line help. But when you dig deeper, many of the successes of later round draft choices are inside linemen, i.e. Centers or Guards. The latest you should choose to draft an LT or RT is in the 3rd round. Overall, you have an 81.3% chance of finding a good or great player in the 2nd round. It drops to 55.7% in the 3rd, 38.7% in the 4th, and starts to level off at 20% in the later rounds. In the 6th and 7th round, drafting offensive linemen give you the best chance of finding a good or great player compared to any other position. 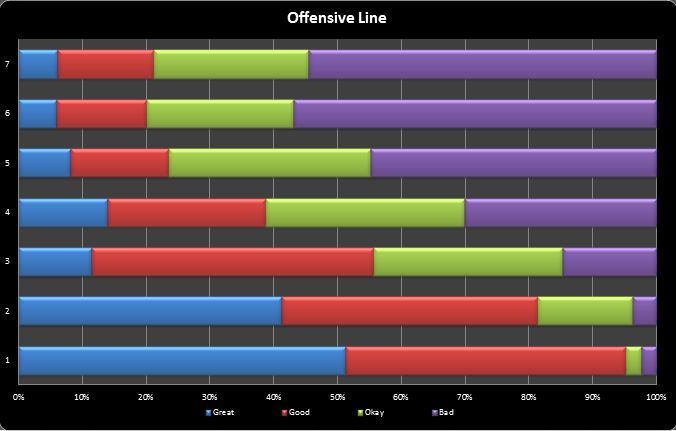 With Defensive linemen, most teams are in a mixed bag of treats. Many people see busts from defensive linemen compared to any other position. However, the opportunity to finding a good to great lineman could be had from rounds 3 to 5. The chances of that happening are 43.7% in the 3rd, 44.8% in the 4th, and 34.9% in the 5th. Only tight ends, running backs, and linebackers have better odds in any of the three rounds but not in all of them. 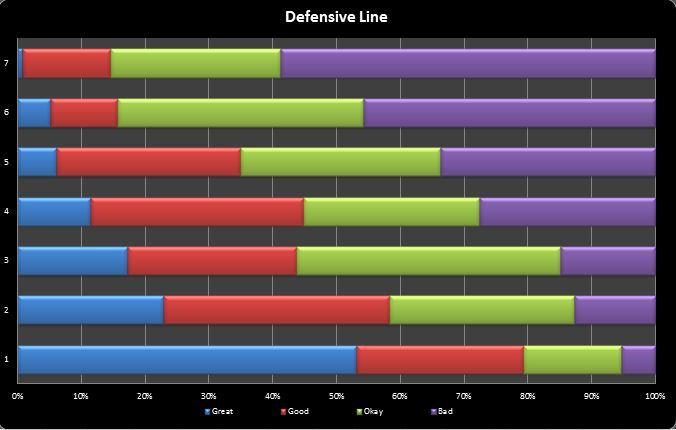 In conclusion, the Buccaneers should draft a QB in the first round. Out of the nine Quarterbacks taken with the #1 pick since 1999, only one was a sure-fire bust. And that was JaMarcus Russell. David Carr, Sam Bradford, Tim Couch, Alex Smith, and Michael Vick all turned out to be decent Quarterbacks but did not live up to expectations of being drafted #1.

In the second round, it should be offensive line. Specifically, RT or LT. The quality of players falling out of the first round for offensive linemen is usually good. That’s due to the fact that many players in skilled positions are taken in the first round. People like Sebastian Vollmer, Matt Light, Orlando Franklin and many more have been drafted in the 2nd round.

In the 4th round, we could go off the need’s train and grab a LB, TE, or RB. Not saying that we need to indulge in these positions but they give the best chance to finding a successful NFL player. Players like Darren Sproles, Marion Barber, Elvis Dumervil, Julius Thomas, and Jordan Cameron were all found in this round.

In the 5th round, I would try for DL, OL, or DB. As I said before, I would only draft a Guard or Center for the offensive line past round 3. For the defensive line, most of the players taken were Defensive Tackles that turned out to be good. Maybe we would be able to move Henry Melton over to defensive end. Known by many, Richard Sherman and Kam Chancellor were both taken in the 5th round. But so were Brandon Carr, Josh Norman, and George Iloka. They aren’t the most physically gifted individuals but they used their skills well.

In the last two rounds, you’re best bet is OL, DB, or WR. This is usually the time you could take risks on players that haven’t been the most "Christian" individuals at school. It’s also a good time to look for big possession WR that have dropped due to their speed or not being acknowledged due to their small school status.

In the end, is this what the Buccaneers will do? I have no idea.