The controversial second-year quarterback from NC State took steps in the right direction on Sunday against Pittsburgh. Like the rest of his teammates, he has to prove that it's legitimate improvement by repeating it this season.

Share All sharing options for: Mike Glennon Took Steps in the Right Direction against the Pittsburgh Steelers

Mike Glennon has been referred to as a future of the Buccaneers at the quarterback position by head coach Lovie Smith. Those words were echoed by by actions, as the Bucs did not draft a quarterback in the 2014 NFL Draft, despite having a shot at all but one of the highly touted rookies available during the proceedings.

"Future" didn't mean "now," however, and Glennon was named the backup upon the arrival of Josh McCown in free agency. Lovie Smith says even now, with the gift of hindsight, that he doesn't regret starting McCown over Glennon, as he believes McCown won the job during the preseason, and defends his decision to roll with the veteran under center.

But McCown struggled through three games, making awful decisions and costing the Buccaneers opportunities to keep the ball, and possibly score, in what would prove to be painfully close games. He would fall apart in the team's third game against the Falcons, and suffer a hand injury that gave him a much needed trip to the sideline for some perspective on how he had been playing so far this season.

Enter Glennon, who struggled during his first snaps of the season, nearly throwing three interceptions against the Falcons and generally looking like the Mike Glennon we all remember from a year ago.

I say "we," because nothing has changed in the way fans in the Buccaneers' fanbase view Glennon. Some think he's definitely a franchise quarterback. Others don't. These sides are often pitted against one another, producing different accounts of the same on-field product.

On Sunday, the on-field product from Glennon revealed a lot of Mike Glennon things: Backfooted throws under pressure that float helplessly to the turf. Short throws on third-and-long that have no hope of turning into first downs. Eyes locked in on receivers that are readable by any defensive back with a pulse.

But we also saw some things that are marked improvements over last year. Things that will ultimately decide whether or not Mike Glennon is a successful NFL quarterback. Let's take a look at one extremely positive example.

One of the biggest issues with Mike Glennon's performance a year ago was his play under pressure. Teams could send A-gap blitzes at Glennon all day, and essentially shut down the Tampa Bay offense as a result, as interior pressure would freeze Glennon like a statue in the pocket.

Not on Sunday. (At least, not on one play in particular.) 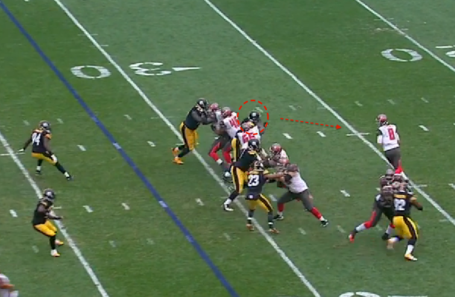 Glennon is facing pressure that is more or less heading right for his face. This isn't an edge rusher with a step on a tackle, this is an interior lineman beating a guard with nothing but a couple of long strides until he piledrives Glennon into the turf.

I would challenge you to find more than a handful (heck, any at all) plays last year that unfolded like this that ended in a positive for the Buccaneers.

The best-case scenario in this instance for 2013 Mike Glennon would be a dumpoff or a throwaway. The worst-case scenario would be a backfooted interception, or a sack while trying to run out of the "bottom" of the pocket to escape. 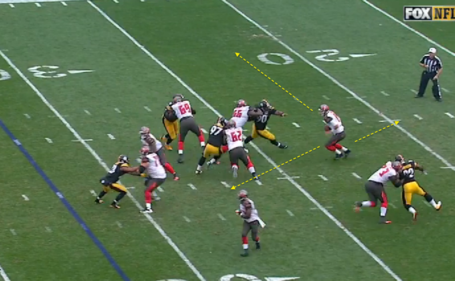 Again, with the pressure now imminent, Glennon has choices. Does he try to run past the rusher to the sideline? (He wouldn't, he knows his own limitations.) Does he try to run backwards and buy more time? (He's done this several times in the past, and usually winds up just falling on the ball for a sack.) Or does he step up into a well-formed pocket, with Evan Dietrich-Smith guiding another pass rusher out of his path? 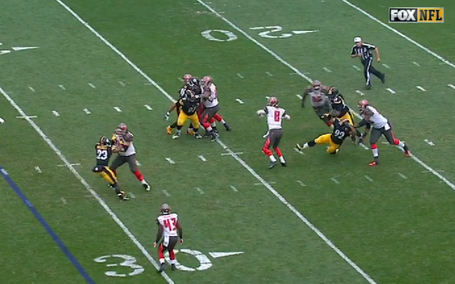 Glennon chooses the best option, and steps up in the pocket. Keeping his eyes downfield. Note, at the bottom of the image above, that there is a wide open Bobby Rainey standing feet from Glennon as he looks to unload a pass. That's not where the Bucs' QB is looking.

Because unlike last year, Glennon kept his eyes downfield, and understood how his receivers' routes would dissect the defense. He was ready to go for the big play, and had kept his bearings enough to make it happen. 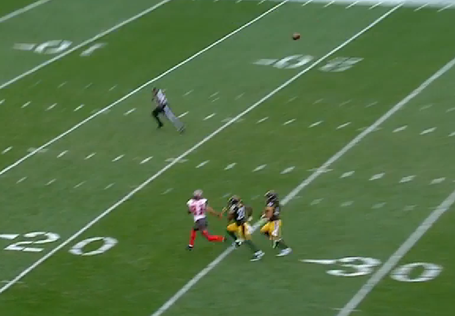 Troy Polamalu had stepped up too far, and Vincent Jackson had a step on his defender, meaning that a well-placed deep ball would result in a touchdown for the Buccaneers.

Ultimately, the ball wasn't well-placed enough, and the pass fell incomplete. But this is a thought process that was foreign to 2013 Mike Glennon, but that showed up at least a couple of times during Sunday's game against Pittsburgh.

The second-year quarterback kept his eyes downfield and was looking to do more than just take what the defense gave him, which resulted in some "close, but not quite" moments on deep throws. The fact that he did so while facing interior pressure is particularly encouraging.

What Mike Glennon did against the Steelers was set the table for proving that he's a better player than a year ago. He's shown signs that he's handling pressure better, and sees how his receivers are interacting with the defense better. Those are things he needed to do after last year's rookie campaign, but it's far too early to say he's got it down and is ready to set the league on fire.

Because for every positive moment, there were still negative plays, including a backfoot throw that could have turned into a costly turnover, and a ball thrown right to Polamalu in the red zone on the play before the field goal that kept the Bucs in contention to win on the final drive.

Yet Glennon still showed signs that he's overcoming some of his 2013 flaws, including his typical poor play in the second half during his rookie season. But none of that matters if it was a one-time occurrence against a banged-up Pittsburgh defense. Kirk Cousins flourished for three quarters against the Eagles, and was exposed when put against a tougher opponent on Thursday Night Football against the Giants.

Franchise quarterbacks aren't accurately identified preemptively based on one game. They're identified retroactively, based on repeated performances that prove a player is a reliable, capable option under center week in, and week out. Glennon shows flashes of "franchise" ability, and the more he's able to repeat those flashes, the closer he draws to shedding the "future" title for a "franchise" title.

Buccaneers vs. Steelers: Tampa bay gets a stunning victory