The Buccaneers' backup QB was under pressure for most of the night. How did he fare?

Unlike the first-team offense, the Buccaneers' backups were very, very poor at moving the ball Saturday against Miami, and especially bad when it came to protecting their quarterback and blocking for the run.

That meant Mike Glennon didn't have as easy of a time as he did against the Jaguars, so we got a chance to see him under pressure on occasion.

Here's a play-by-play breakdown of how he did against the Dolphins.

Glennon bootlegs right off of a play action with the line releasing left, and stops to find Austin Seferian-Jenkins wide open. The throw is a bit behind him (noted by Ronde Barber on the telecast), which limits YAC potential.

Glennon sets quickly and finds Louis Murphy on a slant. Well placed and well thrown for a short gain.

Glennon hits the back of his drop against play action, and has Lane for a very short gain but doesn't have time to get to that read before pressure collapses in on all sides for a sack.

With a blitz coming, Glennon stands in to allow his receivers a chance to get open, and at the last possible moment, he fires to Evans for what should have been a touchdown. 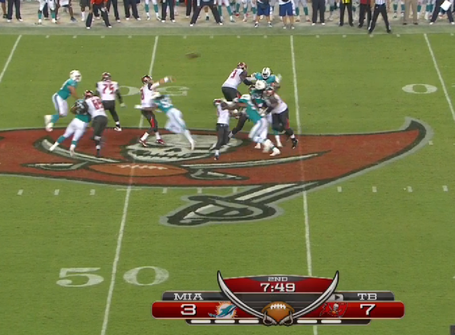 On a deep throw over the middle, the one area where Glennon tends to succeed on deeper throws, he misses Murphy by a narrow margin. 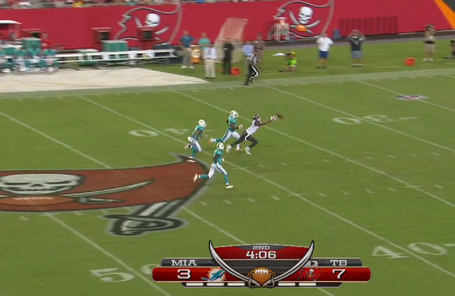 By the time Glennon reaches the back of his drop, he's already got pressure from left guard and left tackle closing in on him. He is forced to take a sack. 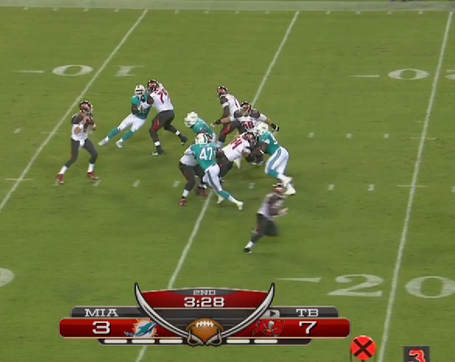 Glennon makes a quick throw to Rainey in the flat for a very short gain.

Glennon finds Wright for a short gain on a quick throw.

With pressure coming up the middle, Glennon stands in to throw a deep ball that is well off target and nearly intercepted. 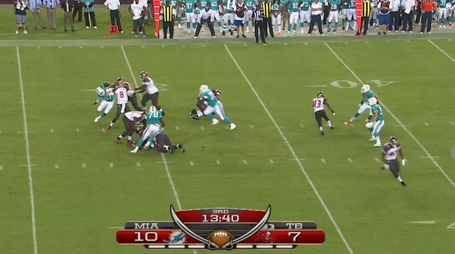 The defender had outside leverage, yet Glennon's throw sailed over his receiver's outside shoulder, and nearly fell short enough for the defender to grab it instead. 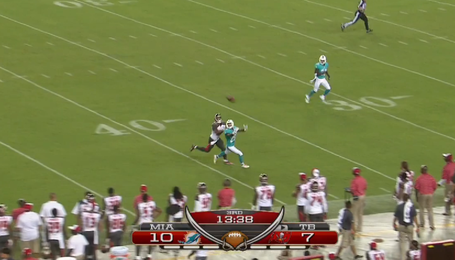 On play action, Glennon faces immediate interior pressure, and finds a short dump-off pass to Pyror. The play is called back for holding.

On a play that the team walked through and practiced hundreds of times during training camp, Glennon lofts a flare out to Demps over the pressure.

In real time, I thought this was an overthrow, but it certainly was not. Demps simply didn't reach out far enough for a good touch pass that would have led him into space.

Described by most as "a sack and a fumble" during the game, this is the lost fumble from Glennon which actually resulted in hitting Jamon Meredith on his wind-up.

It's tough to be overly critical of this play, as it's a bit fluky and largely Meredith's fault, but positioning in a muddy pocket is something Glennon clearly needs to continue to work on.

Glennon rolls right off of play action and throws on the run, and it's a wobbly pass short and behind his receiver (similar to the ASJ throw earlier). The ball is deflected and intercepted, but the initial defense of the pass was too early and aggressive, and drew a flag for pass interference. 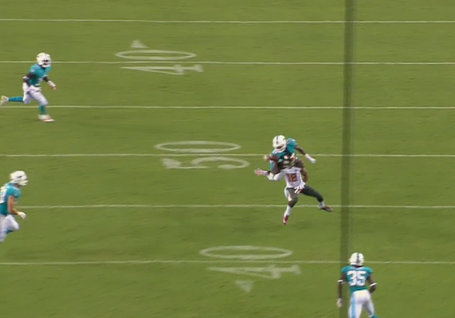 Facing immediate pressure, Glennon does nearly the exact same thing McCown did early in the game. He throws a quick route too far inside of his first read, and it's nearly intercepted.

Glennon throws to Herron as he's coming out of his break, and it's a bit too far outside (could have been a miscommunication/misunderstanding as to which direction Herron would turn), and the receiver failed to make the catch.

Glennon leads Tim Wright for what would have been a nice gain, but the tight end can't hold on to the low throw.

Glennon showed more of the same once again on Saturday evening. Lots of short throws, a couple of nice looking passes on in-cutting routes, and a pension for a poor ball when throwing deep or on the run.

He did handle pressure fairly well, including standing in nicely on the pass to Evans for what should have been a touchdown, but otherwise, Glennon was his 2013 self in a different uniform.

But he has yet to show an understanding for reading defenses, the poise to handle pressure, or the touch and velocity to consistently hit deep throws or throw outside the hash marks. Those will continue to be areas in need of improvement for the "future" of the franchise.