The Buccaneers finally got things going on offense, and Josh McCown was able to show a bit more of what he can do thanks to his teammate's improvements on Saturday night.

Share All sharing options for: Breaking Down Josh McCown's Game Film, Preseason Week 2 against the Dolphins

The first-team Buccaneers offense was improved on Saturday night against the Miami Dolphins, moving the ball down the field more than they did against the Jaguars, and even finding the end zone early in the second quarter.

Better blocking helped set the table for a slightly improved offensive performance, so how did the Bucs' starting quarterback do with a better situation around him? Here is your play-by-play breakdown.

McCown tosses a quick throw to Doug Martin for a short gain.

Facing pressure from both sides, McCown steps up through the pocket and finds an open Mike Evans for a nice gain.

A free blitzer arrives quickly after the snap, and McCown throws in the direction of Vincent Jackson, but misses badly. It could have been an interception.

McCown is looking to push the ball downfield, and hits the back of his drop with no worthwhile targets down the field. His deep options aren't open yet, and his short options wouldn't gain a first down. 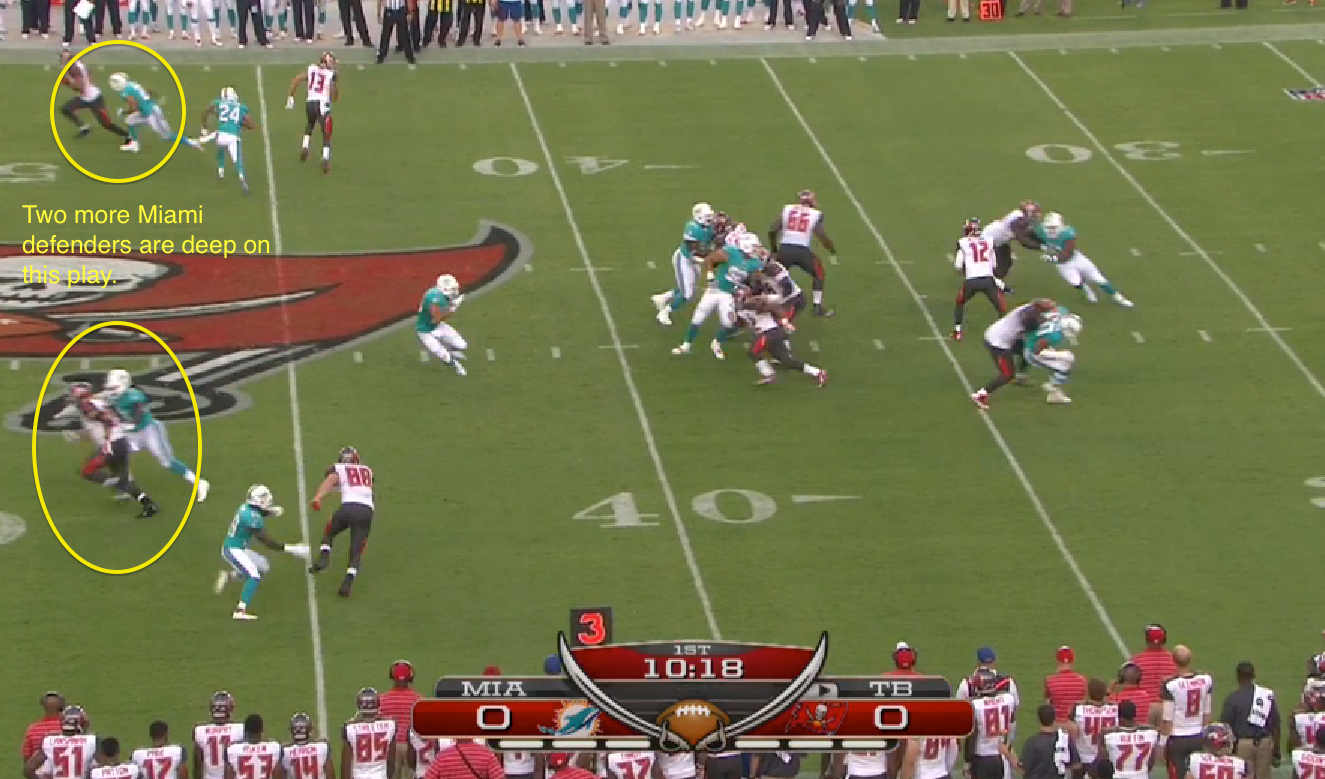 So he keeps the ball and keeps his eyes downfield, and looks to be stepping up to dump the ball off to Doug Martin when he runs into a sack.

McCown rolls out to his right and drops a short pass over a rusher to find Jorvorskie Lane wide open for a nice gain.

Faced with immediate pressure from his right, McCown steps up into the pocket... 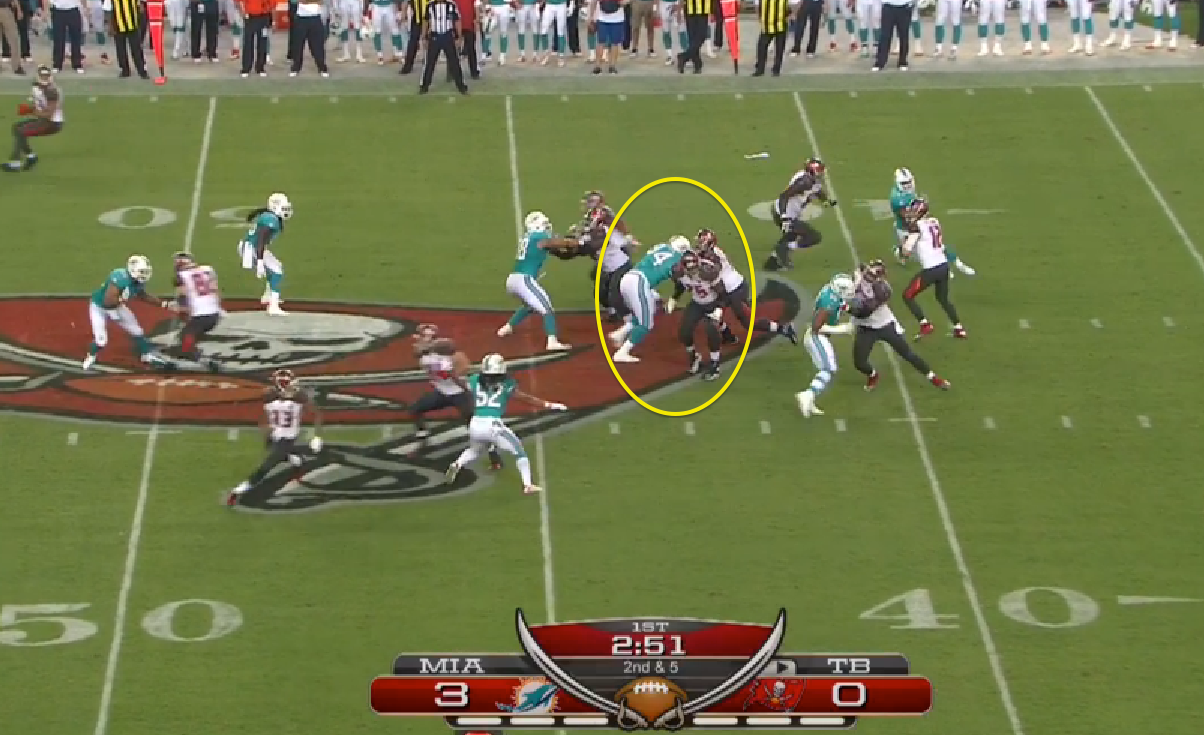 But the pocket rapidly collapses as his interior linemen (one defender is being blocked by both Evan Deitrich-Smith and Oniel Cousins, and neither is doing a very good job) are quickly driven back into his lap. 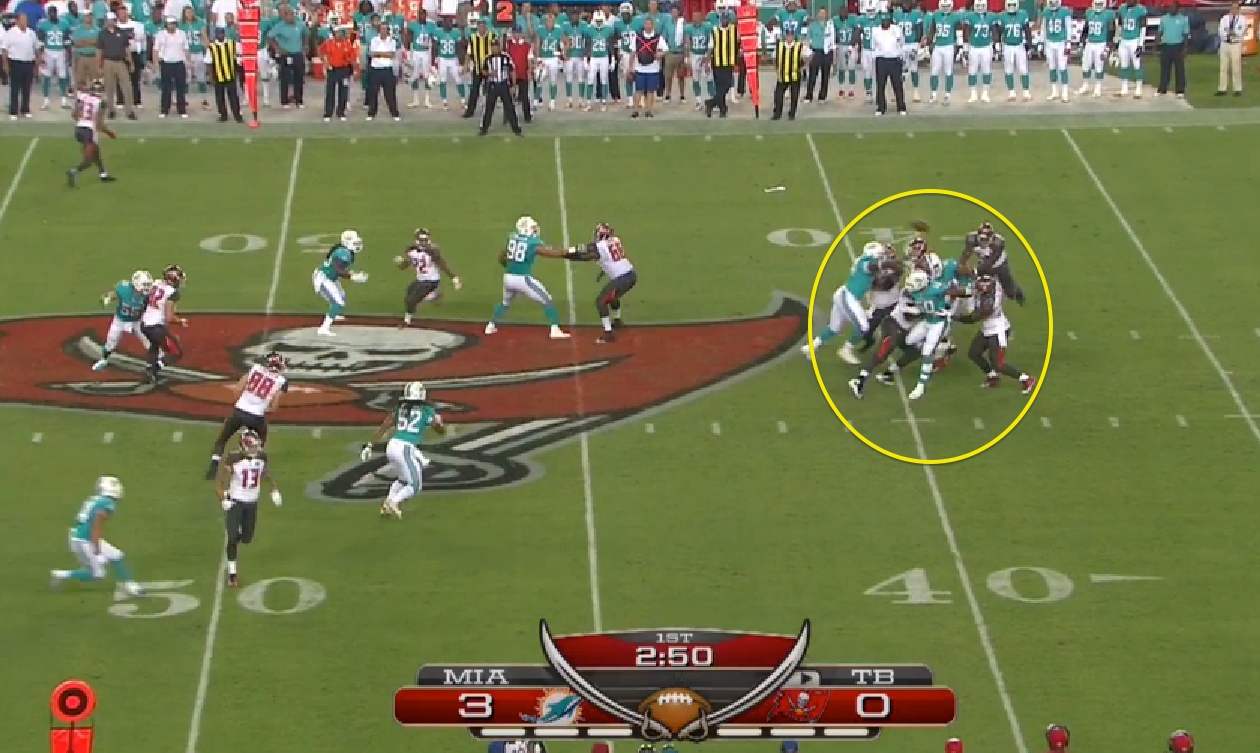 He fires the ball to Luke Stocker's feet to end the play and move on to third down.

Faced with a free blitzer from the right, McCown steps up, tries to find an option downfield, and scrambles with no targets open after he escapes the pressure.

McCown sees Brandon Myers matched up on a much slower defender, and waits for him to break open before leading him away from his man for a first down.

McCown gets a good pocket, steps up, and fires into a tight window in the back of the end zone to find Vincent Jackson for a touchdown.

Apart from an obvious mistake against a free blitzer, McCown didn't look all that bad, but he also didn't do anything "special" against Miami. He did what was expected of him on nearly every play, protecting the football and stepping up to find an open man on a couple of occasions.

McCown has continued to show an ability to navigate a broken-down pocket, something that will come in handy in 2014 as he works to navigate the pass rush behind what could be a frustrating offensive line. But he must make better decisions when faced with a free blitzer, although this may improve as his receivers develop a better chemistry with their quarterback, as well.

Overall, the veteran is on track to "be what he is" this season: an average starting quarterback with good skills under pressure, and an understanding of how to manage an NFL offense.