After a disastrous preseason Week 1 performance, the Buccaneers' offensive line took a step forward in Week 2. Was it a big enough step?

Share All sharing options for: Buccaneers Offensive Line Review: Slight Improvement with Continued Cause for Concern

The Buccaneers offensive line, especially the guards, proved to be the downfall of the entire offense during Week 1 of the preseason against the Jacksonville Jaguars. Oniel Cousins and Jamon Meredith couldn't do anything to win their matchups in the run or pass game, and things got ugly in a hurry.

On Saturday against the Dolphins, things were a bit improved, as the first-team offense was able to pick up a couple of first downs and eventually score. But things are still far from "good."

Patrick Omameh slotted in for Meredith at right guard, and didn't have a ton of notable mistakes. During the last drive for the first team offensive line (which was also Mike Glennon's first drive), he blew his block on a run play and allowed interior pressure leading to a sack on a pass play. He otherwise seemed to play fairly well, and was used as a pulling guard on multiple occasions.

Oniel Cousins was definitely not as bad as he was in Week 1, but there is still cause for concern. On the very first pass play of the game, he let Jared Odrick push him right into McCown's lap. This wouldn't happen on every play, but it would happen a few more times over the first two quarters. 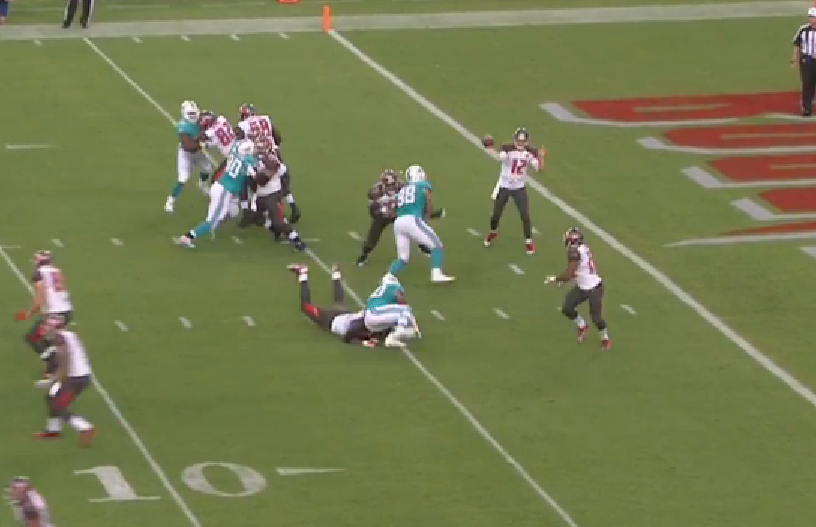 Cousins did do a couple of good things in the running game, but did miss a cut block on one occasion.

A week after earning a brutal run grade from Pro Football Focus and generally looking overpowered when manning-up against defensive tackles, we saw more of the same from the Bucs' new center.

When faced with a one-on-one against a tackle in the running game, EDS is almost always on skates, getting pushed backwards and getting in the way of designed running lanes and cutbacks.

He's looked fine against the pass, and does a decent job of helping out his guards when he's not given a one-on-one matchup, but in the running game he's not been consistently gaining ground. 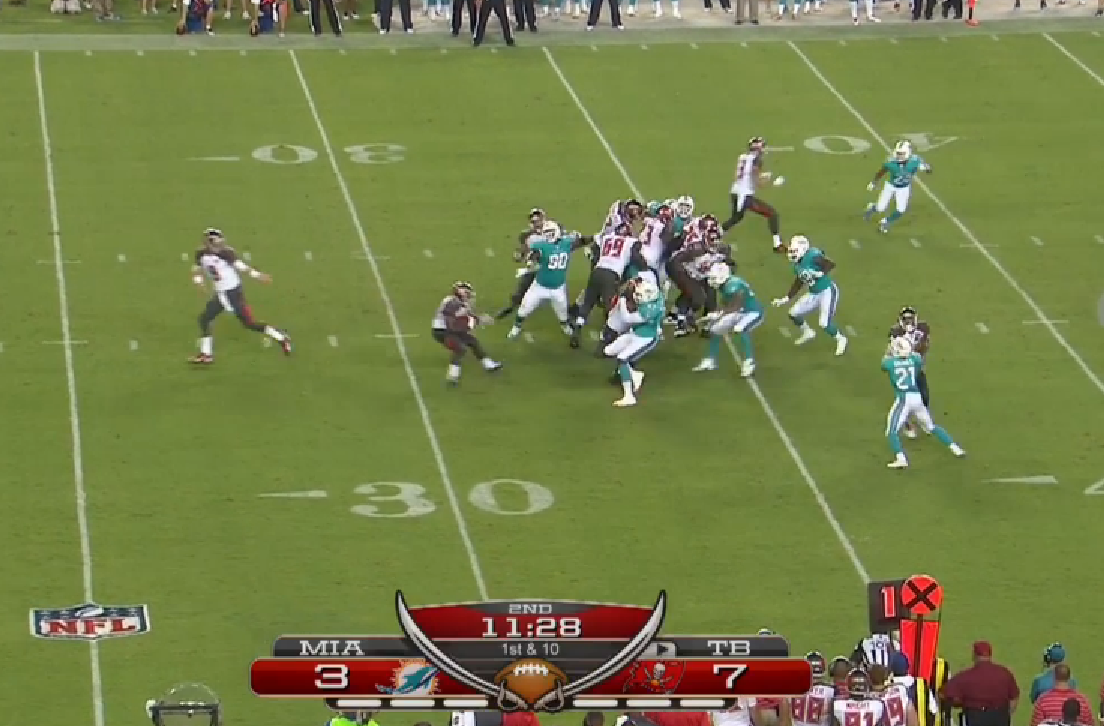 Had EDS been able to sustain his block and keep Earl Mitchell out of the backfield, there's a great cutback opportunity for the back.

Demar Dotson is one of my favorite players on the Bucs, as he's regularly underrated by national media who don't know his name, and assume he's not a very good player. Saturday's game did nothing to change any minds about the unsung right tackle for the Bucs, as he was regularly beaten by Cameron Wake in the passing game.

Wake is one of the premier pass rushers in the NFL from the defensive end position, so it's tough to be too harsh on Dotson, but he still did not turn in a good enough performance. Check out this poor effort from early in the game: 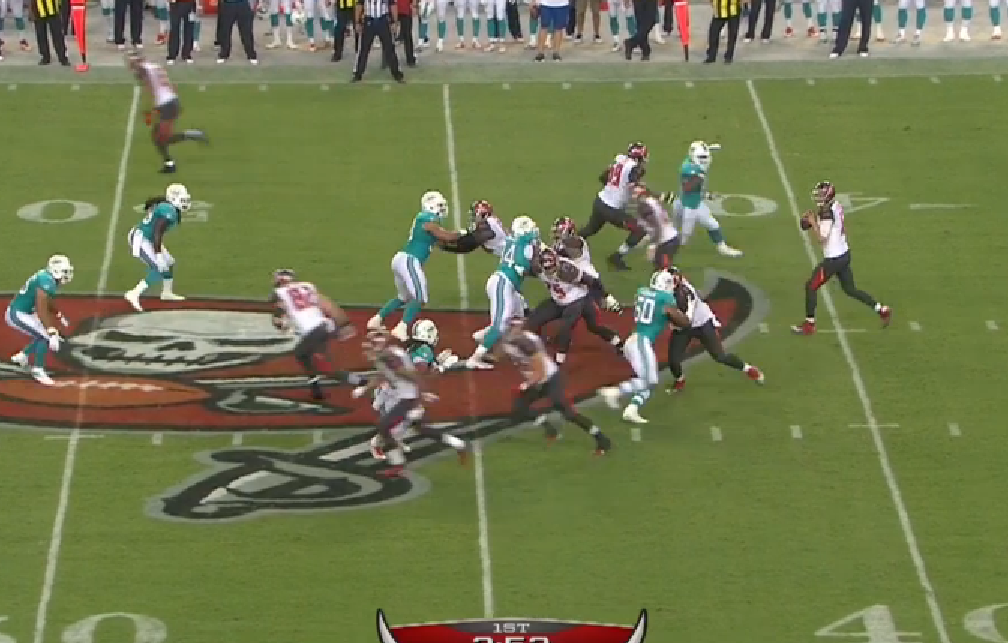 Anthony Collins didn't have a perfect night, but he was certainly better than Dotson. He did "allow a sack" as Olivier Vernon got to Mike Glennon, but there was pressure from right guard (Omameh) that forced Glennon to step sideways, right into Vernon's rush against Collins.

Collins has been fine to my eyes this preseason, keeping everything in front of him and generally looking like the good pass-blocking tackle he was signed to be. He hasn't been stellar (Branden Albert, who the Bucs were reportedly interested in this summer, did have a very good game against Michael Johnson), but he hasn't been bad by any means.

I still believe the Buccaneers need to start someone other than Oniel Cousins at guard. Cousins doesn't have any untapped potential at this point in his career, and has enough tape telling us that he's just not good enough to play regularly on the NFL level.

Omameh, on the other hand, does have some uncertainty left, and there's hope that he can continue to improve and be coached into a passable right guard. He certainly did better than Jamon Meredith, and that showed in the Bucs' ability to sustain offensive drives on Saturday night.

But the real concerns are the poor showings from Dotson and Dietrich-Smith. If they continue to struggle, the Bucs will be in trouble this season. They were facing very tough competition on Saturday, and weren't getting much help from their guards, but they must be the anchors of the line with the lack of talent between them.