A look back at Glennon's performance against the Jaguars reveals a moment of brilliance surrounded by a very 2013-esque performance from the Bucs' backup quarterback.

Share All sharing options for: Buccaneers vs. Jaguars review: Mike Glennon struggled more than you think

The Tampa Bay Buccaneers ruffled plenty of feathers in Bucs Nation by signing Josh McCown this offseason and immediately naming him the starter. In doing so, the Bucs replaced Mike Glennon with an unproven veteran, sparking intense debates fueled by the divide over the quality of Glennon's play the year before.

So this preseason, everything the two quarterbacks do will be under the microscope. And rather than scout from a box score or just use first impressions, we'll take a look at the film and determine which player performed better according to the eye in the sky.

Here is a look at every play Mike Glennon was involved in on Friday evening.

On this play, many thought in real-time that Austin Seferian-Jenkins dropped a low pass from Glennon. And while it’s not 100% clear from the video feed, it appears as though the Jaguars’ middle linebacker actually drops an interception, and it falls to the ground in such a way as to land in front of ASJ.

Regardless, it's a very dangerous play from Glennon. 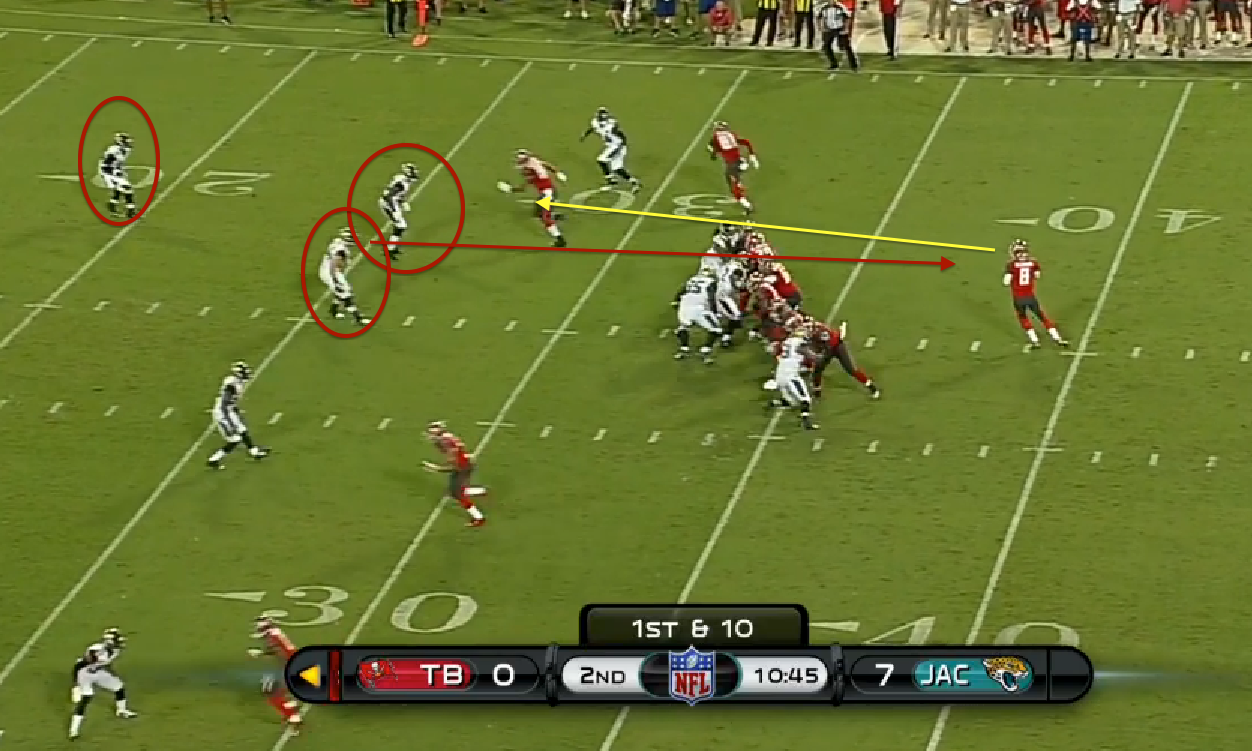 Glennon never looks anywhere else, staring down his big target going up the seam and cutting in (one of Mike’s favorite routes to throw). 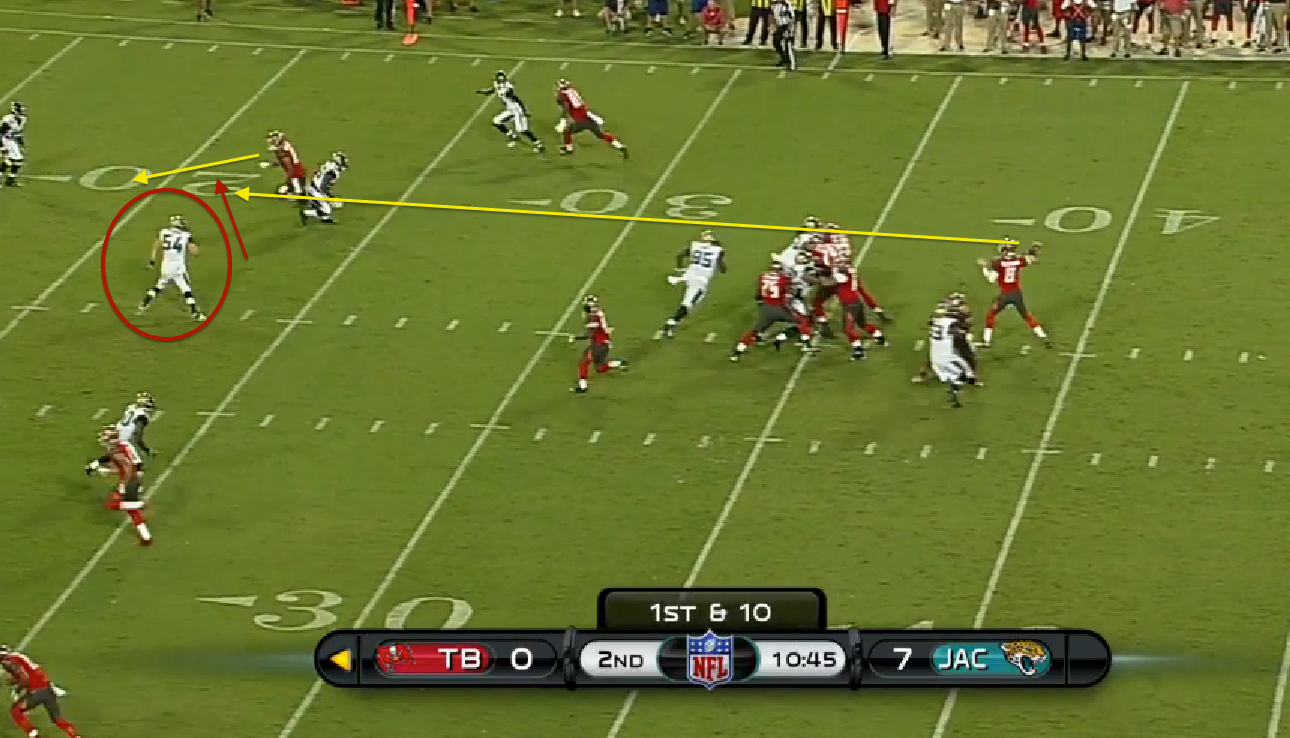 But the linebacker sees it the whole way and breaks on the play, cutting it off. 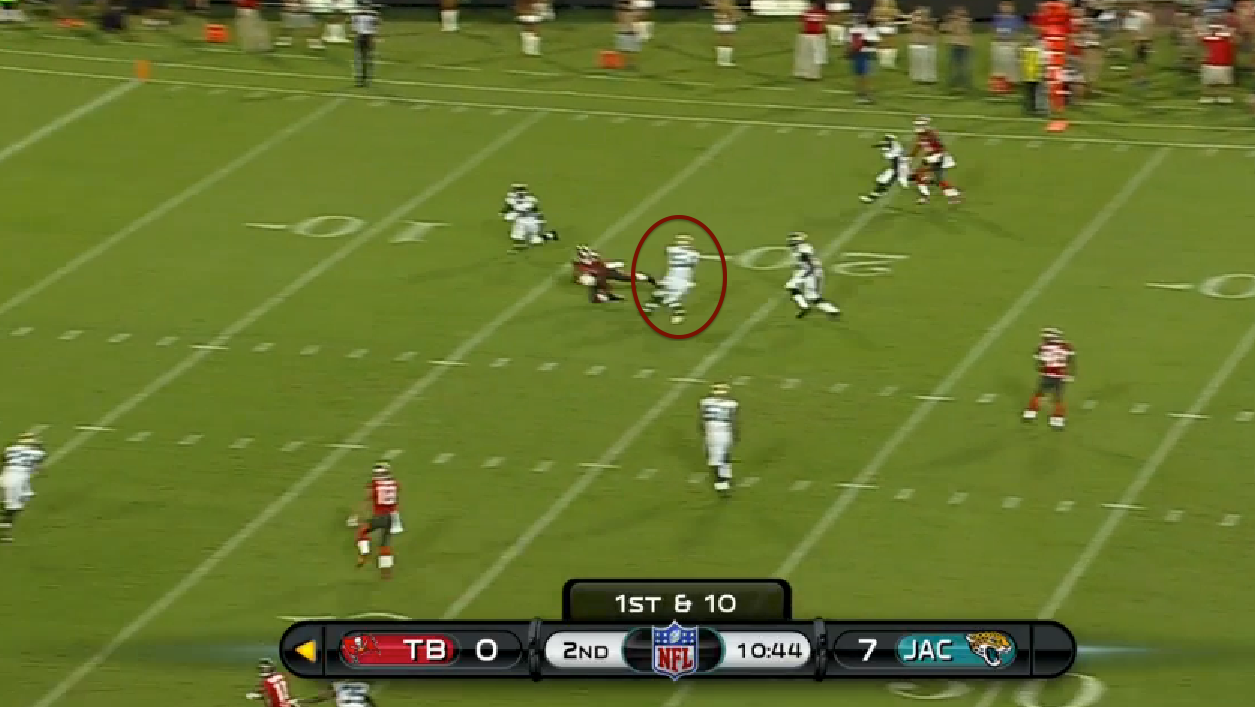 A better Mike linebacker turns that play into a long interception return the other way.

Glennon makes a very quick throw in the flat to Tim Wright, and the defender closes quickly and makes the tackle for a short gain. The ball was not thrown perfectly, but not poorly either. A fine play to build some momentum on offense.

Glennon is looking for Evans the whole way, and simply sails it way over his head. He had plenty of time to throw and saw no interior pressure (the Jaguars had put in their backup defensive line). He simply airmailed the pass. 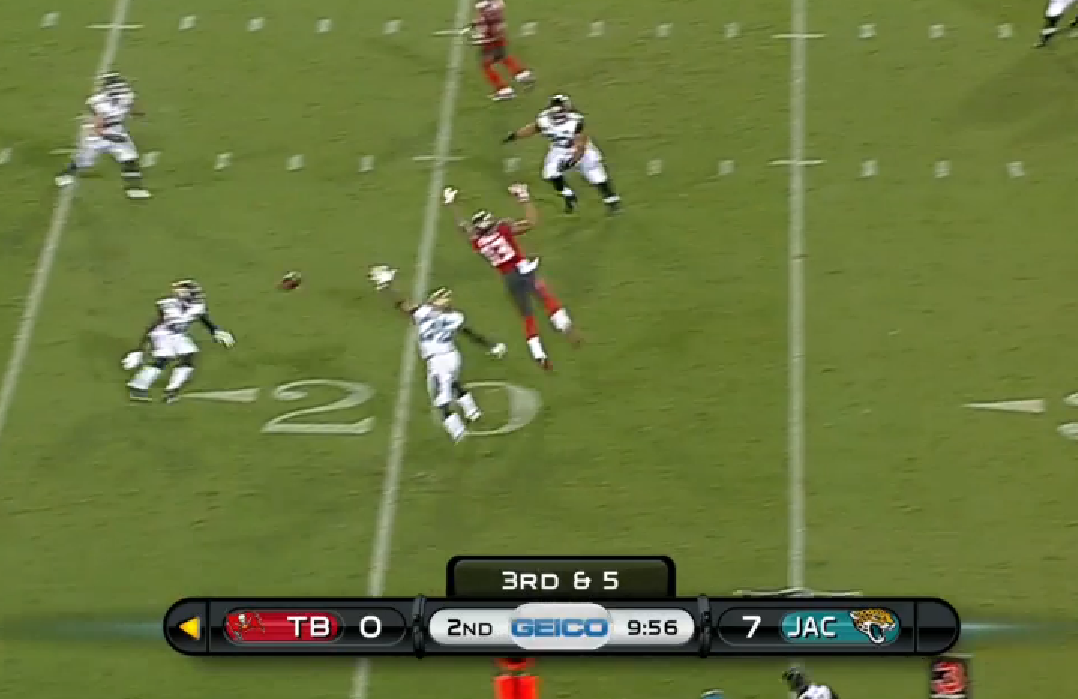 Faced with quick pressure from the left and interior, Glennon gets a quick flare out to Sims for a short gain.

Faced with immediate pressure from the right and interior, Glennon lofts a short pass over a rusher to Sims. The play ends up well short of the first down marker.

Glennon sets and throws very quickly, and finds Murphy on a very quick slant. He placed the ball behind his receiver, as the Mike linebacker was lurking toward the middle of the field, protecting his target but limiting YAC opportunities.

Glennon picks out Murphy cutting into an open pocket of space behind a short corner and a deep safety as the Jaguars drop back in a deep shell for the two-minute drill. A well-placed ball into the window that leads the receiver out of bounds to stop the clock. A very positive play for the young quarterback.

Faced with immediate pressure from his right, Glennon tries to unload quickly to Wright but looks to have his arm hit as he throws. The ball falls incomplete.

Miscommunciation? Under no immediate pressure, Glennon fires way over the head of Murphy, sailing past all the defenders into green grass 5-10 yards past any other player. Murphy had a defender underneath and over top, so I'm not sure the throw was a wise decision in the first place, and the breakdown in communication may have been a blessing in disguise.

Faced with pressure from his right, Glennon throws to Wright, and throws behind him as a defender (and the referee) are in front of him. Wright can’t hold on, and the play probably wouldn’t have earned a first down anyway, it looked to be about a yard or two short of the sticks. Would have at least allowed for a field goal, though.

Glennon is faced with pressure from the right (the player was offsides), and throws to Hawkins. He sails it over his head on a comeback route.

Glennon has time to throw and finds Murphy for a 10-yard comeback completion.

Glennon bootlegs right, and has no one in his face. 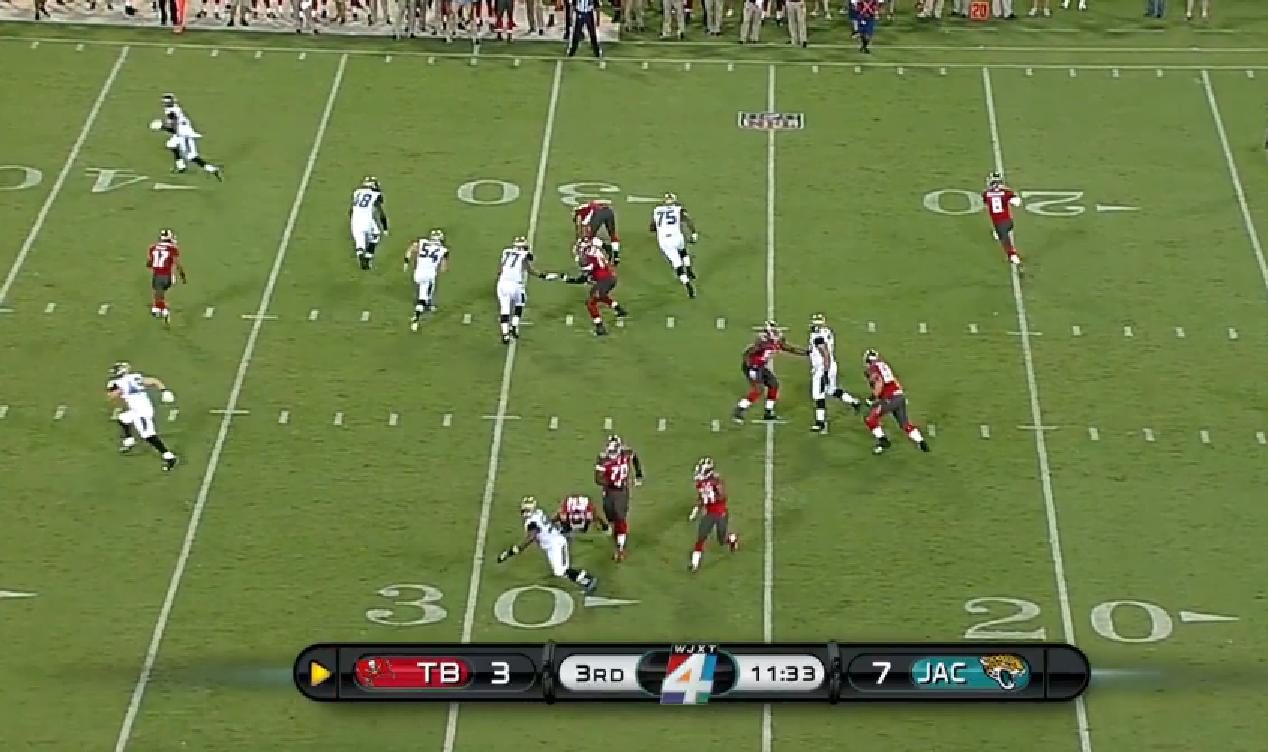 He throws on the run, and it winds up well short and behind Tim Wright, closer to the defender underneath him, who is nearly able to pick it off. 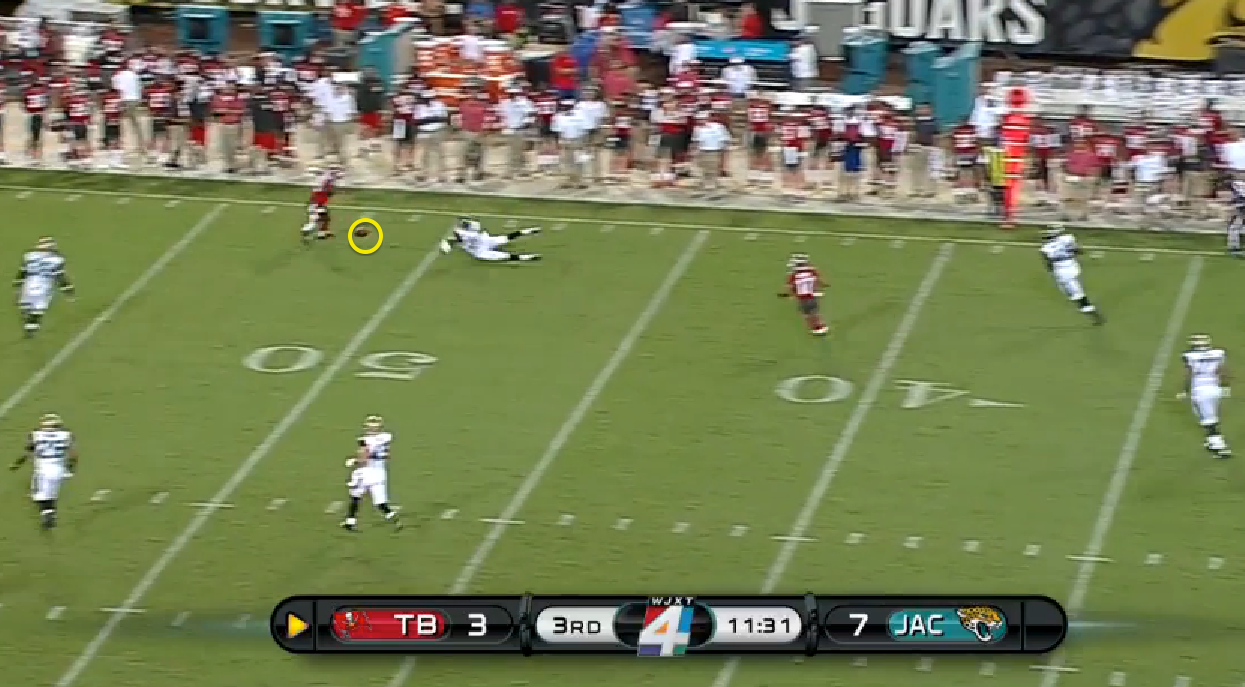 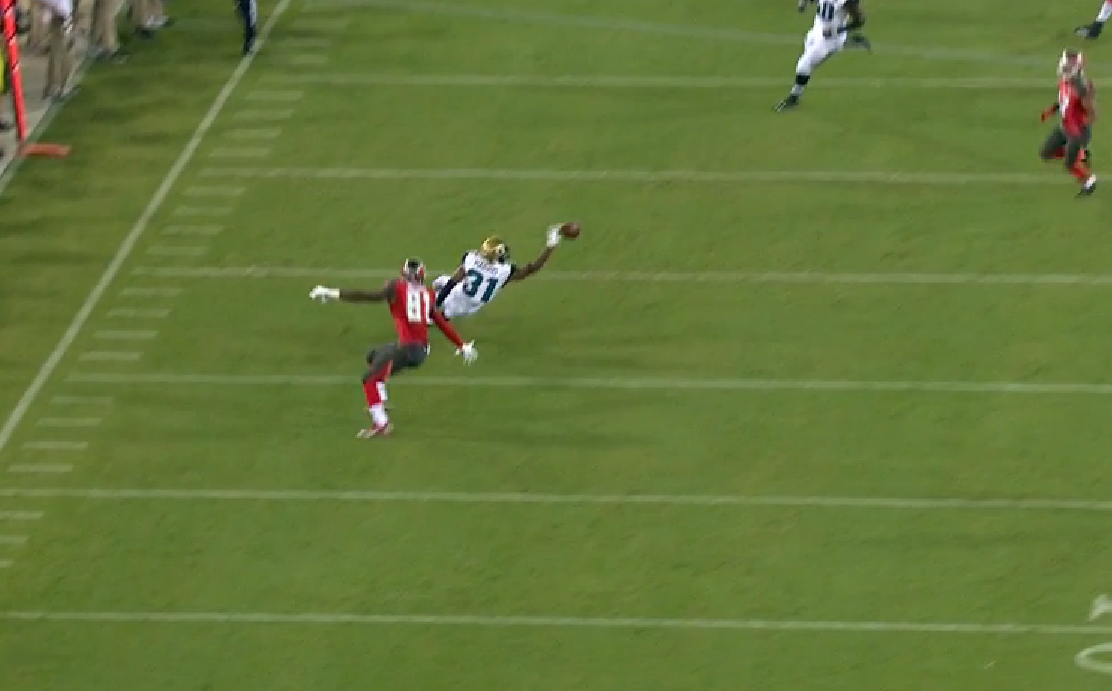 Quick throw, no pressure, finds Murphy on a comeback with nice ball placement to shade the throw away from the inside defender. The defender was in such tight coverage that he was called for pass interference, so an especially good play to find a receiver in a tight spot.

Tim Wright is left alone against an edge pass rusher 1-on-1 as the Bucs try to set up a screen, but there’s no time to set up the play as Glennon gets sacked. The edge rusher times his jump well, as he did all night against Glennon, and former lineman Stephen White suggests the rusher was using Glennon's hands to time to snap.

Glennon has been catching his teammates off guard during camp by doing a hard count with his hand motions, but when it's not a hard count, he makes it very obvious when the snap is on its way.

Glennon steps up in the pocket and checks down to Mike James, who runs for a nice gain but not enough to convert the very long third down.

Glennon almost gets caught in his indecision like McCown was, as he decides to bring the ball down with a defender reaching for his arm. 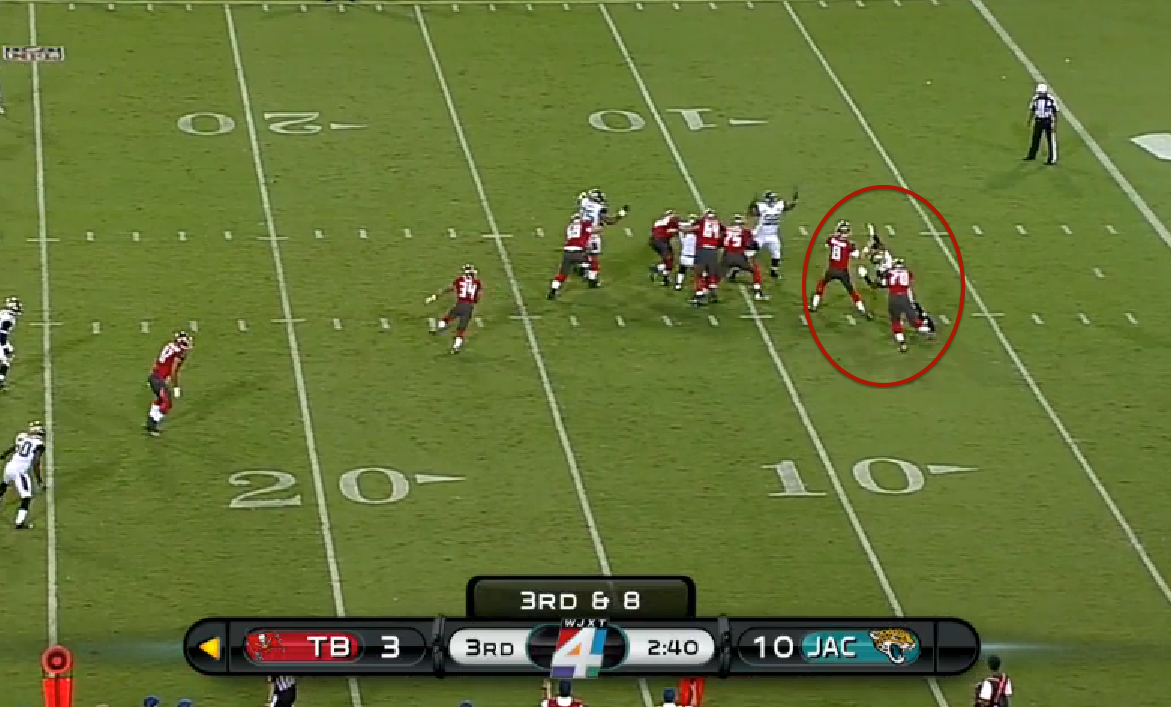 He avoids disaster and steps up, finding ASJ who sneaks around his defenders into open space for a nice gain. One of the defenders in ASJ's zone stepped up to stop the run, and the tight end snuck in behind him to make the play.

Play action to Sims allows Sims to leak into the flat uncovered, Glennon drops it off for a nice gain.

Glennon looks for Herron on a quick in, and throws before he comes out of his break. But he mistimes it, and winds up putting it behind Herron, who makes a nice reach back to grab it. Herron could have ran with the ball on a better throw. 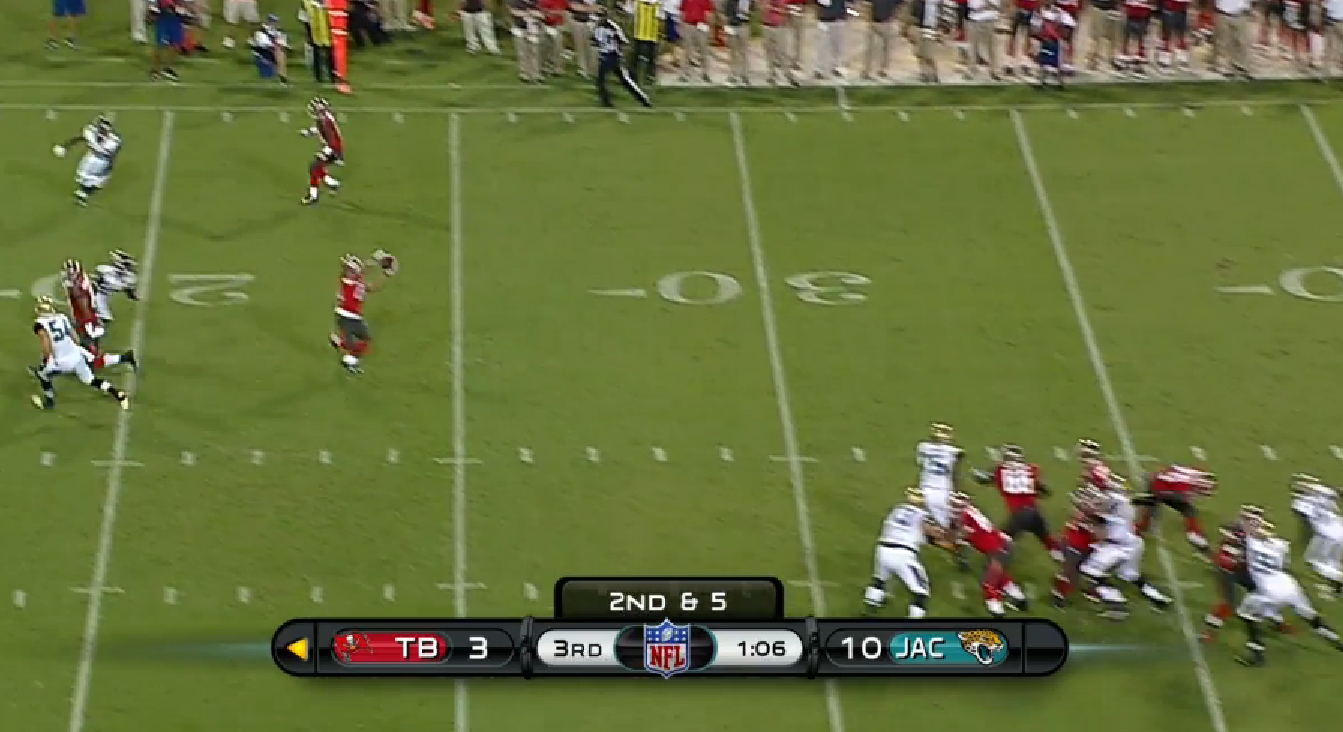 Glennon badly under throws a fade to Herron, as it hits the defender in the back.

Glennon looks right, then left, and comes back to the middle to find Streeter. I'll let the images tell the story. 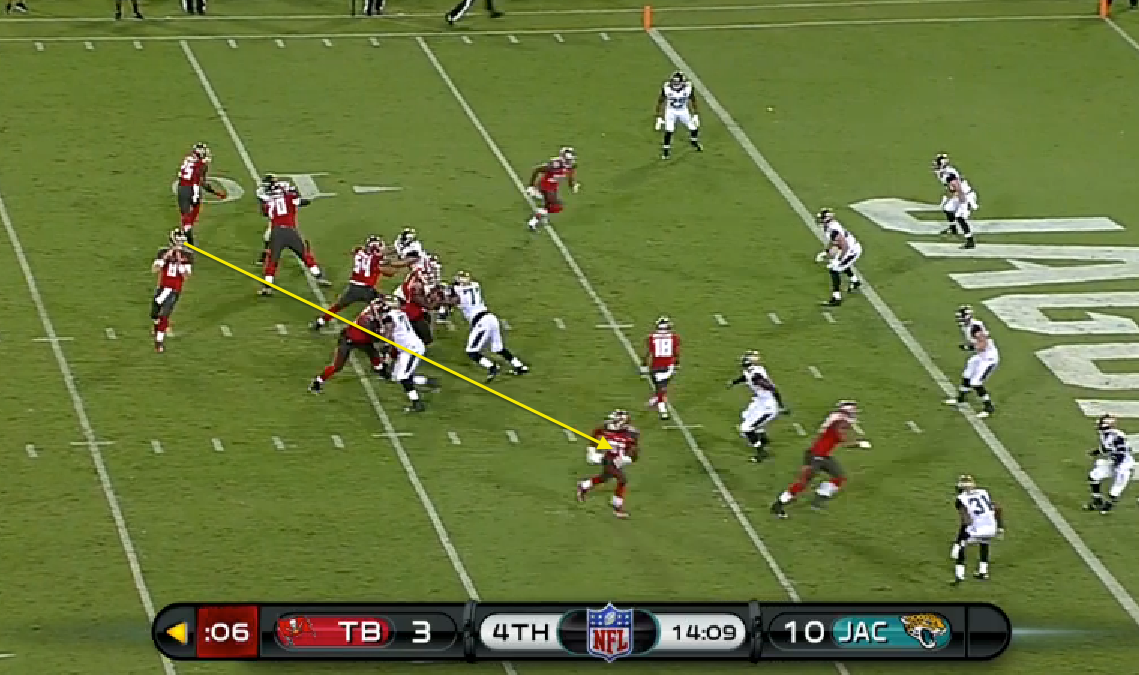 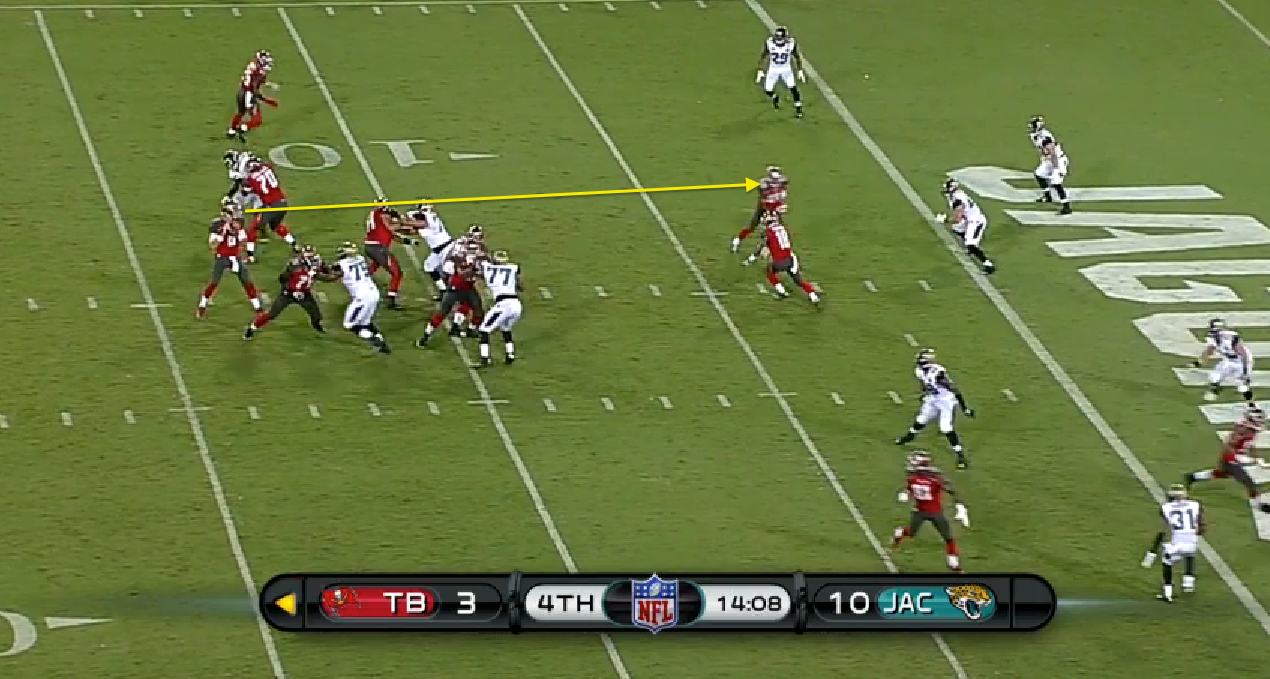 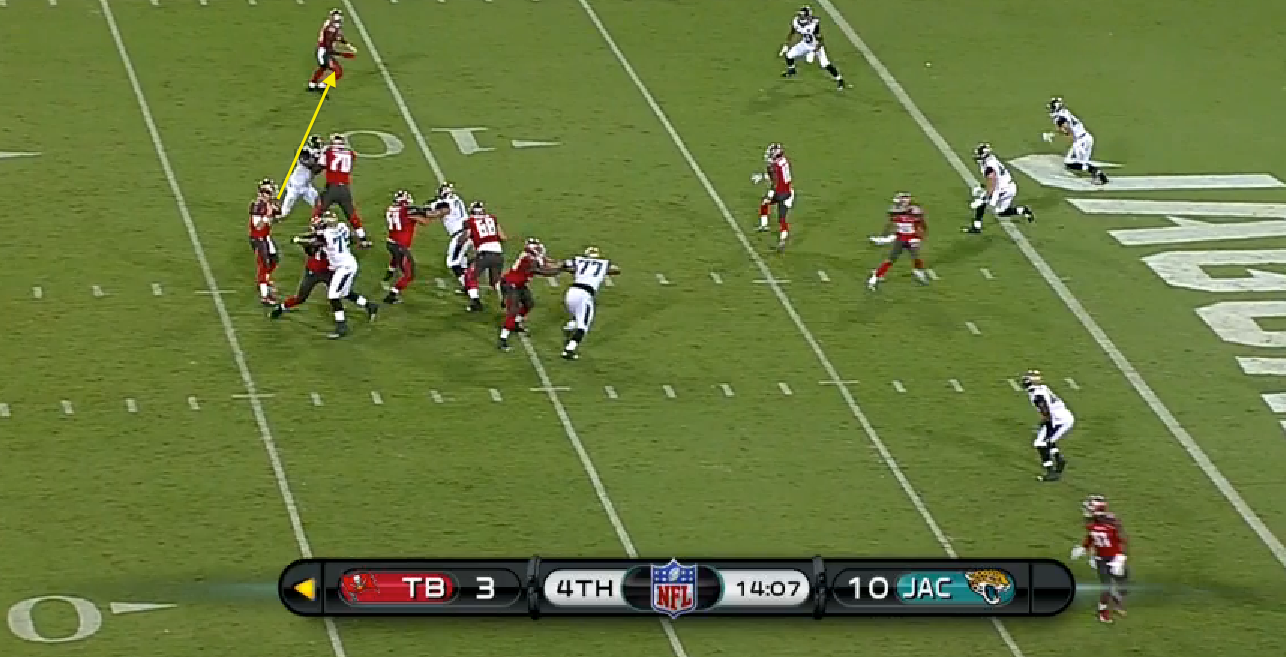 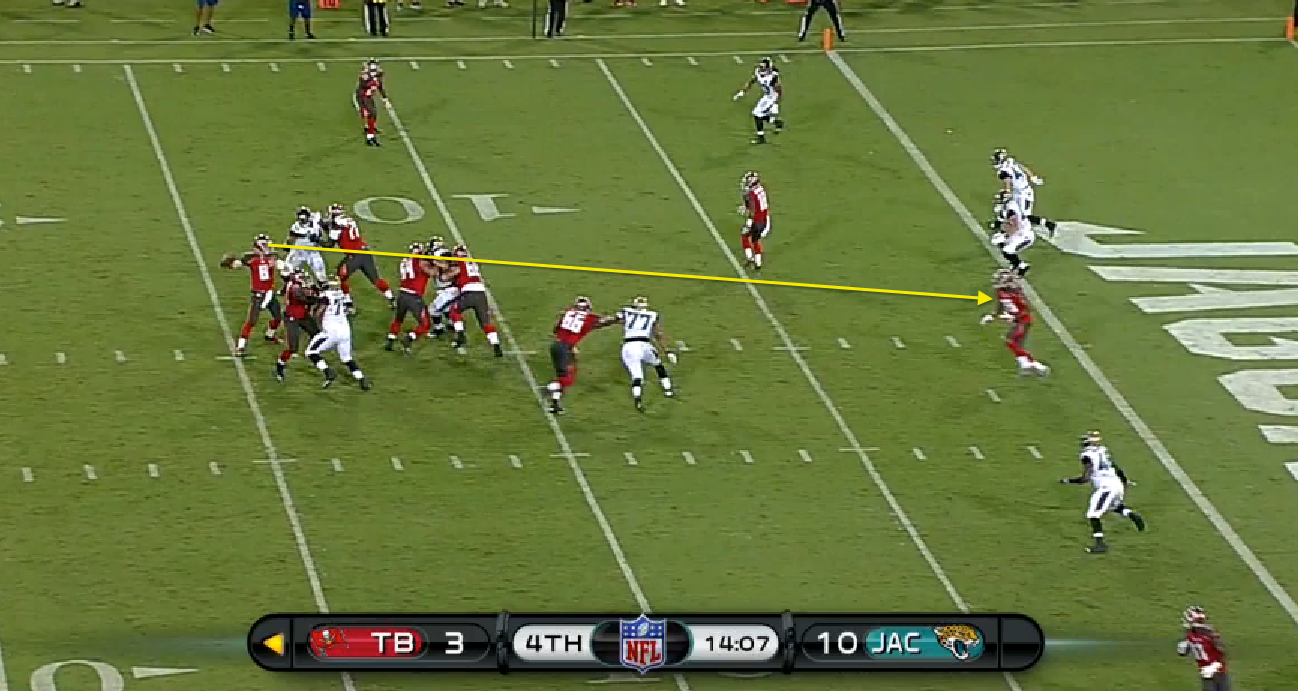 A very impressive job of standing in the pocket and going through reads to find the right option. He had a check down that would not have scored, but he waited one extra second, and found the perfect throw. This is something Glennon didn’t do much of in 2014.

Mike Glennon looked like 2013 Mike Glennon for most of his 2014 debut against the Jaguars. He faced significantly less pressure than Josh McCown, and it showed in his ability to stand in the pocket and pick out a few throws to Louis Murphy that would have been impossible against the Jacksonville starting defensive line.

There are still issues of inaccuracy, poor ball placement, and an inability to throw deep or on the run. There are still concerns of being too locked in on a particular target.

But there were a handful of plays that showed improvements over last season, particularly the final touchdown pass to Streeter. The question remains, is that something Glennon can do under pressure, and on a regular basis?

He has the rest of the preseason to show us the answer to that question.