A play-by-play look at the Buccaneers' veteran quarterback's first game under center is full of high-pressure situations, and McCown definitely didn't navigate them as well as expected.

Share All sharing options for: Reviewing Josh McCown's performance against the Jacksonville Jaguars

The Tampa Bay Buccaneers ruffled plenty of feathers in Bucs Nation by signing Josh McCown this offseason and immediately naming him the starter. In doing so, the Bucs replaced Mike Glennon with an unproven veteran, sparking intense debates fueled by the divide over the quality of Glennon's play the year before.

So this preseason, everything the two quarterbacks do will be under the microscope. And rather than scout from a box score or just use first impressions, we'll take a look at the film and determine which player performed better according to the eye in the sky.

Here is a look at every play Josh McCown was involved in on Friday evening. (A Mike Glennon version will come later.)

With Immediate interior pressure, McCown throws in the direction of Martin just to avoid a sack. It sails out of bounds, incomplete.

For this play, we'll go to the photos to show just what happened. 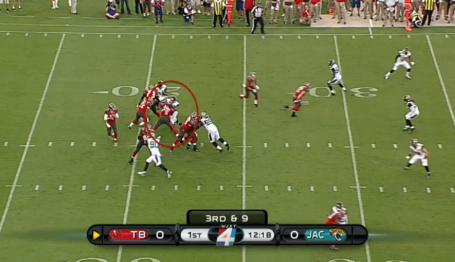 Immediately off the snap, Oniel Cousins is being beat to the outside, (a common theme on the night), which will prevent McCown from being able to step up in the pocket as intended. 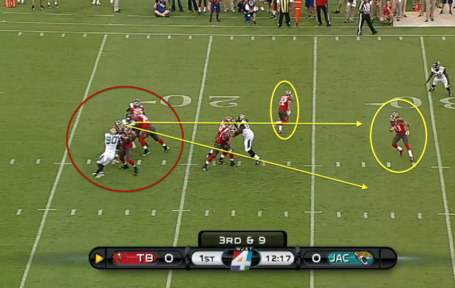 But even as he's being sandwiched between Jacksonville rushers, McCown's eyes are downfield, and he has options that are in his view. 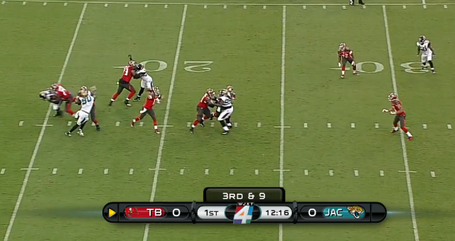 The veteran is able to step up and fire downfield, but as you can see, there's holding (unneeded holding) going on behind him that would call the play back.

It was a good display of sorting through the trash in the pocket from the veteran, something he'll be called upon to do quite a bit this season.

With immediate interior pressure. McCown winds up with a defender hanging on his foot (who had his helmet ripped off by Cousins) and throws short to Martin no time to hit a deep route. The penalty is declined, and the Bucs punt.

Immediate interior pressure again on this play. McCown steps unto throw but Marks has already beaten Meredith and hits his arm, like this: 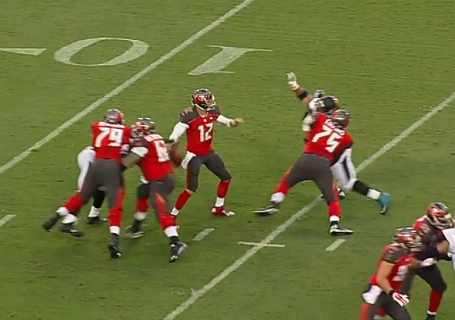 McCown was actually preparing to pass, but Marks got his shoulder just as he started his wind up. The pressure was immediately in his lap.

The Bucs' QB picked up the fumble and scrambled for a short gain, and amid the chaos, a Jacksonville defender held a Buccaneer receiver downfield to draw a flag and a first down.

Immediate interior pressure again. Sensing a trend? McCown steps up into Anthony Collins and his man, who slips past Collins for the sack. No time or space to do anything, as the guards both allowed their rushers to get upfield in a hurry.

Multiple blitzers come through the middle, one is picked up by Rainey, another is on a delay and shoots through the gap uncontested. McCown throws off of his back foot and while he had Evans open... 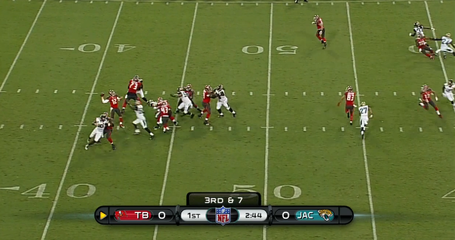 He sailed it over his head because he lost control over his power by throwing from a poor stance.

McCown on a bootleg again, and has a defender in his face the entire time. He throws off of his back foot on the run, but had more time to consider the physics of throwing from an unstable base and drops it in nicely to Vincent on a comeback.

McCown's receivers are running verticals on the outside, and he is looking for that the whole way. He steps up in the pocket, has a couple of short options... 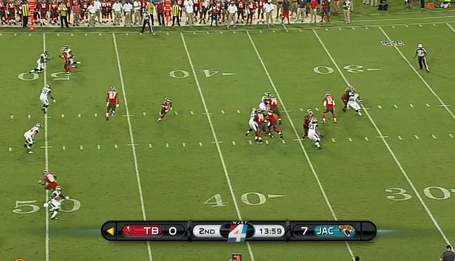 But he is indecisive, and is caught changing his mind as he tries to bring the ball back in rather than throwing, at that moment he’s hit and fumbles. This is a rare moment in which McCown could have been better served being like Mike Glennon, and simply taking the checkdown.

It was 3rd and 10, and on 3rd and 10 I would much rather see my quarterback looking downfield to pick up a first. But getting caught on the fence as a quarterback is a recipe for disaster, and it ended in a turnover for the Bucs.

At least Mike Glennon is always confident in his decision to throw a 3-yard route on third-and-long. This is the kind of mistake McCown must avoid, especially with the pressure he's likely to face this year.

Josh McCown did not have a good game on Friday night. His two huge mistakes were exacerbated by a poor offensive line, but he has to handle the pressure better than he did in the preseason opener.

Last season we saw McCown flourish under pressure for Chicago, something he showed glimpses of on Friday night as well. But on the whole, his errors were far more costly than his positive moments were encouraging, and he has work to do to be the kind of starter the Buccaneers need in Week 1.