Breaking Down the Leslie Frazier Defense: A Safer Approach to the Cover 2

Leslie Frazier has said that his defensive philosophy for the Buccaneers is very much in line with the Lovie Smith defense. But what does Frazier's Minnesota defense tell us about his defensive schemes and ideals?

Share All sharing options for: Breaking Down the Leslie Frazier Defense: A Safer Approach to the Cover 2

"It'll be very similar to what he did in Chicago, and what he did when was working with Tony, Coach Dungy here."

Those were the words of new Tampa Bay Buccaneers defensive coordinator Leslie Frazier when he was hired in January.

But a look at the actual Leslie Frazier defense from his days in Minnesota reveals a slightly different story.

Lovie Smith's defense has certain traits that make it stand out from the defenses Buccaneer fans remember from the Monte Kiffin era. Similarly, there are elements of a Leslie Frazier defense that are unique to the former Minnesota head coach's take on the Cover 2.

"Lovie was a little more OK with gambling from the LBs and CBs to create turnovers, and Leslie liked to play a bit safer."

I had the chance to talk about Frazier's defense with Arif Hasan of Vikings Territory (and a few other websites, you can follow him on Twitter here.), and it's something that's made quite obvious when considering the statistics produced by Frazier's defenses as compared to Smith's.

Defenses coached by Lovie Smith have finished in the top-10 in takeaways in the NFL nine times since 2001, while since 2003, Frazier has only coached two top-10 turnover defenses.

Obviously there are some differences in talent between the rosters in this discussion, but even from 2008-2010, when Frazier had the Minnesota defense at its best, his team wasn't producing turnovers at the same rate as a Lovie Smith defense.

And as Arif mentioned, that boils down to playing safer, more assignment-sound defense, rather than incorporating the aggressive, turnover-inspired changes that Smith adds to his coaching.

One of the tenants of the Leslie Frazier defense, according to Hasan, is preventing first downs. The "punts as turnovers" principle is strong with Frazier, who seeks to limit damage and keep plays in front of his defense, rather than going with an aggressive approach.

By Frazier's second year in charge of the defense (2008), the Vikings became top-5 in the NFL in not allowing first downs. They would remain a top-10 first-down preventing defense until 2011, Frazier's first full year as head coach of the Vikings.

Let's take a look at a basic Cover 2 call in Frazier's defense, and see what makes it work. 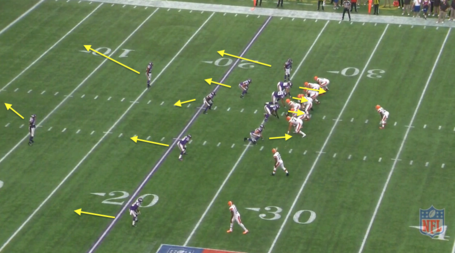 This particular play features a nickel defender in the slot because of a likely passing situation. The safeties are going to cover the deep halves of the field while the Mike linebacker drops back into the middle of the field, but not carrying all the way up the seam as he would in a Tampa 2. 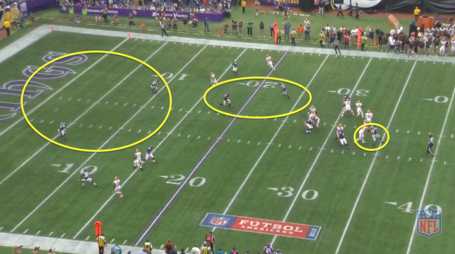 The Cover 2 unfolds as intended, with the slot defender carrying his receiver up the field into safety help, with the linebackers (one of which bit hard on a play-fake and is hustling to get back to his landmark) patrolling the middle of the field.

The Browns have acres of space to operate underneath on this play, and you can see that nearly every defender is at the sticks or beyond. But that's what defensive coaches who operate under the Dungy/Kiffin model do. They bend, but they don't break.

(At least, that's the intention.)

This play proved to be a success in that regard, as pressure on the quarterback is going to force movement and notallow for any breakdowns down the field. And the nature of the Cover 2 leaves defenders in place to handle a scrambling quarterback, as we see in the final image. 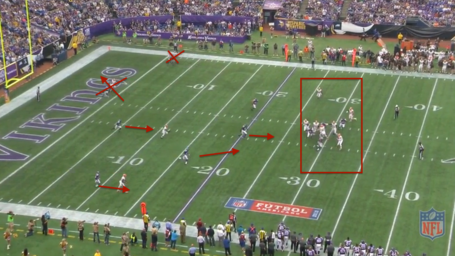 The two deep receivers on the right side of the offensive formation are well-covered and out of the play, yet the pressure from the Vikings has forced Brian Hoyer out to his left.

That's fine from the Vikings' perspective, because the middle linebacker is facing the line of scrimmage and has Hoyer in his sights, while the zone corners on that side of the field have their eyes on the quarterback and are within striking distance of his targets.

Hoyer would roll out and throw and incomplete pass, setting up third-and-long. The Browns could have easily ran routes to exploit the soft underbelly of the coverage, but they went for a home run, which plays perfectly into Frazier's scheme.

Adapting to the Personnel

And like Lovie Smith, Leslie Frazier succeeds as a defensive coach by adapting to his personnel.

"Given how slow-footed the MLBs ended up being in Minnesota, there was a lot less of the "classic" Tampa-2 base coverage call, though everything was philosophically similar," Hasan said, and when I put on the tape of the Vikings in 2013, I could see exactly what he meant.

On the very first play from scrimmage on defense in 2013, the Mike linebacker for the Vikings attempted to flip his hips and backpedal down the seam, only to stumble and nearly fall over his own feet.

So Frazier didn't ask his slow-footed Mike backer to carry the seam, and instead used other Cover 2 looks that were more within his capabilities.

His ability to adapt, along with an open-office policy and a respectful atmosphere where players can discuss his systems and schemes set Frazier apart. Hasan mentioned that Gerald McCoy specifically should enjoy playing under Frazier, as his frustrations from a year ago of being misused in the Greg Schiano defense shouldn't return with Frazier running the show.

So Frazier, like Smith, gets his players to buy in to his scheme, and earns their respect and effort with the way he carries himself. This, more than any scheme-related analysis, will be the biggest change in Tampa as compared to the 2013 Bucs.

The Greg Schiano defense seemed to feature rigid, static roles with repetitive stunts and blitzes that didn't flatter the personnel or confuse many opponents.

And the postseason comments from players who were thrilled to play under a coach like Lovie Smith and took parting shots at the ways they were used under Greg Schiano reveal that the players weren't buying what the former Rutgers' coach was selling.

So even if Frazier's preference to run a more conservative, less multiple defense than Lovie Smith loses out to his new bosses' ideals for what a Buccaneer defense should look like, he still brings a wealth of experience in a similar scheme.

And more importantly, he brings a respectable demeanor and an ability to adjust and adapt that will suit his talented-but-so-far-misused players.

So the X's and O's on the chalkboard may be Lovie Smith's, but the installation of the defense and gameplan with the players will be up to Frazier. And based on his history, that's a role he'll thrive in for the Buccaneers.