Buccaneers' starters look like third-best in the NFC South

It's not looking as good for the Tampa Bay Buccaneers' starters as I would have thought. At least, according to Pro Football Focus.

The people at Pro Football Focus love evaluating depth charts. And they do a pretty good job of it. I have some issues with their general methods, but they're probably the best, objective source for quick, surface-level player quality analysis. They also have this handy place where you can compare all NFC South depth charts as they view them.

So I took their data, and I made a chart because charts are awesome. Here, look at it: 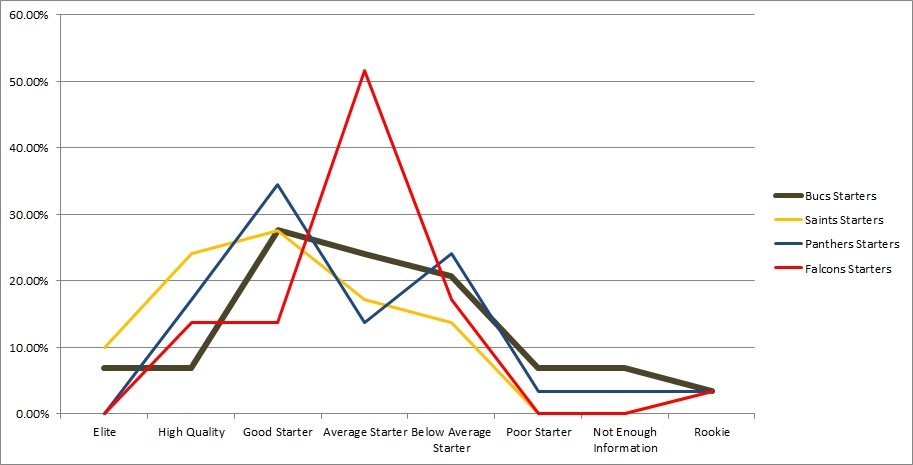 I find the general shape of these things kind of interesting. You can see that the Falcons have a really mediocre roster: heavily weighted toward average starters and quickly dropping off elsewhere. The Panthers have a weird, unbalanced group of starters with many good and high quality players, but also many below-average starters. The Saints, meanwhile, are really good: they have the most elite and the most high-quality starters, combined with the fewest starters in the below-average categories.

The Bucs are fairly balanced, but it leaves them wanting. We can make it look a little better by replacing Akeem Spence (poor starter) with Clinton McDonald (good starter) and Adrian Clayborn (poor starter) with William Gholston (average starter), but they'd still have the third-worst roster in the NFC South, well behind the New Orleans Saints and just behind the Carolina Panthers. And that's including Carl Nicks as starter!

There are a few redeeming factors: they have more "not enough information" players than the other teams, and both poor starters (Adrian Clayborn and Akeem Spence) will either not start, or could easily be replaced.

But it's still not a very encouraging picture. Despite the massive additions all over the roster. Despite the constant insistence that the Bucs want to win this year. Despite all of the optimism surrounding the team. In spite of all those things, the Bucs are still just third in the NFC South by at least one objective, third party's evaluation. Boo.