Josh McCown Versus Game Film: Week 11 versus the Baltimore Ravens

In a game delayed by lightning and slowed down by poor field conditions, Josh McCown showed why he's a capable, but not special, NFL quarterback.

Share All sharing options for: Josh McCown Versus Game Film: Week 11 versus the Baltimore Ravens

Looking at his statistics last season, you might think that Josh McCown was the best quarterback in the NFL. He was efficient, he avoided mistakes, and he made big plays (some in very key situations). He handled pressure well, he showed good mobility, and generally looked like a different player than the one who would leave the NFL for high school coaching and lower league play just a couple of years prior.

But his Week 11 outing against the Baltimore Ravens revealed that McCown isn't some recreated cyborg version of his former self, programmed to make perfect passes. He's not a late-bloomer ready to lead the league in passer rating in his first full season as a starter.

He's just a capable, average NFL quarterback with a bit of flair and creativity. Let's go to the tape and see why.

Josh McCown isn't perfect. In fact, he struggles with a lot of the same issues that Mike Glennon deals with, and the biggest similarity I've seen is inconsistent ball placement.

There's a difference in "accuracy" and "ball placement." Accuracy is a catch-all term for "can you throw it where a receiver can catch it?" while ball placement focuses on the finer points of fading to a particular side of a receiver or hitting a target in stride rather than making him stop his progress to catch the ball.

Against the Ravens (in poor conditions, if you're into excuses), McCown showed a lack of both at times.

In the first quarter, before the game was stopped due to inclement weather, McCown blatantly missed on three throws to three different receivers. There was no rhyme or reason for the missed throws. They just weren't on target.

That will happen with average quarterbacks.

His accuracy would improve as the game went on, but there would still be moments where McCown reminded everyone why he was on the verge of retirement not that long ago. 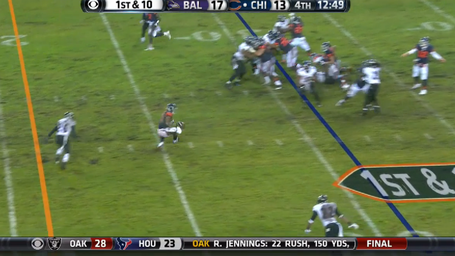 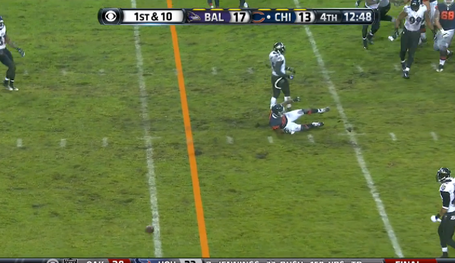 McCown would finish with 12 incompletions, and by my count, at least five of them were entirely his fault. Throws that were off-target with no chance of being caught, or throws that were so poorly placed that the receiver can't be blamed for not holding on.

But, McCown did show some positive things that are worth mentioning.

One of the biggest differences between Josh McCown and Mike Glennon is ability to handle pressure. Glennon proved last season that he struggles mightily when blitzed or rushed, while McCown showed that he thrives in that situation.

With a minute left in the first half, the Bears set out on a drive to try to put points on the board before heading to the locker room. This meant no sacks and no negative plays. 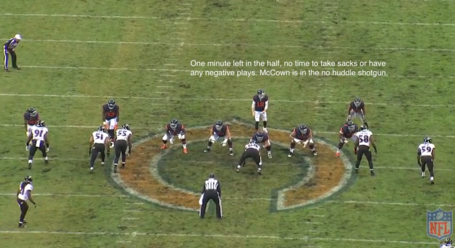 The Bears were in the shotgun, no-huddle offense starting around midfield, and the veteran QB was incredibly aware of his situation and the circumstances of the drive. 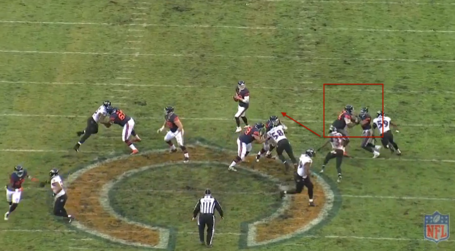 With a blitzer coming free (and his blockers getting in each others way...) 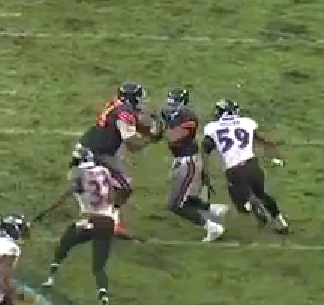 McCown kept his eyes downfield while remaining aware of the pressure. 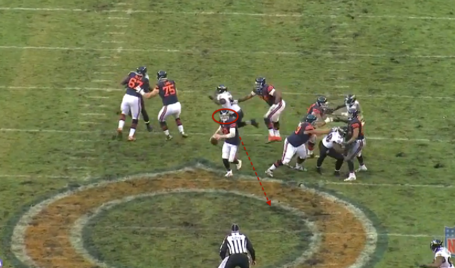 He didn't step backwards away from the pressure, but stepped up in the pocket, keeping the hopes of a positive play alive.  He would find a cutting Brandon Marshall for a nice gain, and hurry his offense back up to the line of scrimmage. 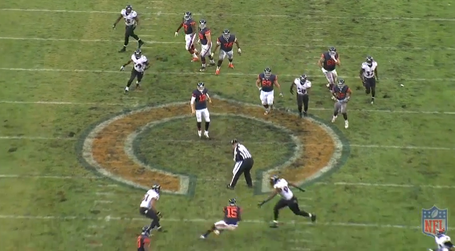 I know it's difficult to generalize in situations like these, but I believe it's more than fair to say that Mike Glennon would not have handled this situation in a similar fashion. Glennon had a tendency to drop his eyes and try to escape from the back of the pocket in 2013, rather than stepping up and navigating the maze of blockers and rushers to keep his eyes downfield.

Later on in the same drive, McCown showed a bit of creativity to help save a timeout and keep the drive going. 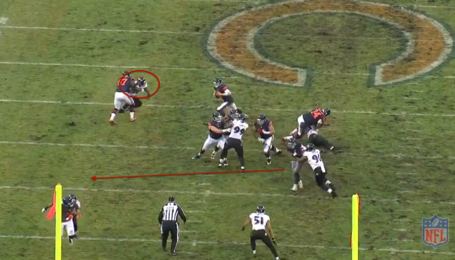 Knowing that he has a late-releasing Matt Forte matched up on slower defenders, McCown escapes pressure from both edges by stepping up and out of the pocket parallel to his safety valve receiver. 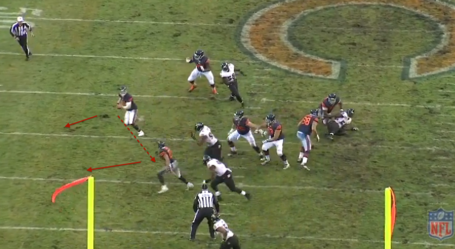 Both quarterback and running back are outrunning defenders as they move toward the sideline, and McCown waits just long enough for Forte to get good separation from the pursuing Ravens. 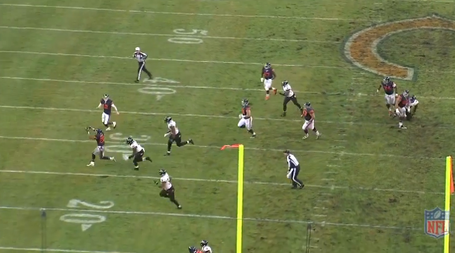 Once McCown feels comfortable that Forte is clear of his defender, he places the ball out in front of his back and allows him to run at full speed to make the reception. The perfect ball placement allows for Forte to get upfield and out of bounds, keeping the drive alive deep in field goal range.

Not Just The Receivers

Critics of McCown will be quick to mention his trio of tall, athletic receivers (Brandon Marshall, Alshon Jeffery and Martellus Bennett) as the reason for his success.

And while it doesn't hurt to have three of the biggest catching radii in the NFL to throw to, McCown certainly did his part. 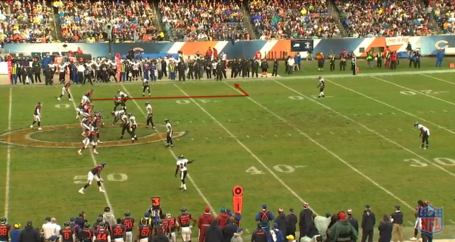 On this play, McCown faces no pressure at all, and is able to make his reads and show good anticipation on a deep out route to Brandon Marshall. 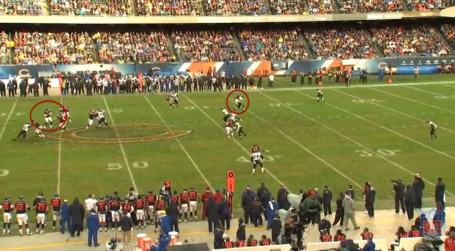 At the time of McCown's windup and throw, Marshall is just getting into his not-very-sharp break (to be fair, the turf conditions were quite poor). 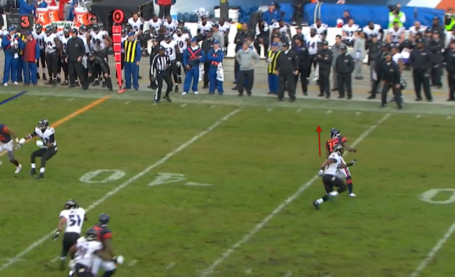 Marshall has room to his outside, and that's exactly where McCown puts it, using his receiver's outside leverage and keeping the ball in an "only my guy can get it' area. 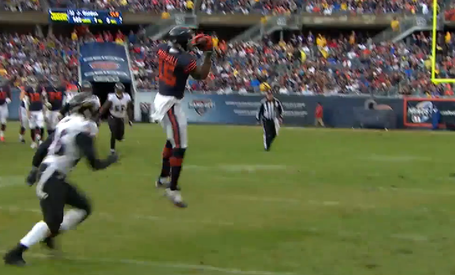 Marshall leaps to grab it, and the Bears secure a first down. But this is a play that Mike Williams or Kevin Ogletree could have made, in addition to McCown's 2014 targets in Tampa.

Knowing When to Take A Chance

McCown wouldn't have a ton of chances to push the ball down the field, as the Bears tried to keep the game conservative considering the field conditions, but on the first offensive possession of overtime, the veteran would find a mismatch he couldn't resist and stretch the field for a crucial play to get into field goal range.

Seeing Martellus Bennett attacking the seam against Lardarius Webb, who stand a half of a foot shorter than the Bears' tight end, McCown put up a jump ball that would give Bennett a chance against Webb, and wouldn't allow a safety to get involved in the play at all. 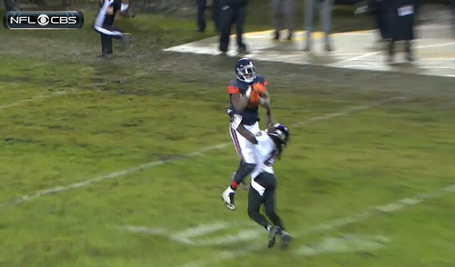 McCown took advantage of the mismatch, relying on Bennett to make a play against a smaller defender in poor position, and the result was a huge gain for the Bears.

So in this instance, McCown did use the size of his receiver to his advantage. But he did so in a smart way. The field was a swamp, and the mismatch was brutal. It was the perfect time to play it safe and rely on his big tight end to go up and get it, rather than trying to lead him further down the seam and possibly allow a safety to get involved.

Against the Baltimore Ravens, Josh McCown looked average. He looked normal. But late in the first half, and in overtime, he made the right decisions and avoided mistakes, and that boosted his team to a victory.

This is the sort of game McCown was signed by Tampa to produce. Sure, his multi-touchdown breakout games last season are alluring, but if that was his expectation, he'd have signed for Joe Flacco money. But he was paid as a premium backup or low-end starter, and he earned that paycheck in a slightly sloppy but generally acceptable victory against the Ravens, complete with a couple of moments of brilliance.