The Tampa Bay Buccaneers have had a manager of analytics since March in Tyler Oberly, but we had little idea of what he'd been doing. Until now, as Oberly presented his work at the MIT Sloan Sports Conference before being hired by the Buccaneers, and that presentation is now available online.

Share All sharing options for: Buccaneers manager of analytics discusses his system

The traditional problem with NFL analytics is that everything's highly entangled. The question of how good a team or even a certain unit is at doing certain things has been cracked fairly well by the likes of Football Outsiders, but they're a long way from being able to apply those measures those to specific players. At this point, the statistics produced are too dependent on context to be of much use at most positions -- this is not baseball, (un)fortunately.

Tampa Bay Buccaneers manager of analytics Tyler Oberly thinks he's cracked that case with his Elitics Model based on PER. Or at least he thinks he's made his statistics useful enough to be used as part of a decision-making process for an NFL team. The most important aspect of his analysis appears to be cross-position analysis, specifically in terms of value to teams. Pro Football Focus manages to grade players, but grades are not well-suited for cross-position analysis, and certainly not easily translated into a value number -- what would you pay for each player? 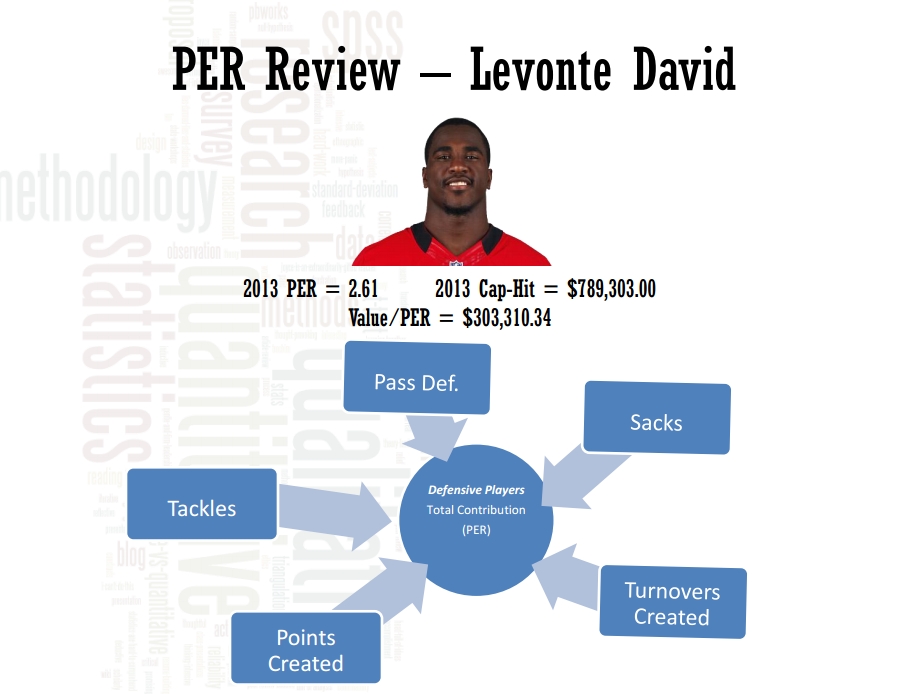 Getting Lavonte David's name wrong a week before being hired by the Bucs is pretty ironic, though. Image from Oberly's slides.

It looks to me like that's what the Buccaneers are getting out of Oberly: which players are under- over overvalued, and how can we construct our roster in a more intelligent manner. That would help explain why they've signed players who excelled statistically last year, but seemed to be valued below that production: Josh McCown, Brandon Myers, Anthony Collins, Alterraun Verner and Michael Johnson all fit this description. McCown was even explicitly identified as a top 10 quarterback last year, even when accounting for the small sample size.

None of this means that the Buccaneers used Oberly's research as a deciding factor, though, and most indications are that it was mostly used as just one part of a bigger picture. Which is probably the right way to use analytics at this point.

"We both feel that analytics help us, guide us and give us some - raise some questions that help us evaluate the player a little bit better," Jason Licht said after the draft. "You might be looking at particular position and the analytics don't support taking him at that position and it makes you just - you want to make sure that you're making the right decision. It's a great guide, we use it all the time."

Oberly's presentation slides are also interesting, because they feature a lot more details and data -- and one pretty picture on roster quality and depth across the NFL. 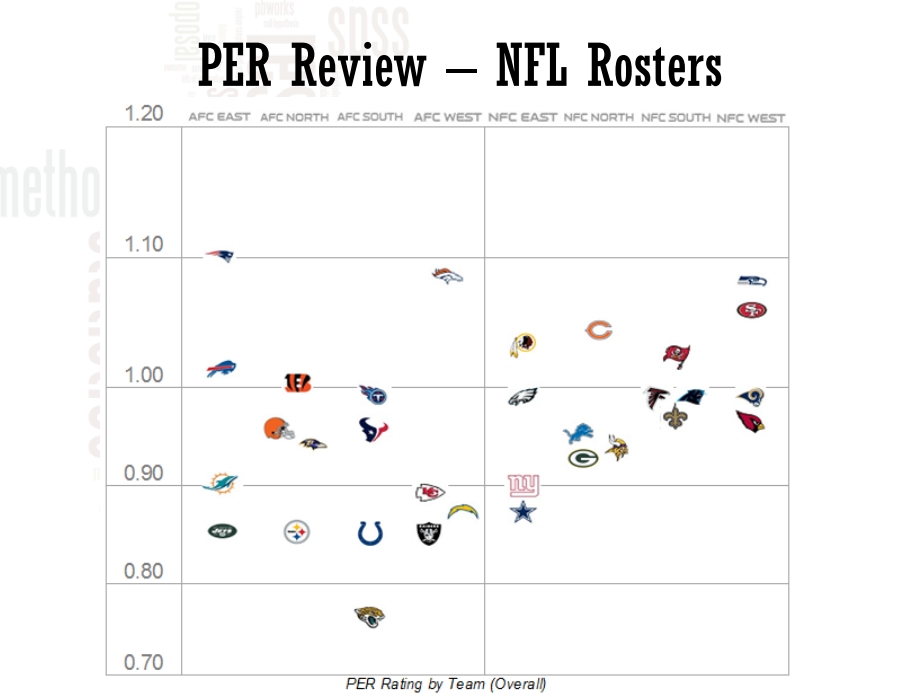 By that graph, the Bucs had the seventh-best roster in the NFL last year.

The work Oberly presented at the MIT Sloan conference isn't the only work he's done, though, and one article he wrote ahead of the 2013 NFL Draft is of particular interest: it tried to identify a few trends in the draft, both in terms of which players are likely to be drafted, and how they're likely to do once they're drafted.

Of course, the fact that this was a part of Oberly's research doesn't mean that the Tampa Bay Buccaneers actually used any of it. But it's interesting to note it nonetheless.

In the end, I'm not entirely convinced that much of what Oberly's doing is useful as a predictive tool rather than just being retrospective, but I'd have to see much more of the details to really get a good idea. And those details are not going to be forthcoming, because it's a proprietary model, and he's now a member of the Tampa Bay Buccaneers. Still, it's cool to get a quick view at what the Bucs' manager of analytics is doing.