The Tampa Bay Buccaneers have added a new playmaker to their offense in Texas A&M receiver Mike Evans. So what does the tape say about the newest Buc?

"Show me a gracious loser, and I'll show you a failure." - Knute Rockne

The playing style and attitude of new Tampa Bay Buccaneer Mike Evans can be summed up in this quote from the famous Notre Dame player and coach. Evans doesn't have every trait you'd like in a receiver, but he makes up for his shortcomings with a passionate approach to the game and a bulldog temperament on the field.

Here's what another look at the tape has to say about Evans.

What He Does Well 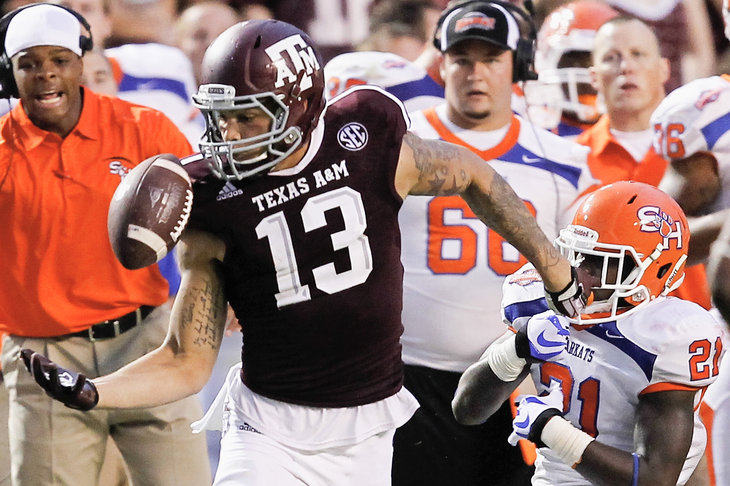 Mike Evans never lets his size and strength go to waste at the receiver position. When presented with a chance to get his hands on a defender to block or gain separation, he does so emphatically. Against LSU in 2013, his defender was grabbing and holding him all afternoon, but Evans would subtly shove back and get open despite the tight coverage.

There's a risk for offensive pass interference here, to be sure, but Evans seems to be able to do all his work without fully extending his arms, something that referees tend to look for when throwing flags against the offense.

But don't let his size fool you. Evans is fast. Very fast. Using the Speed Score metric, which puts an athlete's (usually running backs) weight up against his 40 time to consider how well he moves and how tough he is to tackle and catch in the open field, Evans scores similarly to Doug Martin. If Martin is the Muscle Hamster, Evans is the Muscle Bulldog.

Evans has the speed to pull away from a defender in just a stride or two once he makes his move, and he doesn't get caught from behind once he gets past a defense. Even if a defender gets close to him in pursuit, it's still a tough task to bring down the well-balanced Evans.

But what if he's not wide open? What if he's playing against a DB who can stay in his hip pocket all game? Evans is still open. He has incredible reach, hands, body control and leaping ability to be open on literally any play. He's the prototype of the receiver you want to throw the back shoulder sideline pass to, and he's capable of boxing out his defender and getting good position on comebacks and inward-cutting routes to provide a big target for his quarterback.

Evans doesn't care if he's in a crowd of four defenders or catching the ball on a screen, either. His ability to haul in the pass is the same in either scenario.

He's a fighter and a full effort guy on the field, and it shows in the way he plays. He's never going to back down from a fight, and he's not going to be happy with anything less than success.

Where He Can Improve

And for all of Evans' athletic abilities, he's not an explosive athlete. It takes him a stride or two to get going in most cases, which will limit his ability to break away from a nearby defender in some situations. Still, with his size and body control, this isn't going to prevent him from getting open.

Evans will ultimately be limited by his athletic profile, which is similar to that of Vincent Jackson. He can work on being more explosive and may harness his speed and be a quicker, better leaping version of the Bucs' veteran wideout. But he's unlikely to ever be Calvin Johnson or Randy Moss, as he's just not that caliber of athlete.

How He Fits the Buccaneers

Jeff Tedford is all about speed in space, and despite claims that he's not fast, Evans brings more than enough speed in space for his new offensive coordinator.

Evans is a threat to break away for a big score from anywhere on the field, as he's fast enough to pull away from defenders who have no chance of dragging down his big frame at full sprint in the open field. He can and will be used in the screen game, because once he gets going north and south, he's a very tough player to bring down.

Evans is also the right kind of player for both Josh McCown and Mike Glennon to throw to. Like Vincent Jackson, Evans' size, wingspan and hands erase some of the accuracy issues both throwers have. Johnny Manziel is not an incredibly accurate quarterback, and Evans certainly did his fair share of work to make the dynamic signal caller look good at A&M.

The former Aggie receiver also does a great job of getting open after his initial route ends, something that will help him in the pros on broken plays that are extended due to Josh McCown's ability to scramble.

Mike Evans isn't going to end his career as the best receiver in the history of the NFL, but he projects to play quite a lot like Vincent Jackson, who has been criminally underrated for years and presents matchup nightmares for his opponents. The Buccaneers didn't hit a home run with this pick, but they made good contact, and given the other options on the board, that's definitely not a bad thing.