Everyone thinks the Tampa Bay Buccaneers will draft a Texas A&M player. The question is just which one.

The 2014 NFL draft starts tomorrow, which means everyone should have a good idea of what the teams are going to do. Or at least, they should have as good of an idea as they can possibly have -- which may not be all that good, after all. Which is why we took a look at 29 different mock drafts from across the internet to see what the consensus on Tampa Bay's pick were.

The results shouldn't surprise anyone: out of 29 mock drafts, Mike Evans appeared in 16, while Johnny Manziel appeared in 5. Blake Bortles was the choice in 3 mock drafts, and the rest was a collection of odd-ball picks -- with one Sammy Watkins thrown in for good measure, in the only mock draft where he fell to the Bucs' first pick. 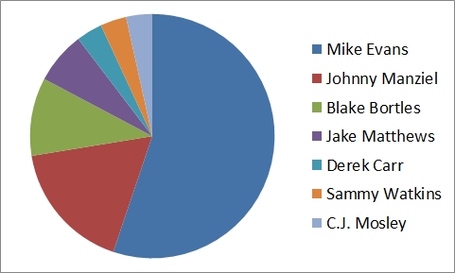 That's a pretty striking visualization: people are utterly convinced the Bucs will add an offensive players, and almost certainly Mike Evans, or a quarterback. Amusingly, no other receiver even appears in any of these mock drafts, despite the fact that Odell Beckham Jr. might be a better fit for the team's offense.

It's also significant evidence of group think (and/or logical deduction). Sometimes, that points to genuine reality, as it did in 2010 and 2013, when the Bucs were heavily linked to Gerald McCoy and Johnthan Banks respectively. Sometimes, though, group think misses the mark, as it did in 2012. The Bucs were commonly linked to Trent Richardson and Morris Claiborne, but instead picked Mark Barron -- a player who they were never matched with.