If you have fallen in love with Sammy Watkins, but are afraid he won't be there at pick 7, don't fear. There is an alternative...

If you ask the average Buccaneer fan who he wants in the 2014 NFL Draft, he'll likely respond with one of two answers: Johnny Manziel or Sammy Watkins.

It's no surprise that Tampa Bay fans want exciting players on offense just months removed from watching their team finish dead last in the NFL in total offense. And while Manziel and Watkins both represent very exciting talents, they both have their own set of question marks, and are unlikely to be available for the Bucs at pick 7 in the draft.

And while the Buccaneers can get by without drafting a quarterback this offseason, they have backed themselves into a corner and must take a wide receiver in the upcoming draft. So if Watkins is gone, and the Buccaneers want to add some "speed in space" in the first 50 picks of the draft, they should turn their attention to Vanderbilt product Jordan Matthews.

What He Does Well

Just for fun, let's compare some basic information for Watkins and Matthews: 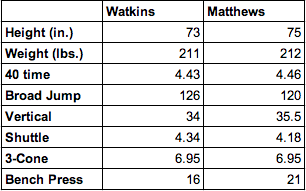 Not a whole lot of difference between the two, is there?

And while Watkins is seen as a once-in-a-decade prospect at wideout with a hype train comparing him to A.J. Green, Julio Jones, and even Randy Moss, Matthews is a borderline first round pick that some analysts have even mentioned as a possible third round selection.

So when I turn to the tape to see where Matthews comes up short, I instead see a polished, productive receiver that stands out as the best player on the field when Vanderbilt is on offense.

Matthews is a very polished route runner, and knows how, and when, to get open. He ran lots of slants and posts at Vandy, and he always seemed to break them at the right moment, cutting at a sharp angle toward the middle of the field and catching the ball in stride.

He had some really average to poor quarterback play during his time with the Commodores, so the fact that he was so productive (just under 3800 career yards with 24 touchdowns) is a credit to his ability to get and stay open, and make catches away from his body.

Matthews has enormous hands (almost an inch and a half bigger than Davante Adams, who I profiled earlier) and he puts them to good use, making catches away from his body and showing the ability to make the spectacular catch, or a tough catch in traffic.

And when given breathing room, Matthews has the speed to break away from defenders and take the ball to the house. He featured prominently in his offense in the same way as Watkins, catching a lot of screens and receiving most of the attention from his quarterback. And just like Watkins, he made his share of highlight plays on screens and quick routes designed to get him the ball as soon as possible after the snap.

Where He Can Improve

It's not all positive for Matthews, however. Remember those huge hands I mentioned?

Sometimes they do that thing Vincent Jackson's hands do. Despite being his hands being huge, strong, and capable, Matthews will simply let the ball hit the turf (or a defender's hands) far too often. His drop problem almost certainly has to be concentration based, as he has the technique and hand size to avoid drops for any other reason.

And despite all of those great measurables I listed for Matthews, he doesn't quite play as quick on the field as he performs in shorts at the Combine. He is quick in short areas, but he seems to just have one gear. He doesn't chop-step and blow by defenders, but instead seems to slowly speed away from them on longer routes. This is odd, considering he measures well in both speed and explosion measurements, but the tape doesn't lie.

Matthews also could stand to bulk up a bit, as he's a bit thin for his height. He didn't have too many issues getting manned up at the line in college, but that could become an issue in the pros against bigger, stronger defensive backs. If beating Darrelle Revis or Richard Sherman in press coverage is a prerequisite for a receiver in your book, then Matthews probably isn't the guy for you.

How He Fits the Buccaneers

Jeff Tedford wants to get "speed in space." You've heard it so many times now that it probably makes your ears bleed. But Matthews is a guy who presents defenses with problems when he's on the field because of his speed.

He's a threat to score any time he has the ball in his hands, and that's something Tedford would accentuate to keep a defense off balance. And he's not just a screen-game guy, as he can take it to the house on slants and posts, too.

This would be a welcome addition to an offense featuring reliable but slow targets in Vincent Jackson and Tim Wright. Matthews isn't going to be confused for Percy Harvin or Marquise Goodwin in terms of speed or quickness, but he's certainly a home-run hitter at the receiver position.

Can be effective from any spot on the field. Able to find openings due to his exceptional route-running, even when faced with physical cornerbacks at the line. Adjusts well to the ball downfield and gets his body in position for the catch. Should be better after the catch than he really had the opportunity to be in Vanderbilt’s offense; the 4.46 speed is no fluke. Had no issues handling the No. 1 receiver role against SEC competition, with the aforementioned shaky QB play. Good height, strength and leaping ability, all factors that should allow him to do some damage in the red zone. Solid hands.

A big, strong target with an athletic 6-3, 212-pound frame, Matthews is the type of wide receiver who is all the rage in the NFL these days.  Incredibly strong, his 21 reps were the second most for a receiver at the Combine. While not a blazer, he had decent enough speed to separate from coverage.  A deft route runner, the Commodore is also a sure-handed target who fights hard for the ball in the air.  In fact, his willingness to sacrifice his body in order to make the reception has endeared him to coaches and teammates alike.

Overall, Mathews is a very skillful receiver who has the talent and smarts to start as a rookie for most NFL clubs. While he doesn’t have the top end speed to be a consistent deep threat at the NFL level, Matthews will be very productive as a short and medium range receiver. The player he reminds me of is Reggie Wayne of the Indianapolis Colts. They are similar type athletes, but Matthews is a little bigger than Wayne. Where Matthews gets drafted will most likely be determined by how fast he runs. Wide receiver is a stop watch-driven position and the faster guys have a way of getting drafted higher. Still, I think the worst-case scenario for Matthews is that he gets taken in the second round.