William Gholston is one of the players who has the potential to break out this season -- but there's a big difference between potential and production.

Share All sharing options for: William Gholston, future star for the Buccaneers?

The William Gholston hype is reaching boiling point. To many Tampa Bay Buccaneers fans, he's the man who will have to stand up and energize the pass rush opposite Michael Johnson. The second-year player certainly flashed some ability last year, and has the size and especially length to be a quality defensive end down the line. And former Chicago Bears personnel executive Greg Gabriel is guessing that he'll break out next season.

I'll admit, I'm guessing here, but in Lovie Smith's defense, Gholston has the physical traits to be a star.
Gholston has always looked, but never played, the part. He is tall with long arms, athletic, and has a burst. His play at Michigan State and his first year in Tampa has been up and down. He has flashed but hasn't put it all together.

Gholston has certainly flashed potential, and he did show some improvement throughout the season last year, but he was hardly a relevant threat as a pass rusher. I went through his snaps as a pass rusher from Week 11 through Week 17 last year, and he simply didn't do all that much. 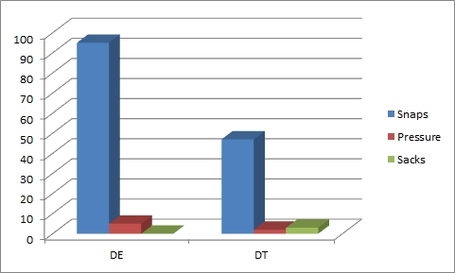 That's not to say that he can't learn to do those things, but right now, he hasn't displayed the ability to be a disruptive pass rusher. He lost his balance too often, didn't use his hands consistently (a pretty consistent issue along the defensive line last year), and too often ended up kind of pushing into an offensive lineman and not getting much movement. He was slightly more productive at defensive tackle, but that looked more like coincidence than a question of skill.

There's no denying that Gholston has talent, and he certainly looked like he played hard in 2013, but there's a huge difference between potential and production. Adrian Clayborn has potential, as do Da'Quan Bowers and Steven Means. One of those guys is likely to turn that potential into talent, but whether that will be Gholston? It's too early for me to say that.

One other tidbit Greg Gabriel shared with his readers should make Buccaneers fans feel a little better, though.

Joe Cullen is one of the best defensive line coaches in the business and is the perfect coach to help Gholston reach his potential.

That's high praise from someone who worked with Rod Marinelli (for a coach who worked under Marinelli). Cullen's history of producing top-notch pass rushers is more or less non-existent, but he hasn't often worked with very talented players, either. Early reviews out of training camps have all been positive, and he has the help of Mike Phair and Stephen White. Hopefully those three can turn some of the massive potential on the defensive line into actual production.