Josh McCown had a very impressive showing coming off the bench against the Redskins in Week 7 last year, a performance that should have filled Bucs fans with confidence for what our new QB could achieve. With a full two weeks to prepare before his first game as the Bears' starter, how did Josh McCown fair in his next outing for Chicago?

Share All sharing options for: Josh McCown vs Game Film: Week 9 vs Packers

Well, it's been a while since I wrote the first edition of Josh McCown vs. Game Film, thanks to the draft and numerous other things - but now that the Bucs are fully into OTAs and finding out just what exactly they have in Josh McCown, it's timely that we do the same. Obviously, from outside One Buc Place, we can't tell how quickly McCown is gelling with the Dunkaneers skillset, or how comfortable he is communicating protection calls to and from Evan Dietrich-Smith, or how well he's nailed down Jeff Tedford's offense. What we can do, however, is use last year's game film to see what he can and can't do.

After nearly beating the Redskins coming off the bench in a high-scoring shootout, Josh McCown was handed the reins of the offense while Jay Cutler healed up from a groin injury. McCown had some luck on his side, as the team had its' byeweek after the Washington game. I found McCown impressive in his first run out in 2013, so with two weeks to get practice reps with the starters, I was excited to see what McCown could do in his next game, a Monday night showdown against fierce rivals Green Bay - a game that ultimately became a "battle of the back ups" after Seneca Wallace replaced an injured Aaron Rodgers in the first quarter.

I couldn't help but be disappointed in McCown's performance.

I'll go through some plays that show some specific examples of where I felt McCown's showing was really lacking, but first, as always, here's the throw-by-throw breakdown of every one of McCown's dropbacks:

So, all in all a regressive performance, marked by ill-placed balls that negated YAC opportunities, or long floaty passes that put his receivers in bad situations - sprinkled in with some bad decision making too. Here's some plays that in particular display some of McCown's more worrying tendencies from the game:

A) How not to adapt

The Bears line up in a single-back set, in a trips-left look, with Alshon Jeffery in the slot and Martellus Bennett at tight end. Pre-snap, Jeffery recognizes that Tramon Williams, who is lined up across from him, is going to be blitzing, and signals to McCown to throw a quick smoke route. 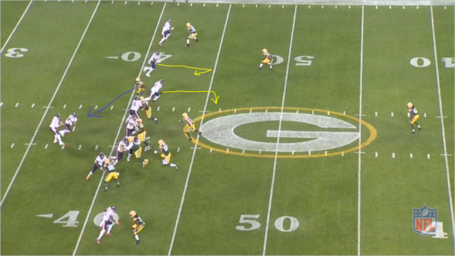 I've highlighted Jeffery's quick curl, and where Williams is blitzing - McCown is faking a handoff to Forte, but he would clearly be able to see Williams coming at him. Notice too how A.J. Hawk is coming forward, due to the play-action. You'll also see I've drawn Bennett's route, a short dig. 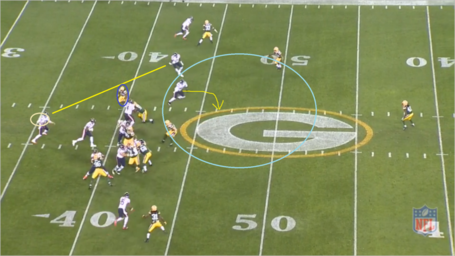 Now, as you can see Williams (circled in dark blue) is in the line of sight between McCown and Jeffery. McCown can see this as his arm is cocking back (in beige). Meanwhile, Bennett's dig route is being run into a huge hole in coverage, thanks to the linebackers biting on the play-action. 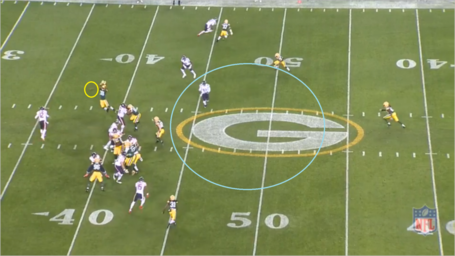 McCown throws the ball to Jeffery, despite seeing Williams in the way of the throw. Williams jumps up and bats the ball down - and McCown is lucky that the play didn't end in a pick. Now look at Bennett, who is still wide open. Jeffery alerted McCown to Williams' blitz pre-snap, and they adjusted to a smoke route - which is what you'd hope they would do in that situation. Still, McCown has to recognize that the trajectory of Williams' blitz meant he was in perfect position to make a play on the ball, and adjust. From the design of the play, it's clear that the play, as called in the huddle, was designed to suck the linebackers in and open up that zone for Bennett. When McCown saw Williams, he should have still been thinking "the play-action should open up Bennett", and adjusted to what he saw in front of him. Heck, if he was determined to go to Jeffery, even pump-faking would have frozen Williams - or forced him to jump for the bat-down too early - and opened up Jeffery again. The most frustrating thing is seeing how wide-open Bennett was - if McCown hits Bennett in stride, all Bennett needs to do is run fast enough to put the high safety at a shallow angle and turned the corner and this play's going for six. Instead, McCown's failure to adapt could have led the play to go for six - in the opposite direction

Last time I looked at McCown's game film, I praised him for the regularity with which he would hit receivers in full stride, due to the accuracy of his ball placement.

In the very next game, McCown's performance was riddled with poor ball placement, that either reduced how much yardage could be made after the catch - if not killing off YAC opportunities all together. It's confusing, and frustrating, that something McCown did so well in the previous game, he failed to do so regularly in this game. On the following play, Brandon Marshall makes 8 yards after the catch - but it should have been more. Further, this was the only catch all game where Marshall was able to make YAC. 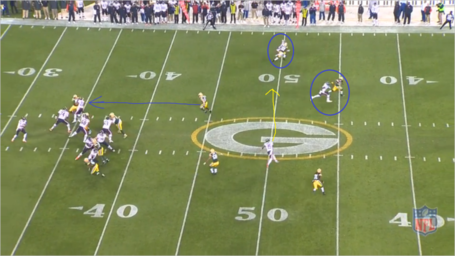 Here you have two receivers, circled in blue, running clear-out routes - deep routes designed to take defenders away from the area of the field you want to attack. Brandon Marshall is running a crossing route across the field; as a linebacker is coming down to cover Matt Forte (blue arrow), it means Marshall will be wide open. 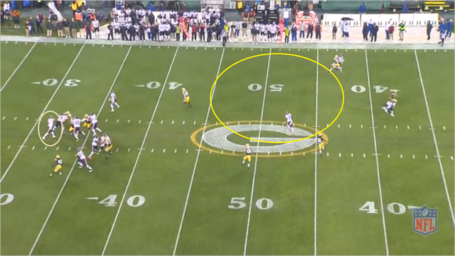 So McCown throws the ball (beige circle) at Marshall, who (as you can see in the yellow circle) has a ton of space around him with no defenders in the area. The defender most likely to get to Marshall is Davon House (wearing #31), but if Marshall is catching this in full stride then House shouldn't be able to catch up to him, giving Marshall plenty of room to turn up field and make YAC. 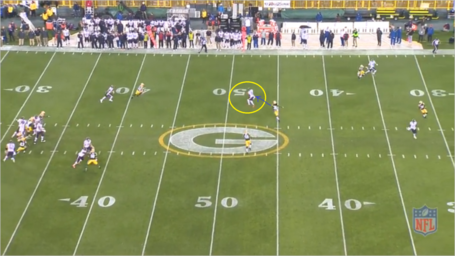 Unfortunately, McCown's ball doesn't hit Marshall in stride - the endzone camera angle is too blurry to be able to show the optimal angle, but you can tell that Marshall has had to turn his shoulder back towards McCown to catch the ball - which means he can't be running full speed. This allows House to close in on him. 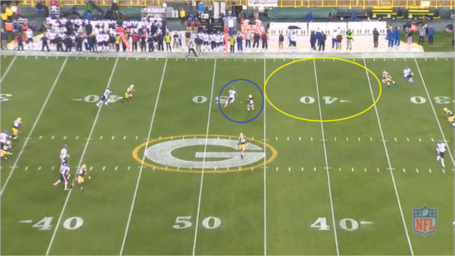 By the time Marshall turns up field, House is in position to force Marshall to have to move diagonally rather than vertically. If Marshall is moving full speed, he would have enough distance from House to be able to use all of the space in the yellow circle to set up the DB at the right of the screen with headfakes and stutter steps, or at the very least use his large frame to run through him for a few added yards after contact. Instead, he has to try and break away from House... 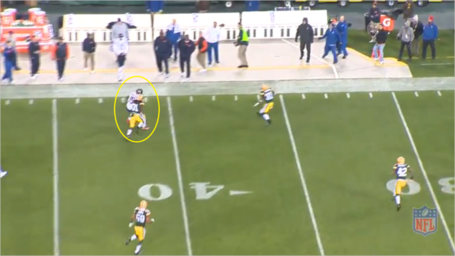 ... which he is unable to do. What seems like a relatively minor problem here - Marshall was still able to make 8 yards after the catch - is something that became more and more of a problem as the game went on, which is why this was the only play where Marshall made YAC.

Unfortunately, McCown's ball placement, which was so praiseworthy against the Redskins, is an issue several times throughout the game - and not just the placement, but the ball delivery as well. It wasn't all bad, though, as McCown showed a few real positives in this game too. Come back for part two for seven further plays that highlights McCown's good and bad play in this game.