Behind the Numbers: New Buccaneers Tackle Anthony Collins' Production as a Pass Blocker Has Been Elite

The Bucs bailed on Donald Penn this offseason, replacing him with unproven Anthony Collins from the Bengals. But what Collins lacks in prolonged experience, he makes up for with some incredible statistics as a pass blocker.

Share All sharing options for: Behind the Numbers: New Buccaneers Tackle Anthony Collins' Production as a Pass Blocker Has Been Elite

One of the biggest concerns for Tampa Bay Buccaneers this offseason was finding a new left tackle to replace Donald Penn, who turned into something resembling a turnstile at times during the 2013 season. The Bucs were heavily linked to a lot of tackles in the lead up to free agency, and ultimately landed Anthony Collins of the Bengals.

However, Collins wasn't the universally regarded hit that adding a top-tier, proven tackle via free agency or the draft would have been, Instead, he's a career backup who has put forth strong showings in limited time as a starter, culminating in a fine 2013 season which earned him his paycheck in Tampa.

But just how good has Collins been? While we can't know for sure what the rigors of a 1100-snap season will do to him, we can at least project out his numbers from previous seasons and see how he performs compared to some of the top tackles in the NFL.

Anthony Collins has not allowed a sack since Week 4 of the 2009 season.

You may remember Week 4 of the 2009 NFL season as that one time when Raheem Morris and the Bucs fell to the equally awful Washington Redskins, led by Josh Johnson at quarterback.

Since that time, the Buccaneers have won 28 games. Anthony Collins has allowed 21 total pressures on his quarterbacks.

And while Collins hasn't been a regular starter over these past few years, he has logged over 1500 snaps since 2009, with 1313 of them coming since the first game of his sack-free streak. So why don't we break down how Collins' pass protecting production compares to some other key figures?

Comparing to the Competition

Here's a chart using PFF's data combined with some math to put the tackles on level playing ground. I'll explain the different sections below. (Click to expand.) 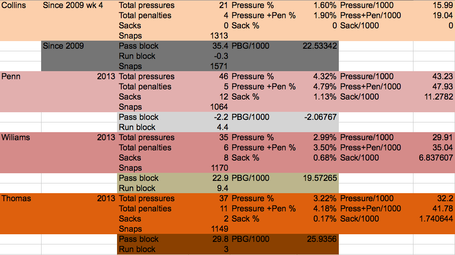 The players listed are Anthony Collins, Donald Penn, Trent Williams of the Redskins, and Joe Thomas of the Browns. Williams is significant as the top-rated tackle of 2013 according to PFF, while Thomas earned the top grade in pass blocking alone.

The total statistics in the first column are self explanatory. Pass block and run block are the pure grades as given by PFF's graders. Total pressures, for those unaware, is the sum of all sacks, hits, and hurries allowed.

The second column features pressure percentage and pressure plus penalty percentage (or in other words, negative play percentage). The final percentage is sack percentage. PBG/1000 is pass block grade per 1000 snaps.

The final column provide more per 1000 snap data. Pressures, "negative plays" and sacks, per 1000 snaps, to provide a level playing field for all three tackles.

Collins dominates every metric on the board here, only falling short of Thomas on a per-play basis as a pass blocker according to PFF's grades. He allows pressures at nearly half the rate of the other tackles, and also avoids penalties unlike any of his fellow linemen.

If you consider just Collins' 2013 numbers, he still comes in below Williams, Thomas and Penn in every area in terms of pressures allowed, as the former Bengal posted 20.8 pressures allowed per 1000 snaps last season, good for 2.08 percent.

Of course, Collins has never played 1000 or more snaps in a season, and we can't be certain how he'll respond to playing a full season at the most stressful spot on an offensive line. This is where these statistics could fall short of indicating what the Buccaneers have in Collins.

But consider that even a 30% decline in his per-play performance still leaves him in very good company, while it would take more than doubling the amount of pressures he allowed to compare to Penn, who was near the middle of the pack according to PFF's grades last season. And considering Collins doesn't cost any more than Penn, the risk is more than worth the potential reward.

So while durability and consistency will remain the questions for Collins, there's no doubt that he possesses some elite production as a pass blocker during his time as a backup with the Bengals. Being able to sustain that level of play over a full season would give the Buccaneers a truly incredible value at left tackle for years to come, but even falling a bit short still means Collins is among the best at keeping his quarterback clean.