Finding a draft-day trade for the Buccaneers

Trade value is a complicated thing, as is finding a draft-day trade.

Share All sharing options for: Finding a draft-day trade for the Buccaneers

So you have the seventh pick overall in the NFL draft and you want to trade down. Do you know the exchange rate? Is there an exchange rate? By the seventh pick, the "can't miss prospect" will be gone and so there goes a lot of leverage to gain a better exchange rate. Thanks to fellow poster, TooFamiliar17, I will share two charts from this research site: How to Value NFL Draft Picks.

Here is a chart develop by head coach Jimmy Johnson of the Dallas Cowboys in the 1980's. 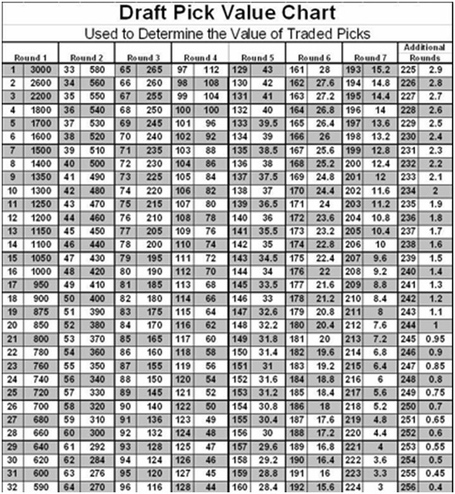 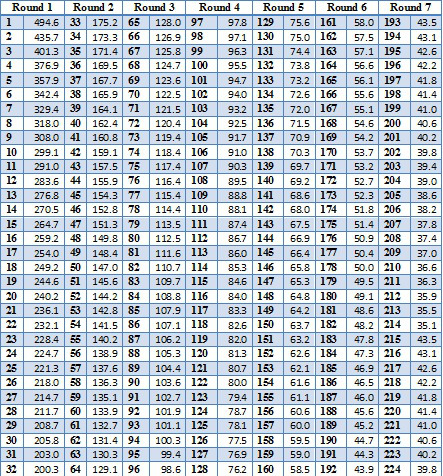 Here is a line graphic to displays both charts as well as the CAV per pick. Red Line is Johnson table. Black Line is Meers table. The fluctuating Blue Line is the CAV at that pick. I would look at the Blue Line instead because it does show a trend and how later picks are more valuable than earlier ones such as early second round picks versus late first round picks. And yet, it is still a guessing game and dependent upon scouts, schemes, and coaching along with the player's determination. 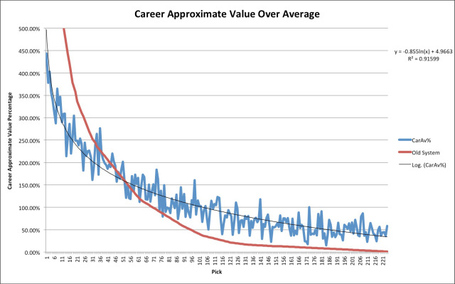 The example provided above reveals a disparity in results. The Jimmy Johnson table favors considerably the owner of the top pick, where it requires all the one year's draft picks as well as one for the following draft. Whereas the Meers table is a meager first and third round pick for the seventh overall draft pick.

Let us compare the two tables, M for Meers and J for Johnson. In transactions 1, M shows we gained good value while J reveals we were losers on the trade. For transaction 2, the Broncos lost value in both tables and both tables show negligible losses. The third transaction has M showing the Texans gained good value while J shows a loss of value. So based upon these results, it looks as though the Meers table is what teams adhere more towards.

Utilizing the Bucs' 2012 trade really is a microscopic sample. I will add two more trades from 2012 draft to get a little more perspective.

Both tables show that Washington overpaid tremendously. Is Robert Griffin the third worth that much? Is that the going price for a potential franchise quarterback? Apparently, this trade is just that extreme.

Within this trade, the Meers table signifies that Minnesota received great value for trading down one spot. But with the Johnson table, this trade was a massive underpayment.

It is safe to say that the trading metric is closer towards the Meers table than the 1980's version of it constructed by Jimmy Johnson. With that now stated, we can use the Meers table as a more credible trading metric. The Tampa Bay Buccaneers own the seventh overall pick. With so many smoke signals, there is a very good possibility we may trade out of the seventh pick and go lower. Get your trading hats on, Bucs Nation, because we want to hear your trade proposals!