Last year Greg Schiano made the mistake of telling season ticket holders that the team was a laughing stock under the previous regime. Head Coach Lovie Smith made no such blunders tonight in a meet and greet at One Buc Palace.

Smith was roundly applauded, spent 20 minutes taking questions from the crowd and then posed for pictures afterward.

The fans of course would ask silly questions like "Who are you targeting in the draft?" to which Lovie got a chuckle from the crowd when he replied, "So let me see if I understand the question - you'd like me to tell you exactly who we're drafting?"

Smith stayed true to his mantra of building a strong defense and his offense being run oriented and Mike Glennon doing well but has things he needs to improve on.

He was asked about Devin Hester and while not giving a direct answer about whether he was interested in the former Bears returner, Smith said, "I've seen every touchdown Devin Hester has scored in the NFL." and went on to compliment him as a dynamic player.

One fan asked, "How will you tool your offense to compete in the high octane NFC South?" The coach reiterated his mantra of a running game on offense but then added, "I'll take our defense against any offense in the division."

Smith also went on to describe the defense as "The one of Warren Sapp. Of Derrick Brooks. Of the Super Bowl champion Bucs of the past."

He was of course asked about Revis, to which he answered, "When people hear Tampa Two they believe we'll be in a cover two shell all the time. That's not what we do. We'll play a lot of Man. A lot of other coverages. When its an obvious passing situation, Cover Two is our primary go to alignment but it won't be that exclusively. We have a need  for all types of good corners and Darrelle is one."

Lovie was asked if after evaluating the tape if the Bucs were better than a 4-12 team. He replied, "Jon Gruden...and I think a few other people have said you are what your record says you are. This was a 4-12 team for a reason. Now, we have some building blocks - some talented players to build around. But no, this team was a 4-12 team and we have work to do."

A fan asked if the Bucs were going to go back to running the ball with power like the Mike Alstott days. Smith was complimentary of Alstott, saying there weren't many out there like him but yes, they were going to run the ball.

Smith also added he wanted speed at every position - even offensive tackle.

Smith wrapped up his Q&A with this: "You have four crucial phases to become relevant in the NFL. First is defense. You have to have a solid defense in the league if you want to compete for championships. Second is special teams, we'll win many games this season with our special teams play. Third is offense, we can have a productive offense with a strong running game and the ability to take shots outside. The final piece is you - the fans. You are really part of the defense. You have to cheer loudly when we're on defense and be as quiet as you can when we're on offense. If you're there, you can make the difference. I know a lot of you have already renewed your season tickets and thats great. We need you. For those of you who haven't yet....get on the train. We're going to make it worth it. We know we haven't been fulling our end on the football field but that will change. "

The Bucs didn't have the new jerseys on display but had a video montage of the pictures already released on the team website. They did have the helmet, I got a good look at it up close. Folks, it's really nice. 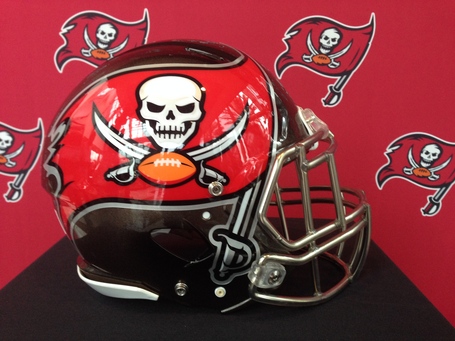 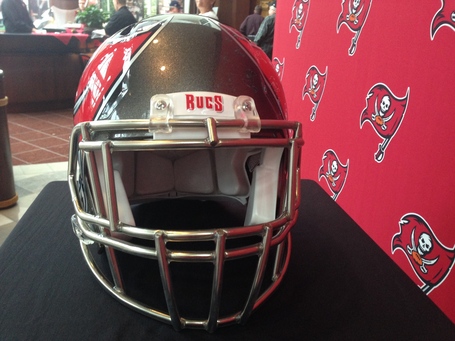 Smith was funny, cordial and down to earth. He shook hands, took pictures and had a lot of happy fans leaving One Buc. Toward the end of the night, the TAMPA....BAY....chant ringed loudly through the front hallways.