Give us your opinion on the Tampa Bay Buccaneers' new uniforms.

The Tampa Bay Buccaneers have released their new uniforms, which you can see below. I've included a picture of the old, red uniforms above to give you a bit of a contrast. So, let us know what you think? Is it better, worse? What do you like and what don't you like? This is what they look like: 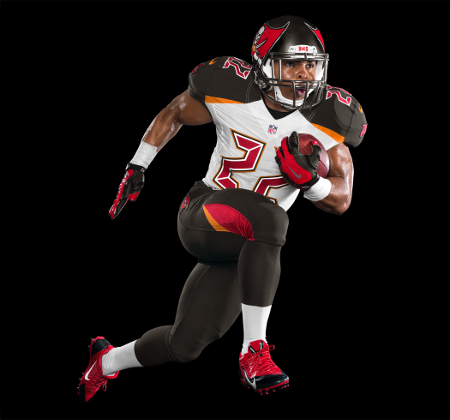 That's actually a darker shade of pewter on the jerseys, not black. The orange highlights are of course a reference to the team's original creamsicle jerseys. The two shoulder pads feature the Bucs' ship logo on one side, and BUCS lettering on the other. The font has been renewed as well, while the overall look of the uniform is completely different.

The Bucs will also unveil a red version of this uniform, but they haven't shown us the pictures of that one, yet.

And vote in the poll, so we can have some data to go with the comments!