Diminutive receiver and return man Eric Page has apparently re-signed with the Bucs on a one-year deal, according to his Instagram account

UPDATE: The Bucs have also offered a one-year contract to the other ERFA, cornerback Deveron Carr, as per Pewter Report. Carr appeared in nine games last year, primarily as a special teamer. As with Page, Carr is likely a camp body who'll have to fight to earn a roster spot.

Wide receiver Eric Page, who was an Exclusive Rights Free Agent for the Bucs, has apparently re-signed for the team. Page broke the news himself by Instagraming a picture of his contract: 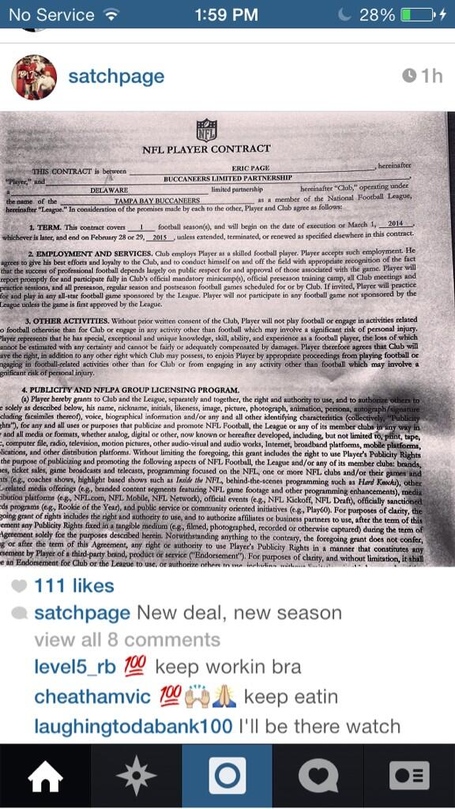 Page mostly contributed to the team last season as a returner, averaging 10.9 yards per punt return and 24.9 yards per kick return. Both stats ranked 13th in the NFL, according to Pro-Football-Reference. As a receiver, Page caught just four passes for 68 yards, while adding 14 yards on two rushes.

Page's new contract is just for one year, so you'd have to imagine that Page will have to earn his roster spot next season, especially if the Bucs do sign Dexter McCluster.