Bruce Allen was apparently the second-worst drafter in the NFL, behind only the amazing Matt Millen. Yep.

Share All sharing options for: The Buccaneers really sucked at drafting, 2004-2008

Did you know the Tampa Bay Buccaneers were really, really bad at drafting under Bruce Allen. Apparently, from 2004 to 2008, they were the second-most hopeless draft team, behind only the Detroit Lions. Yes, zombie Al Davis did better in the draft than Bruce Allen and his actual front office. That's the result of Jon Bois' excellent (and hilarious) look at the 2004-2008 drafts, which includes this amusing/saddening chart. 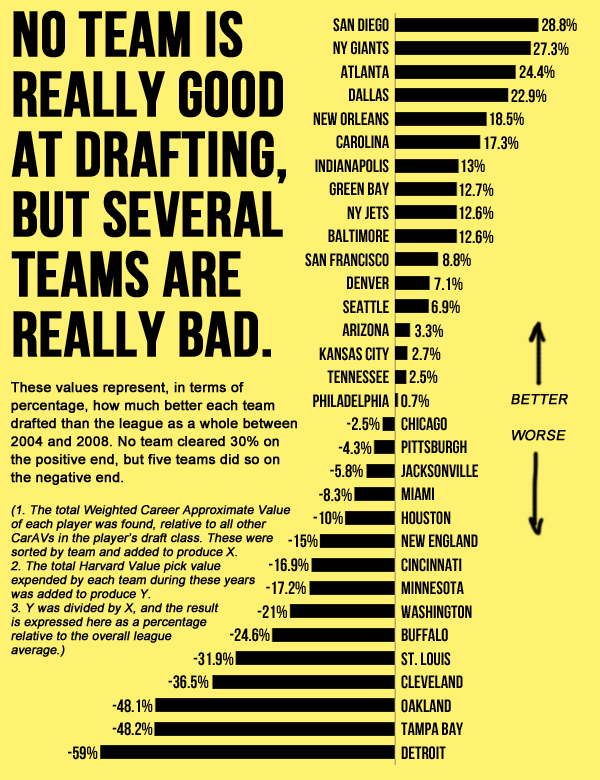 Bruce Allen hasn't gotten much better in Washington, either, truth be told. But then he was always more of a cap and team manager than a personnel evaluator. Hee leaned on Mark Dominik and Dennis Hickey for personnel decisions, the latter mostly handling the draft. And both of those men are now gone, too.

To a large extent, the draft is simply a process involving a lot of random chance in the long run. Some teams simply end up at the wrong end of the curve consistently. This is what happens in random processes: some teams come out looking good while others come out looking bad, while their process is essentially the same. That's the conclusion reached by professor Cade Massey of the Wharton School.

That doesn't make that chart any less ugly, though, and it's a great explanation for why the Buccaneers have been terrible since firing Bruce Allen: the cupboard was bare, and his successors couldn't get it restocked quickly enough. Of the starters on the 2008 Buccaneers, Donald Penn, Davin Joseph and Jeremy Trueblood are the only ones who are still in the NFL (Aqib Talib started just two games that year). It's six years later, but that's pretty abysmal.

The Bucs really had to start over at nearly every position in 2009, except for the offensive line (which didn't play very well, anyway). That makes that 2010 turnaround incredibly impressive -- and the subsequent foibles not very surprising. Building up a quality roster takes time and consistently good drafting, even when you're doing well.

It's also a not-so-surprising testament to Jon Gruden's and Monte Kiffin's abilities as coaches. Gruden managed to get two playoff spots (and division titles) and a third winning season out of some of the worst rosters in the NFL. He managed to get the Bucs to the playoffs with Chris Simms and Jeff Garcia at quarterback. That's quite an accomplishment, and Allen's personnel incompetence was a significant hurdle to overcome. Then again, Gruden was the reason Allen got hired in the first place.