Historically, the Buccaneers have been awful 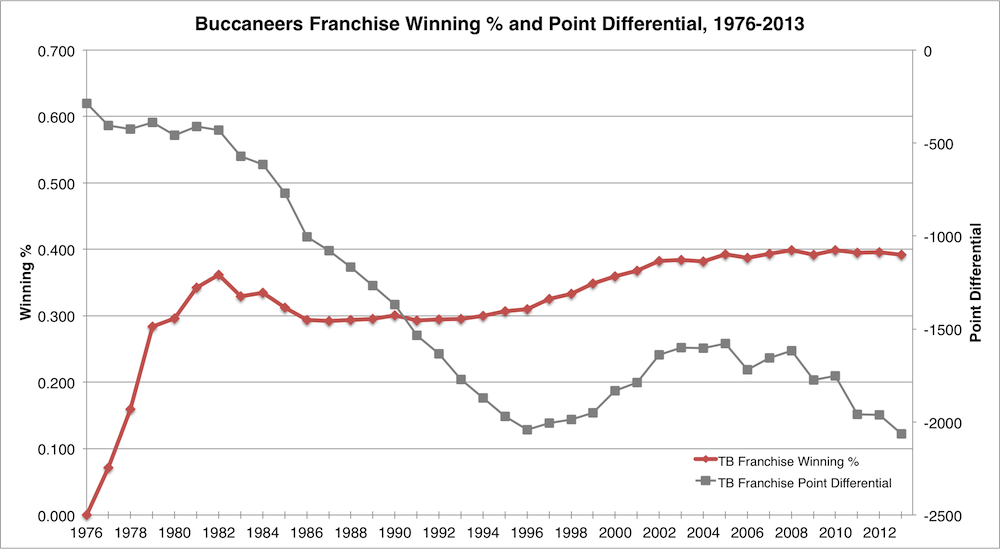 Share All sharing options for: Historically, the Buccaneers have been awful

The chart above comes from Will Kier over at Field Gulls, with the data from the awesome Pro Football Reference. It's a fairly depressing chart, really. A Super Bowl win, two more NFC Championship appearances and a six-year period of relevance are all the Bucs have to show for 37 years of NFL participation. Yech. Compare the San Francisco 49ers and fellow 1976 expansion team Seattle Seahawks, also from Will Kier.

The Tampa Bay Buccaneers have the single worst winning percentage among all NFL franchises. At 233-362-1, no other teams even comes close. Their .392 record is worse even than the Houston Texans, at .411, and the Arizona Cardinals at .417. The Cleveland Browns, you say? They come in at .535 over their history -- although that does include the entire Cleveland NFL history going back to 1946.

We can search for the positives, though: if we look at teams since 1976, the Buccaneers come in 31st: the Detroit Lions are worse! Hurray! The reconstituted Browns have also done worse, with a .321 record since re-entering the league in 1999. More hurray!

The most positive framing I can find: under the Glazers, the Buccaneers have gone 146-158. That comes in as the 21st-best performance over the 1995-now period, just ahead of the expansion Carolina Panthers and Jacksonville Jaguars, both at 144-160. So, yay. The Bucs are the 21st-best team in the NFL since the Glazers took over.

Can we please get back to winning now?