Why Doug Martin is still the Bucs' best running back

Share All sharing options for: Why Doug Martin is still the Bucs' best running back

Recall those days in Algebra learning about mean, median, and mode? Remember how you had to create that silly box-and-whiskers diagram from the median? You were probably wondering, "The process is simple, but when exactly is this ever going to be used?"

There is a debate on who is a better running back for the Tampa Bay Buccaneers between Doug Martin and Bobby Rainey. Some choose to neglect Martin's rookie season where he was selected to go to the Pro Bowl and want to focus on his 2013 production by looking at averages. In 2013, the Bucs had gone through three running backs due to injuries, Martin, Mike James, and Rainey.

From this stat, Rainey does look like he's a more productive back than Martin, but James is head and shoulders above if we look solely on average, or yards per carry (YPC). All stats were gathered from ESPN.com.

What is particularly nice about this chart is the overlapping of running backs as well as the defensive rush rankings of the teams the Bucs encountered. From this breakdown, we see Martin's production dropped facing the first and second best run defenses. Martin ran against the 1st, 2nd, and 4th best run defenses in the league in 2013! In the first game, he had no blocking fullback. While in the fourth game, it was rookie QB Mike Glennon's debut. Rainey, on the other hand, only faced one top four rush defense.

The box is the range from the lower median, or Lower Quartile, and the upper median, or Upper Quartile.  We rename the lower and upper medians as quartiles to not confuse those medians with the Median of the total list of entries. The Lower Quartile is the lower median between the lowest entry to the Median. Similarly, the Upper Quartile is the upper median between the Median and the highest entry. Again, we are finding the frequency of production in finding all three medians: the Lower Quartile, the Median, and the Upper Quartile. What this does is remove some of the extremes on both ends of the entry list, or aberrations. For example, in 2012, Doug Martin had produced a one game YPC of 10.0. Obviously, that is an extreme and not often repeatable.  We are looking for repeatability, or rather consistent frequency of an event occurring. 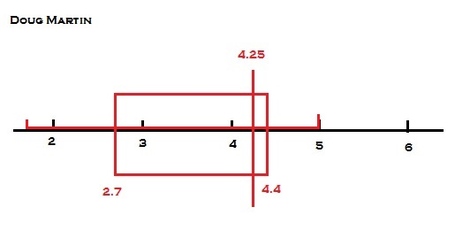 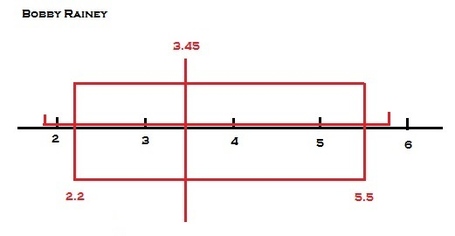 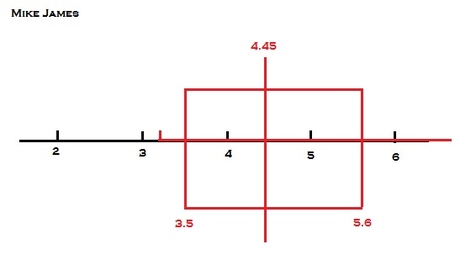 Included in the stats is the Median-Mean difference. This stat tells how the event that occurs most often differs from that of the total season's average of YPC. Looking at Martin's Median-Mean difference exposes that Martin is more likely to produce a higher YPC per game than state that Martin's season average YPC. This also reveals that Martin is more consistent to produce a higher YPC than Rainey on a per game basis.

Martin: 1.7, Rainey: 3.3, and James: 2.1. The Box describes the range of frequencies of a certain event occurring.  The Box eliminates extremes in the entry list while clumping the events, or entries, that which occurs most often.  Martin possesses the smallest range, 2.7 to 4.4 YPC, 1.7 YPC range variance.  Rainey has the widest range, 2.2 to 5.5 YPC, 3.3 YPC range variance. This stat informs us whose production is more consistent as well as whose production is more inconsistent. Rainey's production Box dictates that the team does not know what to really expect from game to game with that wide range of 3.3 yards per carry. Martin's variance is 1.6 yards per carry smaller than Rainey's variance range. The team can rely on Martin's production consistently than Rainey's.

Mean represents the average of the total production. What it does not describe is the reproducibility of said productions. Can the outcome be reproduced, or repeated, often or consistently? This is where Median and the Box-and-Whiskers' diagram becomes a helpful tool. Frequency is the number of occurrences of a repeating event per unit of time. We can interchangeably use reproducibility or repeatability with frequency, if that helps to understand what the Median and the Box-and-Whiskers diagram is trying to display.

While Rainey's mean was 3.9 YPC for the whole season, his ability to repeat it is not so.  In fact, Rainey's Box exhibits the inability to repeat it consistently. Whereas Martin's mean, 3.6 YPC, is 0.3 yards per carry lower than Rainey's, Martin's Box informs us that he can repeat his production more than Rainey. Not only that, but Martin's Median within that Box dictates he has surpassed his mean YPC with a 4.25 yards per carry production. Martin was able to repeat around 4.25 YPC more often. Rainey's Median was 3.45 YPC. That is 0.8 YPC less than Martin's Median. This information does not take into account the strength of schedule in respect to rush defense.

While average, or mean, is a common statistic, it does not necessarily paint a picture full of depth. It does not show a pattern, consistency, inconsistency, or reproducibility. There have been plenty of comments that Doug Martin is not as good as Rainey, with 2013 season being the reason why while noting Rainey's YPC total average. Doug Martin was a Pro Bowl running back in 2012, but some fans dismiss his 2012 production due to his injury in 2013.  Thankfully, I found a way to express how Martin is still a better running back by finally understanding why we were introduced to mean, median, and mode as well as learn how to plot and draw a Box-and-Whiskers' diagram. It was all about frequency production! Never in my life have I ever thought of using Box-and-Whiskers outside of school, but surprisingly there is a direct application!

Although many fans do want to discount Martin's 2012 season, I went ahead and did a Box-and-Whiskers diagram for Martin's 2012 production. Maybe we can see if there is anything worthwhile from 2012 to 2013 from presenting the diagram. 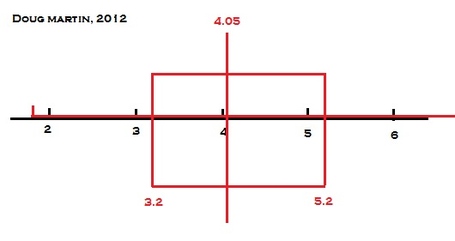 The Box-and-Whiskers diagram for 2012 reveals that Martin not only shrunk his variance in his 2013 season, but also improved his Median by 0.20 YPC. Martin's Median of 4.05 YPC differs from his total 2012 mean YPC of 4.6, just in case one was curious of Martin's total average YPC production. Comparing Martin's 2012 and 2013 Box-and -Whiskers' productions, Martin was having an improved year in 2013 before he fell to injury in the first Atlanta game.  Martin was rushing 1.1 YPC more than James in the same Atlanta game, where both had similar running attempts (as denoted in the article). And despite Martin's low production in two games against the top two rush defenses as well as the running against the fourth best rushing defense, his Median in 2013 was still better than his 2012 production. The 2013 season exposes that Martin actually improved his ability to reproduce, or repeat, gaining around 4.25 YPC, a 0.20 yards per carry improvement between the years.

I do not know why Doug Martin is underappreciated amongst Bucs' fans, but I hope this look at a frequency production on a per game basis paints a better picture of Martin, the competition he faced in 2013, and his importance to the team.  Also, it seems as though Mike James is not receiving any love for his work in 2013. Yet, I am happy to have this problem of having three more than capable running backs at our disposal.