Share All sharing options for: NFL Playoffs Results and Opponents 2014: Divisional round matchups

The 2014 NFL playoffs are off to a roaring start as the final two Wild Card games wrapped up today. The San Francisco 49ers beat the Green Bay Packers in a thriller, 23-20, while the San Diego Chargers managed to beat up the Cincinnati Bengals as Andy Dalton struggled in the cold.

As for the matchups next weekend: the Indianapolis Colts will take on the New England Patriots in Foxborough on Saturday, while the New Orleans Saints will travel to Seattle to take on the Seahawks in a repeat of the infamous earthquake game a few years ago. The Carolina Panthers will host the San Francisco 49ers on Sunday, while finally the San Diego Chargers will travel to Denver to take on the Broncos.

We probably won't see the ice-cold games we saw this week, although the Patriots and Seahawks don't have the warmest stadiums in the NFL. As usual the quarterbacks will be the big names to watch next week, with not a single remaining playoff team lacking a big-name starter. 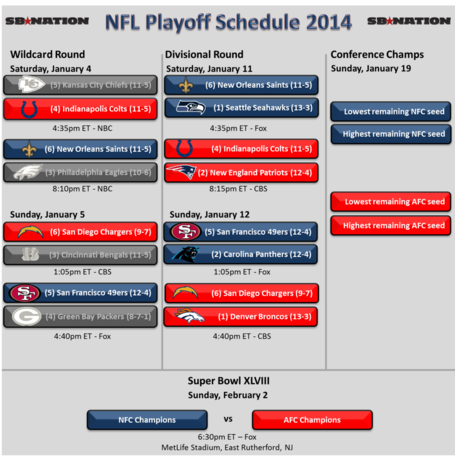