The NFL is contemplating a possible suspension for Dashon Goldson.

Share All sharing options for: Dashon Goldson could face suspension for helmet-to-helmet hit

The NFL is currently discussing whether or not to suspend Dashon Goldson for a hit on Jaron Brown late in the game between the Tampa Bay Buccaneers and Arizona Cardinals, according to Adam Schefter. Goldson was hit with a personal foul on the play, his third of the season. He has picked up $130,000 in fines this year due to two hits to the head of defenseless receivers. He was initially suspended for his second hit, but that was reduced to a $100,000 fine on appeal.

The hit on Jaron Brown did not look like a helmet-to-helmet hit. No matter how often I watch that, it continues to look like Dashon Goldson hit Brown in the chest rather than the head. This screenshot comes at approximately the point of impact. 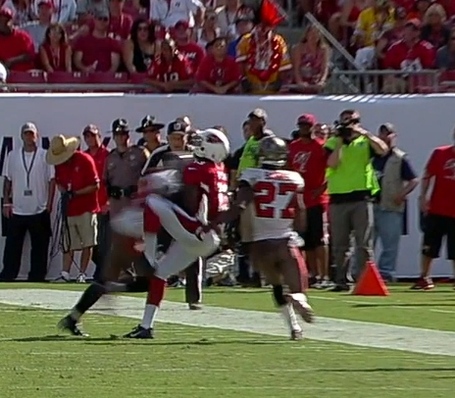 Goldson has his head turned to the side, he's hitting the receiver in the chest with his shoulder and there appears to be no contact to the head/neck-area. Brown looked like he suffered a concussion on the play, but that probably occurred when he hit his head on the ground.

I had no problems with the previous fines issued to Dashon Goldson. But suspending him for this hit would be a travesty.