Bucs-Cardinals: 10 Things We Think We Learned

Another week, another heartbreaking loss.

Share All sharing options for: Bucs-Cardinals: 10 Things We Think We Learned

So many things change, so many stay the same. As the Josh Freeman soap opera begins to spin out of control, the Bucs lost again on Sunday.

Did we learn anything more? Let's find out.

1. The Bucs' offensive line is the most overrated line in the NFL. I had to say it. Donald Penn, beaten again by a linebacker who was on the practice squad a week ago. Davin Joseph ole blocking for most of the game against Darnell Docket and Calais Campbell. Carl Nicks and his 350lbs getting driven back into the backfield. The Cardinals absolutely dominated the line of scrimmage on Sunday, especially in the running game, and it showed.

2. For about 55 minutes, Quarterback Mike Glennon was an improvement over Josh Freeman. Yes, the game plan was much simpler for Glennon with short passes, few attempts farther than 15 yds but unlike Freeman, Glennon actually worked through his reads, he didn't stare down his targets and he delivered an accurate ball (at least in the first half). Then with 5 minutes left, the offensive coaching staff decided to put the ball in the rookie's hands deep in his own side of the field. First, he challenged Patrick Peterson and lost. Then he was nearly sacked for a safety. Then, once the damage had been done and he's trying to rally the Bucs, he's hit as he's throwing the football and Patrick Peterson got him again to end the game.

I don't blame Glennon on those instances, I blame Schiano and the coaching staff. They should know better - deep in their own territory and nursing a 7 point lead to have the kid throw the football (especially after Martin got a 4 yard run on first down against a tiring Cards defense).

3. Speaking of Josh, you can't blame this one on him (although the Buccaneers Official App apparently thought Freeman made his way down from the "inactive suite", snuck into the game and attempted a pass - incomplete, of course). 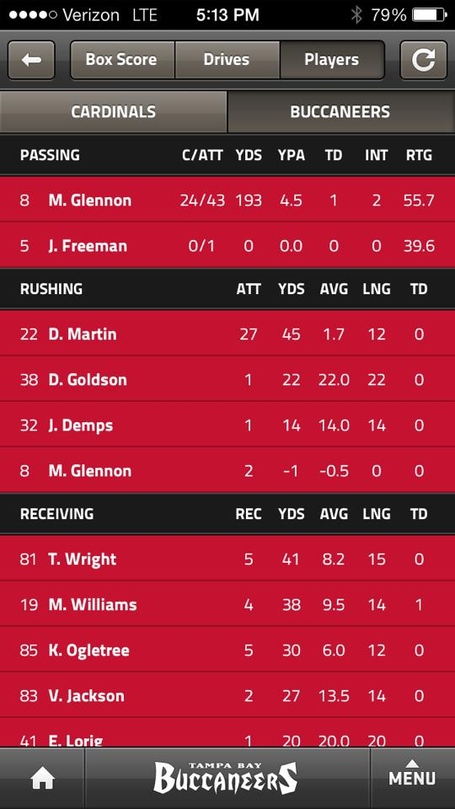 So if you change the quarterback but the results are the same - who do you blame next? That's what happens when you make these decisions. If things don't change and in the end you still lose ballgames, you've lost your scapegoat and now the finger gets pointed directly at you.

I don't know if the Bucs would have won Sunday with Josh at Quarterback. One thing is certain, I don't think the Cardinals would have had the blatant disregard for the passing game that they had on Sunday.

4. If you're going to blame the Bucs defense for blowing a 10 point fourth quarter lead, I'm done talking to you. I don't know what more this defense can do to get this football team a victory. Three turnovers, two forced in the red zone, they held the Cardinals to 56 yds rushing and shut out the Cardinals for three quarters.

Arizona's scoring drives were 26 yds, 13 yds and 29 yds. The defense played their hearts out on Sunday and once again deserved a better fate.

5. It was an epic match up with two future Hall of Famers in Darrelle Revis and Larry Fitzgerald. Revis shut out Fitz in the first half but the veteran Cardinals wide out came back with a strong fourth quarter. Arizona took advantage every time the Bucs switched their coverage to zone, allowing Fitzgerald to gets some grabs. Of course, Revis got a key interception late in the third quarter that snuffed a potential scoring drive for Arizona. But ultimately, Fitzgerald won the battle with a wicked cut at the goal line that left Revis leaning the wrong way and allowed  Fitz to get inside position and an easy touchdown. Revis may have thought he had help inside that never arrived but one thing is certain, Darrelle's instincts - normally spot on - failed him this time.

6. The Bucs dominated the first three quarters but only found themselves up 10-0. Then, as most bad teams do, found a way to self destruct in the fourth quarter. The fumbled exchange between Martin and Glennon started the downward spiral of ineptitude on offense that cost Tampa Bay the football game. Coach Schiano is now 0-6 in games decided by 3 points or less. Those games are won and lost with critical strategic decisions in the moments that dictate the balance of the games. Schiano has failed in each and every opportunity.

Unfortunately, it's not something uncommon for Coach S as he had the same knock at Rutgers. The line at Rutgers was, "Good coach Sunday through Friday, terrible on Saturday."

That's translated to Sundays now in the NFL.

7.  I felt bad for Doug Martin. Getting no support from his offensive line, the Dougernaut spun, dove, juked and did everything he could to create space for himself against the swarming Cardinals defense. Make no mistake, Arizona has stuffed everyone's running game - but the fact they were doing it with a decimated linebacking core really makes you question the blocking schemes for the Bucs. Yes, the Cards were keyed in to stop the run. Teams do that to Adrian Peterson and the Vikings every week - yet he finds a way. That's not an indictment on Martin - who the few times he found a sliver burst through the hole - but on the Bucs' offensive line and offensive coaches.

8. So 0-4 and two weeks to think about it. If you would have told me the Bucs would go oh-for-September I would have thought you were crazy. Yes, the team should be sitting at 3-1 right now. It's irrelevant. They're not, their season is over and now we have to figure out what to do next.

I wonder if General Manager Mark Dominik truly wants to trade Freeman at this point. I'm not sure he believes Freeman is the problem. The coach plays who he wants to play and that's that. The fact that they didn't even have Freeman on the sideline says a lot. No, a quarterback with 5 years of starting experience and a year and half in this offense may not be a help to your rookie quarterback trying to figure stuff out. Riiiight.

What distraction could he possibly provide? Would he tell Glennon to throw to the guys in Red? Do you think every incomplete pass your offensive starters would begin to glance longingly toward their former quarterback?

It's the insecurity of this head coach in his own decision and his fear that he's already losing the locker room that caused Freeman to be banished to the "inactive suite." What exactly is an "Inactive suite" anyway? We see the inactives on the sideline in street clothes all the time. Heck, there's guys there whom I have no clue who they are.

Schiano's players are still playing hard for him and that's why he'll still have his job on Monday. We've seen what happens when players quit on their coaches.

Still the maniacal mind games and how he's completely butchered the Freeman situation has to be at a cost for Schiano.

This football team is stacked with talent, more talent than Raheem dreamed of having. I wonder if Rah had this talented of a football team where they would be.

Anyway, I digress. Back on point - what to do next. Not much left for this season but see where the Bucs end up in the draft. The worse the season goes, the better the draft pick and this is a banner year for quarterbacks. (Still professing my football love for Tampa's own Aaron Murray, who proved once again why I believe he needs to come back home).

But who will be making that pick? Dominik? I think Dominik filled the roster with enough talent to win. Did he get the tight end he needed? No. Did he put all his eggs in the Revis basket and let quality free agents go to other teams? Yes. Has his team made the playoffs under his tenure? No.

If the Glazers decided to part ways with Dominik I wouldn't be surprised - especially with experienced GMs like Bill Polian and Scot Pioli out there. Those guys have Super Bowls and multiple playoff appearances on their resumes. Dominik doesn't.

Will Schiano be the head coach? Right now, I'd say no. Although we all should keep in mind that the Glazers have always given their coaches at least three seasons.

Still, the way Schiano has lost games with his coaching mistakes, the money spent on the roster, the negative press on how he handled Freeman, the fact that there's not a single player on that roster that will stick up for him (although they'll toe the company line in public) and the likelihood that at the bare minimum we're dealing with a fractured locker room leads one to believe that the Glazers simply cannot justify another season with Schiano.

It's a dangerous pattern the Bucs are falling into. Churning through coaches and quarterbacks are what led to the Yucks. Yet, we need to understand that the Yucks are back right now. The Tampa Bay Buccaneers are the laughing stock of the league.

Someone's going to get a young QB whose played five years and done some good things in the league for a bag of peanuts.

The Bucs will likely have a new coach and quarterback (and maybe a new GM) in 2014  - starting over again. This is a roster that doesn't need to be rebuilt - but its also one that doesn't deserve a rookie QB unless he's Russell Wilson or Andrew Luck.

I think Murray's good - is he that good? I don't know. Are any of the rookies coming out that caliber? Maybe Bridgewater - but the Jaguars have the inside track on the Tank for Teddy campaign.

9. Last year, the Bucs had their bye week after four games and then turned it on for the next six weeks. It could happen again - but I wouldn't bet the mortgage on it. I think what we've seen this season is what we're going to see until the defensive players decide their tired of carrying the load and start mailing it in.

10. One other note with a rookie at QB, the production of everyone on the offense will drop until Glennon can complete a pass over 15 yds. 4.5 yards an attempt should be a rushing average, not a passing yards per attempt average. Teams will play the same way the Cards did - take away Doug, make Glennon beat you. It's going to be a tough year for Martin and both Vincent Jackson and Mike Williams will see their gaudy averages drop.

With that said, you have a rookie QB - everyone must step up their game. The offensive line must block better. Jackson needs to have more dog in the fight (Peterson essentially ripped the football away from him on his first pick) and Williams needs to make some plays after the catch. Kevin Ogletree needs to know where he is on the field and catch the damn ball.

Bonus: Jeff Demps is fast but come on Jeff, you may run 110 yds in nine seconds but that's without 11 guys tearing down the field after you with designs on knocking you back to Russia or wherever the heck your last meet was. If you're 10 yds deep in the end zone, fricking stay there.

Bonus Bonus: The dreaded kneel down attack reared it's ugly head again. I've changed my mind on this practice. It is a bush league maneuver that jeopardizes the health of the players involved. I think the first time it happened in New York, that Buc team needed to know they'd keep fighting until the final seconds tick off. This team fights to the final seconds. The lesson has been taught. They don't need this anymore. Now it just looks classless.