Share All sharing options for: Darrelle Revis Zone Coverage Watch: the Buccaneers have lost their minds

The Tampa Bay Buccaneers continue to have no clue as to what they're supposed to be doing with Darrelle Revis. Against the New England Patriots, the Tampa Bay Buccaneers had him in a form of zone coverage on 19 of 38 snaps where I could discern the coverage. Outside of the right red zone, they had Darrelle Revis in man coverage with no safety help exactly once -- and they didn't even use that advantage to blitz the Patriots.

The Bucs are wasting Revis' talents 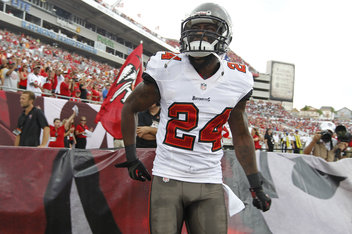 The Tampa Bay Buccaneers have the best cornerback in football, but they're not using him like they think he's anything more than a street free agent.

Note that trying to tell whether a team is playing zone or man coverage can be a very subjective thing. With the proliferation of matchup zone coverage and different pass-off points in various coverages, I can't be completely certain whether Revis is following a receiver down the field because he's in man coverage, or because he's the deep player in Cover 3 and has to take the vertical receiver, or because he has the #1 deep threat to that side but would have passed him off had the receiver run a crossing route. My charting is a best estimate, and does not represent absolute knowledge of coverage.

Still, keeping that in mind, playing seeming zone coverage on 19 of 38 plays is a little disturbing. Yes, 38 plays -- there were four plays where the pass was so quick I couldn't possibly see what the coverage was, so I didn't count those. Add in six more plays where the Bucs were playing man coverage with two safeties and nine where they had a single high safety not cheating away from Revis, and the Bucs took advantage of Revis' truly unique man coverage skills exactly four times. Three of those plays occurred in the tight red zone, where there's not enough room to give safety help to anyone.

To make matters worse, when they did play man coverage the Bucs preferred to line Revis up in off coverage, which they did on 12 of his 19 man coverage snaps by my count. Revis is a great cornerback who can play any kind of coverage, but off coverage leaves anyone vulnerable to quick underneath passes, and the Patriots took advantage of that a couple of times.

And here I thought the Bucs had learned. Bill Sheridan even said last week that Revis "is not as dependent on having a half field safety behind him" and that as they go forwward they would definitely "try and orchestrate that into scenarios when we can, whether it's man coverages or pressures."

Oh yeah? I haven't seen any of that. None of it Nada. Zip. Nil. Niets. Nichts. Rien. And that's getting to be pretty ridiculous. You have the best cornerback in the NFL, you're paying him $6 million per year, you gave up two draft picks and you're using him like he's Danny Gorrer.

To be completely fair, the results so far have been pretty good. Not truly great, but pretty good -- and that's very important. Playing interesting schemes is only relevant insofar as it gets you good on-field results. And, again to be fair, it's not like the Patriots really have a number one receiver to shut down -- though it certainly couldn't hurt to just create a numerical advantage by taking away one option on every snap.

I tabulated Brady's success throwing at each coverage.

And yet, if you looked at the tape, you just wouldn't be able to tell that the Buccaneers have the best cornerback in the NFL on their roster. They just don't use him like it. You can see the movement skills and the awareness -- but you can't see him use them in any relevant way. There's no tilting coverage away from him. There aren't any big blitzes or disguises that use his skills. There's nothing.

Maybe that's because the Buccaneers have been wondering about his health, although he's looked perfectly healthy and missed just three snaps in week two and none against the Patriots. Maybe the lack of a number one receiver kept the Buccaneers from using him that way, although I don't see how that would keep them from tilting coverage to other players. Maybe, just maybe, we'll see all of this rectified against Larry Fitzgerald this week.

Somehow, I doubt it.