Saints vs. Buccaneers: Running and passing against New Orleans - All-22

The Tampa Bay Buccaneers offense dominated on the ground but couldn't get anything going through the air against the New Orleans Saints. We take a look at the All-22 tape.

Share All sharing options for: Saints vs. Buccaneers: Running and passing against New Orleans - All-22

After reviewing the defense against the New Orleans Saints, we can take a look at the Tampa Bay Buccaneers offense. Despite a really bad day passing the ball, the Buccaneers still managed to beat up on the Saints on the ground. How did that happen?

After struggling to run the ball against the New York Jets, the Tampa Bay Buccaneers got Doug Martin a whopping 144 yards on the ground. He managed just 65 yards on 24 carries the week before. So what's the biggest difference? To me, spreading the field helped. The Jets crowded the line and Doug Martin regularly faced eight-man boxes, while the Bucs didn't try to spread the field to open up holes. Not so against the Saints. 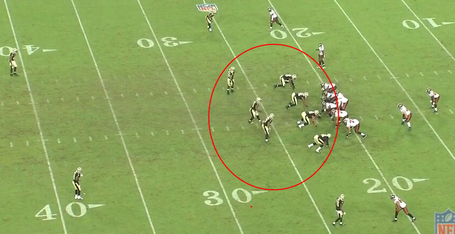 That's a six man box, as the Saints are guarding against the Bucs' passing attack with two deep safeties. And one of those six players in the box is guarding Kevin Ogletree in the box. It should be immediately obvious that the Bucs are going to have running room, here. A big reason for that is the fact that the Saints play so far off the ball.

Martin is already through the line of scrimmage before the Saints' safeties even react. That will doom any run defense, as it's really hard to stop six blockers with six defenders in the box when the offense gets to choose where they run. The safety will usually have to fill the hole, but Roman Harper is nowhere close here.

Another reason why the Buccaneers get some running room: they win at the point of attack.

As you can see, everyone is winning his block and there are two big holes. Curtis Lofton, number 50, has to stay in the hole in case Martin cuts back, and once Martin commits to run behind Erik Lorig, Lofton will be blocked by Carimi, who's preparing to come off his double team block.

Meanwhile, fullback Erik Lorig is leading the way for Martin and is going to lay a crushing block on David Hawthorne. Lorig played just 15 snaps against the New Orleans Saints, but having him back helped the Bucs' rushing game on a few crucial plays. Mostly, it was just comforting to see a fullback win his blocks consistently -- that's something the Bucs really missed against the Jets.

It is not a complicated run (no NFL runs are truly complicated), but it is tough to defend for an opponent because the Buccaneers spread the field, force the safeties deep due to the threat of their passing game and have the talent on the offensive line to win at the line of scrimmage against most NFL defensive lines.

Five years into the NFL, Josh Freeman still has some unseemly habits as a passer. The foremost of these is a tendency to force passes into tight windows off his back foot when facing pressure. It's not an uncommon failing in strong-armed pocket passers who seem to have convinced themselves that they can make any throw, but that kind of thing leads to a lot of turnovers, as it did against the Saints.

On second and five from the New Orleans 45, the Tampa Bay Buccaneers go for a deep shot off play-action. You can see all those Saints crowded around the line of scrimmage, making it the perfect situation for a deep shot, even if that safety is aligned really, really deep. They want to force the safety deep with Mike Williams' route and get Vincent Jackson's crosser underneath that, behind the linebackers.

Problem number one: the cornerback isn't threatened by Mike Williams and safety Malcolm Jenkins can bite down on Jackson's route with impunity. Freeman is about 1.5 seconds from throwing the ball here and Jenkins has already started jumping the route. There's another of Freeman's problems at work: staring down his receivers. A slightly mitigating factor is that he really has nowhere else to go -- even dumpoff Doug Martin is covered right now and everyone else is staying in to block.

Gabe Carimi's not the only one who gets beat, you'll note, but his man is the main cause of pressure here. Freeman may have been able to squeeze that ball in there had he had a good base and stepped into his throw -- but throwing off his back foot takes a lot of the power out of his throw. Which leads to an easy interception for the New Orleans Saints.

Things like these are why I'd be hesitant to offer Freeman a new contract.