Saints vs. Buccaneers All-22: How Tampa Bay fooled Drew Brees

The Tampa Bay Buccaneers managed to fool Drew Brees into throwing two interception. How did that happen? We take a look at the All-22 footage.

Share All sharing options for: Saints vs. Buccaneers All-22: How Tampa Bay fooled Drew Brees

Despite the complaining we do about how Darrelle Revis is used, the Tampa Bay Buccaneers actually have a very good defense, including a good pass defense. With nine sacks and three interceptions on the season they're one of the league's best pass defenses, and the results have been good despite a few mishaps.

One thing that impressed me watching the game tape against the New Orleans Saints was how well they disguised their coverages and fooled Drew Brees repeatedly. Both of his interceptions were the result of the Bucs simply fooling the veteran quarterback into making bad decisions. The coverage wasn't what he thought it was, and combined with a little pressure the Bucs managed to get good results.

The New Orleans Saints led 3-0 and the Bucs had just punted them the football after a four-and-out. The Saints have the ball at their own 23-yard line on first down, when they run up against the following coverage and route combination. 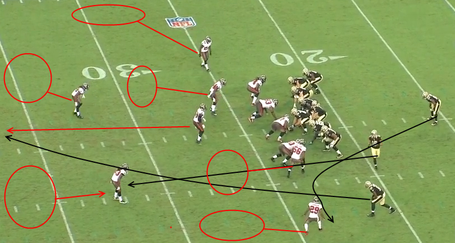 The Bucs are running what looks like a standard Tampa 2 coverage, while the Saints are running a play-action pass trying to threaten the Bucs defense deep. Lance Moore and Marques Colston are both going to run deep, with Moore (the inside receiver here) running a stop route. If Barron jumps on Moore, Brees can hit Colston deep. If he keeps up with Colston, Moore is likely to be open. If all else fails, they can hit the running back on a dumpoff. As with most play-action passes, it's a half-field read with everyone on the other side staying in for pass protection.

At the snap, this is what Brees expects to see. 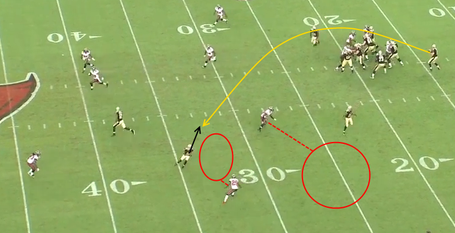 With Mason Foster running down the middle to keep up with Colston and Mark Barron over the top of him, Brees thinks he can hit Lance Moore before Leonard Johnson can intercept the ball. Dekoda Watson is following the running back to the flat and shouldn't be a factor. With the ball thrown a little inside to take Johnson out of the play, Brees is looking at a big, 15-yard reception.

Except, this is the coverage the Buccaneers are actually running. 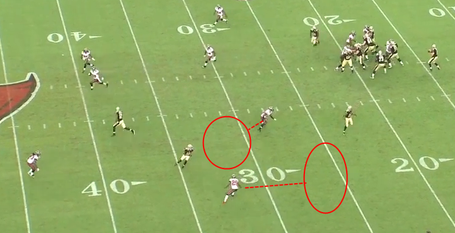 Dekoda Watson follows the back to the flat, but as soon as he comes close to the numbers, the back becomes Leonard Johnson's responsibility while Watson stays in coverage underneath Lance Moore's route.

That is one hell of an athletic play by Watson, too -- most linebackers should be able to tip that ball, but not a lot of them would be capable of making the catch. Watson hasn't had a lot of playing time so far, in part because the Bucs play a lot of nickel and dime and in part because he's splitting time with Jonathan Casillas, but sometimes his athleticism flashes and he just makes special plays.

The New Orleans Saints were up 13-7 at the start of the first quarter and had managed to get to the Bucs' 22-yard line. On third-and-seven, the Saints were looking to add another touchdown to their lead, making it very hard for the struggling Tampa Bay offense to come back. To do so, they went to one of Sean Payton's favorite plays: four verticals. 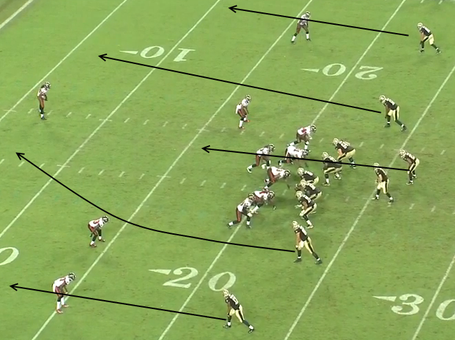 I haven't played much Madden in recent years, but you used to be able to just call this play over and over and hit the tight end for big chunks of yardage. Which is exactly what Drew Brees is going to try to do, here. The idea of the play in general is to threaten the safeties: unless teams are playing quarters coverage, they are going to be outmanned down the field. There are decision points built in for receivers to break off their routes if they certain types of coverage, too.

Based on the pre-snap look, Brees would expect to see man coverage with a single high safety here: Cover 1 Man. The Bucs are also threatening blitz with six defenders crowded around the line. 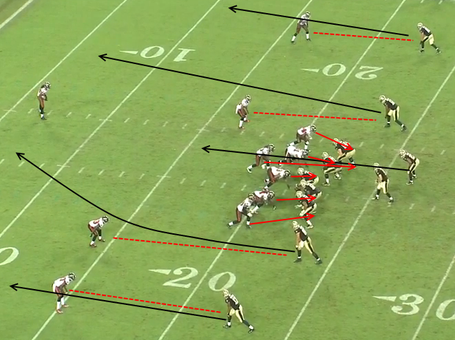 Brees should be able to hit Jimmy Graham on the post-route to his left, here. Not only is he matched up against Ahmad Black, which is a massive mismatch, but Black has no outside help which means he can't let Graham outside of him -- and that means the inside is going to be open. Yes, they're running toward the safety, but this should be an easy first down.

Unfortunately for Brees, this is not actually the coverage the Bucs are running. 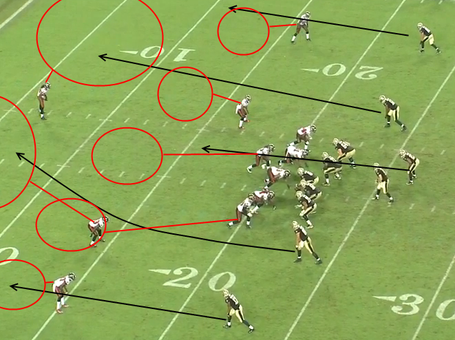 Black is going to drop deep as a half-field safety while the Bucs have five underneath defenders, rushing just four of their six players on the line. The key player here is Mason Foster, aligned to Drew Brees' left. He's going to fake rushing -- and then fall back into coverage. 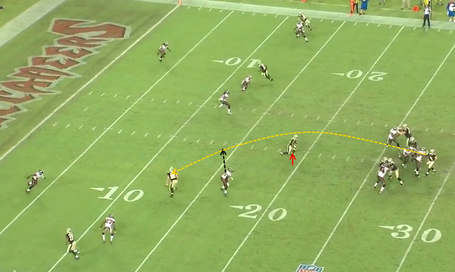 Brees simply doesn't seem to notice Mason Foster in coverage, and throws the ball right to him. A big part of that was the pre-snap disguise, but another part of it was the pressure the Bucs brought. If this ball is thrown perfectly, this is probably still an interception. But there's a simple reason why it isn't thrown perfectly: pressure.

The Bucs have used quite a few 3-4 alignments over the past two weeks in pass rush situations, although the rush concepts are still of the 4-3 variety: everyone go shoot a gap and get to the quarterback. Here, though, they're running a stunt. They hope Clayborn can occupy the guard and tackle to the right, while Bowers and McCoy have to get the attention of the remaining three linemen. If all goes well, Lavonte David can loop inside and have either a free rush, or only the running back to beat.

And it works! The running back was keying on Mark Barron and with him dropping in coverage, he can run out for a checkdown. The key is Gerald McCoy: he has to occupy both the center and the guard to allow David to come in free -- and he does a great job. In fact, it looks like he uses the old Justin Smith trick: if a lineman's trying to come off you to block someone, just hold him and the refs are never going to see it or call it -- they just can't see it.

That bit of pressure is enough to affect Brees' throw, and combined with the coverage disguise it's an easy interception for Foster -- which then turns into an 85-yard touchdown.

If the Bucs can keep up these disguises against Tom Brady and continue to fool top-level quarterbacks they have a genuine chance of doing some real damage this season.