The Tampa Bay Buccaneers knew who they were buying, and appear to have done little to discourage him.

Share All sharing options for: Dashon Goldson's suspension is justified

Contrary to popular belief, the Tampa Bay Buccaneers are not being targeted by the NFL. Instead, the league is targeting a repeat offender. Someone who had racked up $77,500 in fines in December of last year, which would put the total at $107,500 right now. Someone who is notorious for hitting defenseless receivers in the head. You know, the big crusade they've been on for three years because they covered up the effects of concussions for a very long time? Yeah.

This is the best screenshot I could find that demonstrates why Goldson's getting suspended for this hit, aside from his league-leading 15 personal fouls since 2010. There was no attempt at a normal tackle, as Goldson was lowering his helmet and aiming at Sproles' head. The latter is slightly unfortunate, as Sproles does fall down a little as Goldson lines up his hit, but why, exactly, is he trying to hit a running back who is 8" smaller than him low? Goldson has to be smart about these hits, and right now, he isn't. 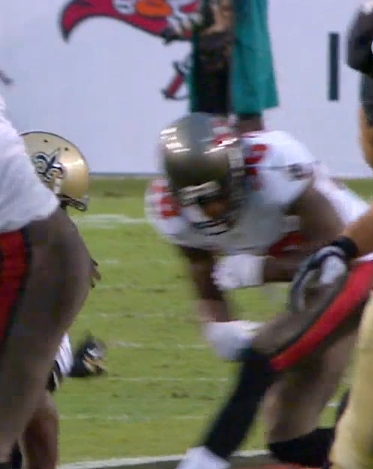 So here's the question we really should be asking: why is Dashon Goldson lowering his shoulder and leading with the helmet and not trying to wrap up against a running back who is 8" smaller than him?

The NFL clearly thinks that's the problem, and I'm inclined to agree. They focused on the fact that there was "no attempt whatsoever to wrap up [his] opponent or make a conventional tackle on the play."

This wasn't accidental head-to-head contact. It happened because Dashon Goldson seems to love hitting people with and in the head. And that's something the NFL is trying to remove from the league. And the shame of it all is that Goldson really doesn't need any of that. He is a terrific safety who does not need to make illegal hits to make an impact on the game.

Unfortunately, that's about all he's known for right now.