Dashon Goldson will miss one of the most difficult games of the season for the Tampa Bay Buccaneers with a one-game suspension.

Share All sharing options for: Dashon Goldson suspended against Patriots for personal fouls

The Tampa bay Buccaneers will miss Dashon Goldson against the New England Patriots. The Buccaneers have announced the NFL-imposed one-game suspension of the safety for repeated personal fouls, the latest occurring on a hit on Darren Sproles on Sunday against the New Orleans Saints. He also had a hit to the head of Jeff Cumberland against the New York Jets the week before. The suspension will be without pay.

Bucs penalties are getting out of control 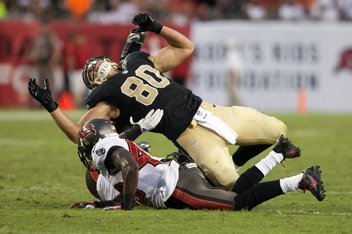 If the Buccaneers would stop shooting themselves in the foot, they'd be 2-0.

Dashon Goldson has accrued 15 personal fouls since 2010, which tops the league, according to Adam Schefter of ESPN. It is not clear whether Goldson will appeal the suspension, although I would expect him to. Ed Reed was suspended for one game for similar violations last season, but his suspension was overturned on appeal and he was fined $50,000 instead.

Dashon Goldson has appealed the suspension, according to Max Luckan, which means a hearing and decision will occur ahead of Sunday's game. Goldon's chances of winning that appeal seem slim given his history of penalties.

In the NFL's statement published on Buccaneers.com, NFL VP of Football Operations Merton Hanks points out that Goldson was not interested in making a regular tackle.

As far as I know, Goldson is the first player to be suspended by the NFL for personal fouls, but the NFL  has threatened suspensions since 2010.

With Goldson out, Ahmad Black should start against the New England Patriots. The Buccaneers relied heavily on a three-safety package with Black, Goldson and Mark Barron against the Saints, in part to counter tight end Jimmy Graham. With the possible return of Rob Gronkowski for the Patriots, the Bucs will have to figure out a different way to stymie the Patriots passing attack.