The Tampa Bay Buccaneers traded for the best cornerback in football, but they're not exactly using him to the best of his abilities.

According to Mike Garafolo of Fox Sports, Darrelle Revis is not happy with Greg Schiano's strict rules and the lack of man coverage so far (h/t The Pewter Plank). Watch the video below.

This is a problem. As I wrote earlier this year, it makes no sense to get the best cornerback in football and then start playing a bunch of zone coverage. Darrelle Revis is a game-changer because of what he allows your defense to do. Rex Ryan got the most out of Revis by singling him up in man coverage and blitzing a ton. The Buccaneers have been effective with their blitzes so far, notching a league-leading nine sacks, but they're not using Revis to his full ability.

And Darrelle Revis has held up very well in man coverage through two games, when given the opportunity. He's given up exactly one catch, which came when the New York Jets ran a rub route and he ran into Mark Barron.

Now, to be fair, the Buccaneers' gameplan against Drew Brees was largely effective as they managed four sacks and two interceptions. Aside from a blown coverage due to communication issues, the Bucs did not give up a touchdown all game long. They did struggle to stop Jimmy Graham, who managed 16 catches for 179 yards, but he was the only Saint to do significant damage.

However, there are still issues with how they are using Darrelle Revis. Even when the Buccaneers use Revis in man coverage, they aren't matching him up against the best receivers. This is what happened on the final, game-losing drive of the game against the New Orleans Saints. 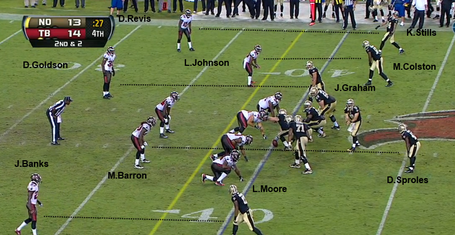 The Tampa Bay Buccaneers kept those matchups throughout the three-play drive. That's not a bad thing -- you're not going to be able to change play to play in a two-minute drill. You have to pick a base defense and stick with it throughout the drive.

The problem is the matchups the Buccaneers chose. For some reason I cannot understand, they put Leonard Johnson in single coverage with Marques Colston, leaving Darrelle Revis on Kenny Stills. To make matters worse, they put Dashon Goldson on Jimmy Graham and Mark Barron on Darren Sproles. I like Goldson, but his strength is not man coverage -- and the only player to successfully limit Graham on the day was Mark Barron.

When you're choosing matchups that poorly, you are putting yourself in a situation to get beat. Drew Brees sees Marques Colston on Leonard Johnson, a physical mismatch in every sense of the word, and he can take that shot every time when there's a single high safety. Which is what he did, and how the Bucs lost the game on a last-second field goal.

Despite a close to dominant performance against one of the best quarterbacks in the NFL, the Tampa Bay Buccaneers once again managed to make mistakes at crucial times in the game. And Darrelle Revis is right to complain.