Josh Freeman is seeking a trade, per a CBS Sports report, creating some more drama in Tampa. The Tampa Bay Buccaneers are on the verge of collapse, if all of these reports can be believed.

The Tampa Bay Buccaneers have a problem on their hands. According to Jason La Canfora, Josh Freeman is expected to seek a trade ahead of the October deadline. League and team sources tell La Canfora that the relationship between Greg Schiano and his starting quarterback is "beyond repair".

Greg Schiano is seen as rigid, inflexible and "has struggled to connect with his players", La Canfora writes. Apparently, some officials at other teams believe Schiano is undermining Josh Freeman to get rid of Mark Dominik, which seems a little ridiculous on its face. Of course, we've seen such coach-general manager drama before (see: Jon Gruden and Rich McKay).

The Bucs are the NFL's new laughing stock 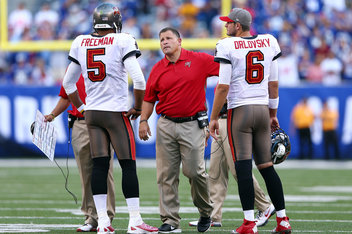 Controversy is swirling around the Tampa Bay Buccaneers, and it's quickly turning them into the new New York Jets.

While I'm not about to endorse the speculation, all of this is simply more evidence that the Tampa Bay Buccaneers are a public relations nightmare right now. Whether or not there's any truth to all the rumors swirling around the team, the presence of all this drama alone is a black mark for the organization.

If (and that is a big if) Freeman is indeed going to seek a trade, and the Buccaneers don't plan on starting the quarterback anymore, they may do best to acquiesce to his demands. Freeman is in the final year of his contract, and it seems increasingly unlikely that the Bucs will offer him a new contract. Letting him walk out the door with no compensation would be a waste, to say the least.

But finding a trading partner may be easier said than done. Bringing in a quarterback mid-season into a new system isn't something most teams would try. The fact that he's in the final year of his contract further diminishes any trade value.

If the Bucs indeed turn to Mike Glennon as their starter, they're unlikely to win many games this year. Glennon has talent, but he needs to take a few steps to be a worthy starting quarterback. And throwing third-round rookies into the fire tends to work out badly -- with Russell Wilson being an exception.

All of this drama could disappear quickly if the Buccaneers string together a couple of wins. That could start this afternoon against the New Orleans Saints. But if the Bucs lose, the season could spiral out of control quickly.