Buccaneers vs. Saints All-22 Preview: Matching up with New Orleans

The Tampa Bay Buccaneers will have their hands full when it comes to the New Orleans Saints offense.

Share All sharing options for: Buccaneers vs. Saints All-22 Preview: Matching up with New Orleans

I do want to focus a little on the defensive line, though. As we all know, the Tampa Bay Buccaneers love to call stunts on their defensive line. Defensive coordinator Bill Sheridan justified them by pointing to their positives in run defense, and he's absolutely right there: they're a major part of the best run defense in the NFL. Unfortunately, he also has a tendency to call the stunts on passing downs.

And he really shouldn't. Because the Buccaneers do have pass rushers capable of making an impact when given the opportunity, and Gerald McCoy is the most disruptive Buccaneer of them all.

That's what happens when you give McCoy one-on-one opportunities and a license to destroy offensive guards: he's going to impact plays.

Unfortunately, the Buccaneers still decided to run stunts on some of their third downs. Let's be clear, though: they also gave the Bucs plenty of straight rush opportunities on passing downs, and the blitzes they did run were largely successful, as evidenced by the team's five sacks. Still, stunts like this, even when combined with a cornerback blitz, just hurt the team's rush. 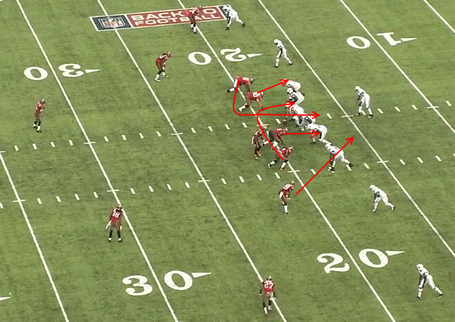 The Bucs are running two end-tackle stunts, with the defensive tackles pushing outside to take up a double team from both the guard and tackle, while the defensive ends loop around and hopefully exploit the gaps this could leave in protection. These stunts can work, mind you -- they just don't work very often for the Buccaneers.

Now, these stunts can certainly work. As you can see, McCoy actually takes up a double team here, which allows Adrian Clayborn to loop inside -- where he promptly runs into a center and decides to take the long way around. Part of the problem is the fact that this is double stunt and no one is occupying the center. The other problem is that the stunt to the other side of the line does not manage to take up a double team, which frees the right guard to take care of Bowers.

But the real issue here is that the Bucs take away Gerald McCoy's biggest asset: his first step. They're instead using him to set up Adrian Clayborn, which just doesn't make sense. Don't waste your best pass rusher to give other players opportunities. Moreover, these stunts take some time to work, too. You're not going to get instant pressure.

Matching up on Marques Colston and Darren Sproles

Meanwhile, the New Orleans Saints come to town tomorrow, and they present some real matchup problems. The Atlanta Falcons could feel that repeatedly on Sunday, and one player the Tampa Bay Buccaneers absolutely must stop this Sunday is running back Darren Sproles. With 22 rushing yards and 88 receiving yards, he was a major asset for the Saints last week.

The Saints repeatedly tried to get Sproles matched up on linebackers, and the Falcons had no answer for him. The problem is complicated: you can't put a cornerback on a running back, because then they'll start running the ball with Sproles and you're suddenly outmanned in the box. But if you put a linebacker on Sproles he's going to run away from him.

The Saints do this a lot. They motion Sproles around and get him matched up on linebackers who can't keep up with him in coverage, or even trust him to beat defensive backs. That wheel route was absolutely devastating for the Falcons, and it will be an issue for the Buccaneers, too. Mason Foster would be destroyed in space by Sproles.

Lavonte David may give the Buccaneers the best hope of stopping the running back. He certainly has the speed and quickness to hang with him, but David isn't the best coverage linebacker around. Zone coverage could be a major part of the answer, but Brees has a tendency to pick apart zone coverage if you can't get quick pressure.

The Saints offense is so mutliple and multi-faceted and run by such an accurate quarterback that you're constantly stuck with no-win matchup scenarios. Marques Colston is another example of the matchup problems Sean Payton manages to create. 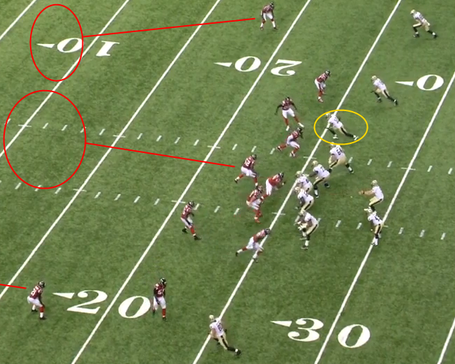 The Falcons have a very well-disguised Cover Three look, with five underneath defenders in zone coverage, here. It's tough to spot pre-snap, but Drew Brees doesn't need to spot everything: he can see the massive void in the middle of the field, where Akeem Dent is going to drop. Marques Colston is split close to the formation, which is something the Saints do a lot to use him to attack the middle of the field.

The opportunity is obvious to everyone who can see this overhead picture, and it was obvious to Drew Brees, too. 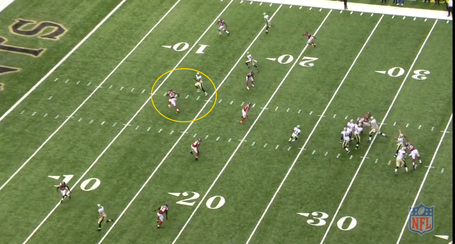 You can see the Cover Three look now: three deep defenders, and give underneath in zone coverage. Marques Colston, though, is going to blow this up. Linebacker Akeem Dent actually does an admirable job of getting deep, but he can't compete with Marques Colston, who's going to turn this into an easy touchdown.

If the Buccaneers want to stop the Saints, they have to figure out how they're going to cover all of these weapons. They can try to disguise coverages and beat Brees that way, but as Colston demonstrates, that's really difficult to do.

Fortunately, the Buccaneers do have options. Mark Barron should be a good match for Jimmy Graham, while Lavonte David has a decent shot at covering Darren Sproles. The real key is going to be what the Bucs do with Darrelle Revis: can he play the entire game, and who will he be matched up with? When the Jets faced the Saints in 2009, they chose to put Revis on Colston. But the Bucs may want to use him stop Lance Moore, while finding other ways to limit Colston.