The Tampa Bay Buccaneers could do no damage against the New York Jets, in part because their scheme was disastrously bad.

Share All sharing options for: Buccaneers vs. Jets All-22: Tampa Bay offense never challenged the Jets

The Tampa Bay Buccaneers were awful on offense against the New York Jets, and the blame lies with several people. It starts with Mike Sullivan, who had one of the worst days of his career scheming games.

The issue in the running game wasn't all that complicated, really. The Buccaneers missed a few too many blocks, and were running against loaded boxes because of their personnel choices. They kept a tight in on every play, and had two or more tight ends in on 39% of all plays. Part of that was a result of not having a capable fullback on the roster, which limited the Bucs' running game, as they could not use him to create a gap anywhere along the line -- they had to rely on in-line tight ens.

When you do that, you are inviting loaded boxes, and unless you are really, really good at blocking people, you're not going to get very far in the running game. Needless to say, the Buccaneers weren't really, really good at blocking people on Sunday. The bigger issue is that the Jets didn't need to feel tentative about leaving the middle of the field open: the Buccaneers didn't attack it much, don't have the personnel at tight end to do any damage in the passing game, and rarely used play-action passing.

The fact that the Bucs' tight ends were useless in the passing game compounded all the other problems. This was the result: 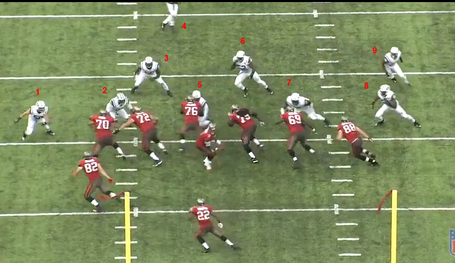 Yes, a nine-man box. Even if the Buccaneers block everyone perfectly, and this was not a badly blocked play at all, they're just not going to get any running room here. #4 at the top and #8 and #9 to the right or going to have free lanes almost always. That presents an issue. 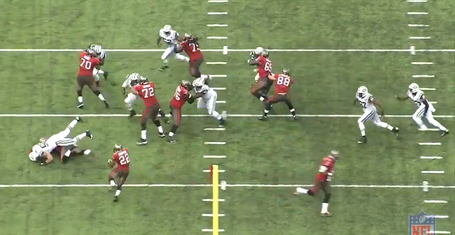 Where is Doug Martin going to go, here? He can't cut back, because there are two Jets pursuing the only open hole there. Note how Luke Stocker has no one to block, by the way. He can't cut around the Jet on the ground, because Carimi is getting beat to that side. That would open up a hole between Carimi (#72) and Zuttah (#76), but that's a pretty small hole that's about to be filled by the linebacker getting by Joseph, and the safety just off the screen to the top.

This was basically what happened all game long: there was just no room on the ground, and the Buccaneers couldn't make the Jets pay through the air, as New York routinely played single-high coverage. The most egregious example came on the very final offensive play of the game, though. 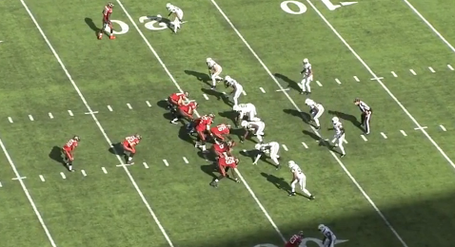 A nine-man box, once again. Once again, the Bucs' two starting wideouts are in single coverage. Yes, the Buccaneers can run the ball, kick a field goal, drain the clock a little and eat up the Jets' final timeout. But they need just three yards here.

You know what would be great here? A quick slant or a go route on a play action pass. Those Jets defenders are going to attack the line of scrimmage hard, and the Bucs were not getting any running room there. On the other hand, a short pass is a high-percentage play with a very high rate of success - and it would have guaranteed the Bucs a win.

Watching the game again on All-22, it was shocking how vanilla the Buccaneers passing game was. No route concepts to speak of, not even a simple smash combination, and a constant tight end presence which had no effect on the passing game. The most creative the Bucs ever got was to motion Vincent Jackson to the slot for some slant routes. Oh boy.

"I think their route concepts are limited," Greg Cosell said on the Fantasy Guru Matchup podcast. "There's a lot of isolation routes. You know, they've got two big wideouts, they basically line them up outside and they basically run routes. They did very little to attack the Jets' man coverage concepts. You did not see shifts, motions, bunch, stack, crossers - the kinds of things you need to do when you're getting a heavy dose of man."

And when we turn on the All-22 film, that's exactly what we see. 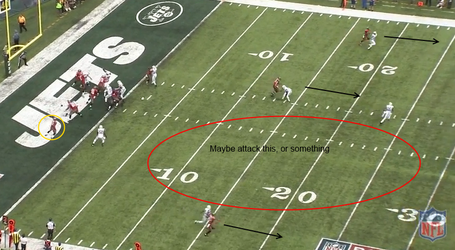 This happened during the second drive of the game. You can see that the Bucs' route concept here consists basically of yelling "GO LONG" at everyone. That's not exactly helping anyone get open, but it does create a massive void over the middle of the field. Boy, wouldn't it be nice if the Bucs had a tight end capable of exploiting that massive void instead of throwing low-percentage go routes to Mike Williams and Vincent Jackson?

Doug Martin would be perfect for that, but he's standing to the side, being guarded by a linebacker. Why is he not running a route, actually challenging that linebacker? Who knows. 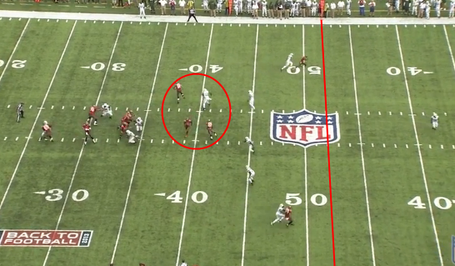 This is the third drive of the game, and the Bucs are facing third-and-14 because their run game couldn't get off the ground. The Buccaneers have to pick up 14 yards and have exactly two receivers running routes close to that depth. They do have three receivers running a bunch of crossing routes some four yards from the line of scrimmage. Boy does that look threatening. But wait, there's a plan! 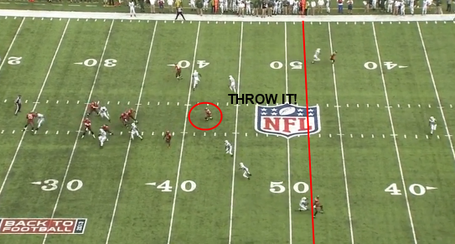 DOUG MARTIN IS OPEN! For some reason everyone is ignoring him - note how two Jets jump on the receiver running toward the bottom of the screen. One of them was likely supposed to guard Martin. So the Jets messed up, that's a good thing! Throw it to Martin and he can probably get close to a first down. Alternatively, Freeman could throw it up to Mike Williams at the top of the screen, as the safety is unlikely to impact that play, what with him already charging toward Vincent Jackson at the bottom.

Instead, Freeman hesitates -- and gets sacked. The route combinations still weren't very good here, and the play was slow to develop, but Freeman had a chance to get the ball to either Martin or Williams, and found neither. That's on him.

Still, it wasn't all bad. 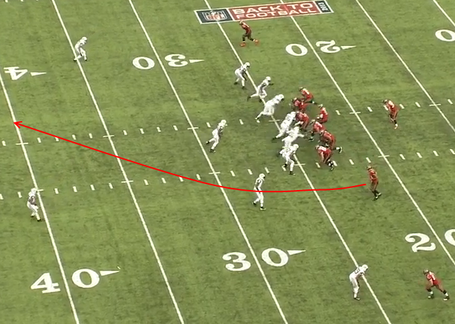 The Buccaneers had three plays of 30 yards or more, and two of them came on slant routes. The third was the big play during the final two-minute drill, which had Vincent Jackson running a comeback route and breaking some tackles.

But you can also see how vanilla the Bucs' passing game was on these plays. They're doing nothing to help Josh Freeman get some open receivers to throw the ball to. They don't have any tight end capable of exploiting the huge voids in defenses that are the result of Jackson and Williams running clear-out routes.

It all got a lot worse when the Buccaneers faced the blitz. Take this play on third-and-long. 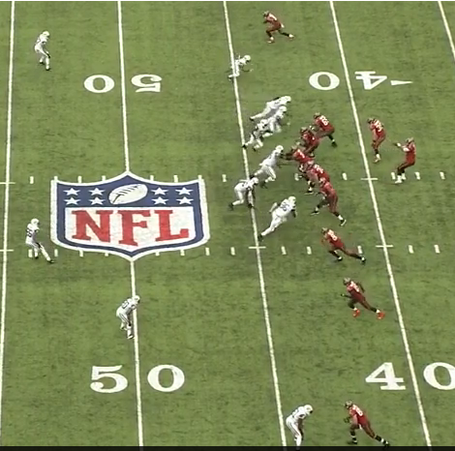 Can you see the blitz coming? It's pretty hard to miss. Chris Burke does a great job of breaking down the blitz itself, right here. They're going to drop a few linebackers into coverage to make it harder to defend and create an overload to the right side of the offensive line, which is going to work.

The normal response for any offense would be to run a quick slant as a hot route (an automatic adjustment to the blitz) and exploit the void left by the blitz with some after the catch running. Sounds easy, right? The Bucs should have little trouble doing that. Except: 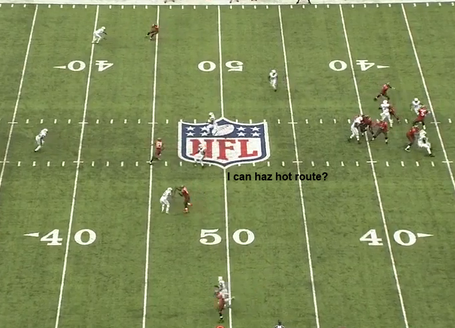 No, you can't haz hot route, apparently. Seriously, what is this? The Jets absolutely telegraph a blitz, get the overload and free rusher they're looking for, and you're going to run a bunch of slowly developing downfield routes, not even looking in the direction of the blitzer?

The result, of course, was that Freeman was hit as he threw and overthrew the ball to a triple-covered Vincent Jackson. Note the comeback route to the top of the screen that's open.

And the fact that the Bucs couldn't exploit that void, just speaks to the horrible job Mike Sullivan did of scheming this game.

Absolutely, Freeman missed throws and missed some opportunities. I don't think I'd give him a new contract based on this game. But the dysfunctional offense starts with the scheme. The Bucs are really killing Freeman's chances, and thus their chances to win games.