The Tampa Bay Buccaneers brought in a lot of fresh blood in the secondary this year, but second-year player Mark Barron's improvement could be just as important.

As I get reminded a lot, I wrote that Barron was the Buccaneer's worst defender in coverage last year. In less harsh words, he was the most inconsistent. Yes, it is a common sight to see rookies struggle with the speed and complexity of the NFL- especially in the secondary. Sander recently spoke with Football Outsiders who gave us some stats on how first round pick (rookie) corners on average fail to make it into the top 60 at their position. In safety terms, Barron ranked 52nd in coverage per Pro Football Focus.

None of this should be alarming... yet. While rookies do struggle, it can't be assumed that they will automatically improve after some playing time in the league. A lot of first round picks disappear into the depth charts after a year or two. The main thing to look for in a rookie is that their play to finish the season is improved over how they started it.

Before we look to the end of the season we will go back and explore why Barron struggled earlier on. 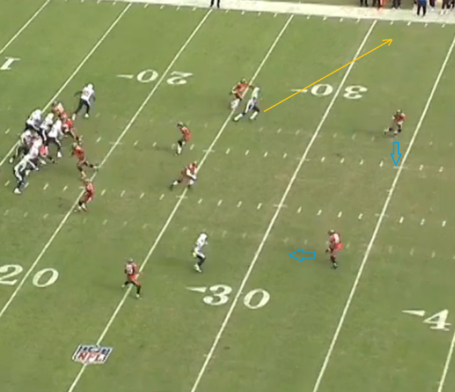 Here against San Diego, the Bucs are in a Tampa 2 defense. Barron is playing a deep 1/2 of the field and only has one receiver to his side. This should be an easy play. However, he turns his hips completely inside and leaves himself no chance to cover the receiver who breaks off of him. 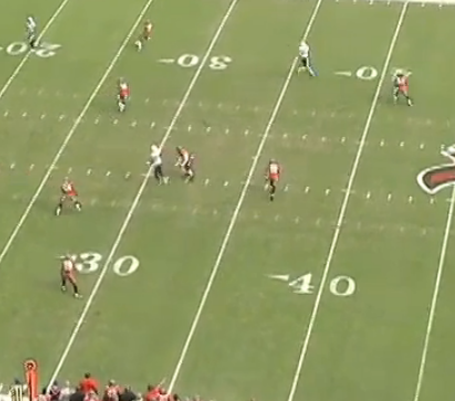 Moving to the catch, Barron is several yards off and the Chargers just got an easy 22 yard completion. 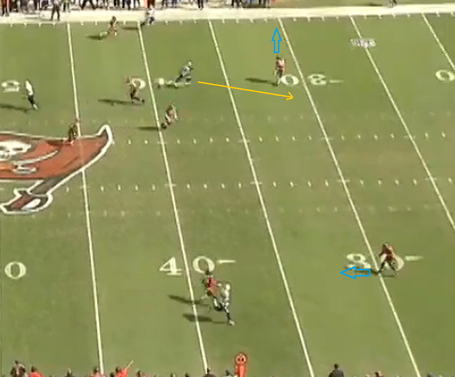 Later in the drive, San Diego sends two receivers down Barron's sideline. The Bucs are again in a Tampa 2 defense. Barron does just about everything wrong. First, he doesn't have proper leverage between the receivers. He has to make up for this by turning his hips outside and running to get in a better position to break on either receiver. This results in him not being able to stay square and in a backpedal. The cushion between himself and Gates is closing and fast. 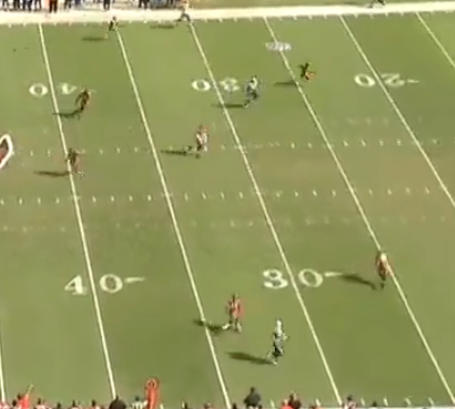 Gates has an easy job to simply break inside Barron whose hips are turned outside. Barron then has to flip his hips 180 degrees before he can begin to break down the space between himself and the ball. The reception goes for 33 yards.

This last play shows that simple mental lapses in technique can start a domino effect that leaves a defender extremely vulnerable. Being vulnerable when you are a safety that is the last line of the defense is an extremely dangerous thing. One defender is responsible for 1/6th of River's passing yards on two plays in one drive. Those are numbers you never want to see. 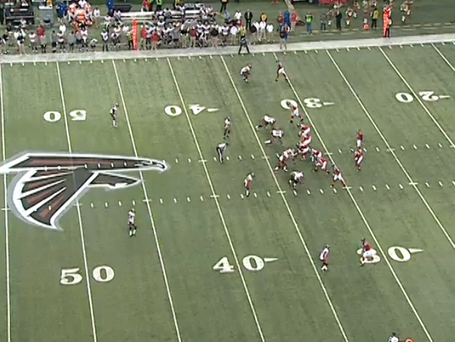 Week 17 vs Atlanta. The Bucs are again in a Tampa 2 defense. Barron, at the top of the image, has two receivers to his side. To begin, look at Barron's split between the two receivers. Pre-snap, he has already left himself much better leverage than he did in the second play vs the Chargers. To take note, he is on the 46 yard line just inside the numbers. 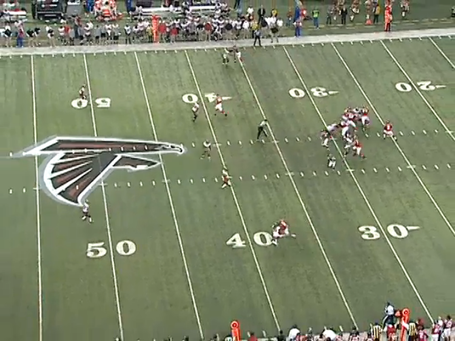 After the snap, Gonzales has released vertical up the slot while White also releases vertical up the sideline. Barron now is on the opposite 49 yard line on the far side of the numbers. Upon seeing both vertical releases, Barron has now left himself an additional 5 yards of cushion and has moved a few yards outside to successfully split the two receivers. This immediate reaction to the offense's releases has allowed him to do one major thing: keep his hips square. 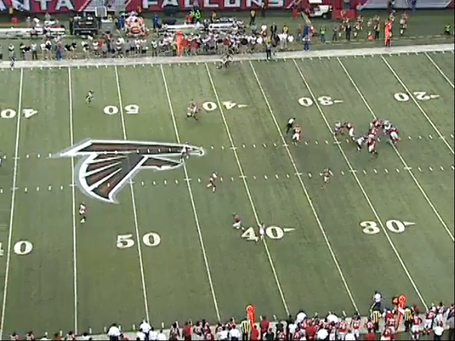 A few frames later, White has slowed down and showed that he isn't pressing Barron vertically. This leaves Barron with one job, cover Gonzalez. Note, Barron is on the opposite 47 yard line just outside the numbers. 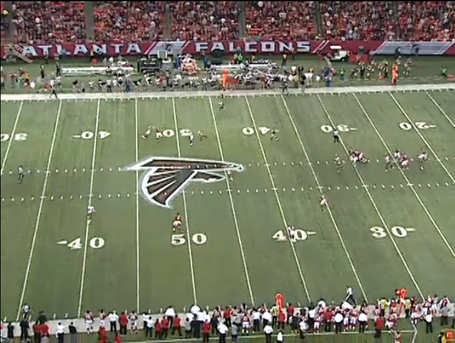 Moving to the attempted catch, Barron is making a great play on the ball. The location of this contest is on the opposite 48 yard line just inside the numbers. Notice how Barron didn't need to change his depth in any way to play the ball. All he had to do was shuffle over two yards from being outside the numbers to the inside. This is a very easy thing for a defender to do when his hips are square. 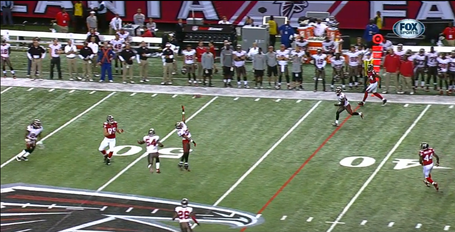 At a much better view, we can see Barron has time to settle himself, plant, and burst at Gonzalez and the ball. 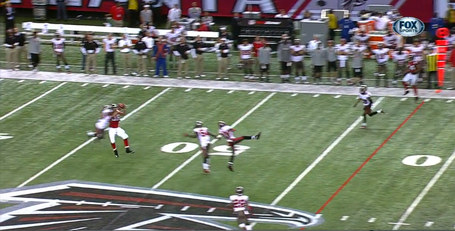 He's so good he's a blur. Side note, I love the synchronized dancing from David and Barber. Barber is dancing away the last snap of his career!

I believe every player deserves to be criticized. It doesn't matter whether they are a pro-bowl vet in Gerald McCoy or an unproven rookie in Mark Barron. This is how players, and people for that matter, are held accountable for their performance and work. I also believe in not counting your chickens before they hatch. The Buccaneers spent the #7 pick in the 2012 NFL draft for a safety. Whether or not they get that #7 player they paid for has yet to be seen.

To stop being melancholy, things look bright for Barron's future. The frequent technique mistakes that cost him big receptions throughout the season can be fixed. We also have the tape to see it all come together. Very iconically, we see it in the last snap of the year for the defense. In the words of John Lynch,

You think this isn't big for Mark Barron? A guy who some people have been critical of- a high draft pick who hasn't been making a ton of plays. To be going into the off-season with that in your mind. The greatest tight end that ever lived and  you just broke up a 4th and 10 play. Big time by Mark Barron.