Da'Qaun Bowers has not been as dominant as hoped, and that may cause some fundamental issues for the Tampa Bay Buccaneers

Share All sharing options for: The Buccaneers seem disappointed in Da'Quan Bowers' performance

Adrian Clayborn's injury may not be very serious, but the lack of quality backups rightly makes Buccaneers a little frightened of injuries to defensive linemen. And if we can believe Roy Cummings, there's even more reason to be worried about defensive ends.

Bucs LDE Da'Quan Bowers is coming off what Bucs believe was his best practice of camp, but overall he has not played as well as hoped.

That is a little worrying. It's a little early to start drawing conclusions about the performance of any lineman on either side of the ball. We've only had three practices with pads and contact, after all. Still, the Buccaneers are relying on Da'Quan Bowers to turn into an every-down player. He's the reason they let Michael Bennett walk in free agency.

Da'Quan Bowers could be dominant 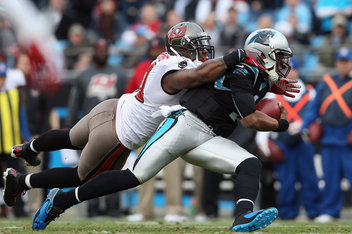 Bowers has talent, but can he be consistent?

And the Buccaneers barely have a capable backup for Bowers. Daniel Te'o-Nesheim was okay-ish as a right defensive end last year, but he was more a part of the problem rather than a part of the solution. The Bucs did draft two defensive ends in the fourth and fifth rounds, but neither of them is ready to start. Fifth-rounder Steven Means is very, very raw and probably not big enough to effectively play the run.

Fourth-rounder William Gholston is more likely to be a capable backup, though. He's the biggest defensive end on the roster and should be fine against the run -- he was an outstanding run defender in college. But with just 10 sacks in three years in college and a real lack of speed, he won't do much as a speed rusher.

If Bowers can't turn into the every down player the Buccaneers want him to turn into, they'll likely have to start platooning players, again. Steven Means and Aaron Morgan as speed rushers, William Gholston as an early down player and Te'o-Nesheim as a utility defensive end should be part of the solution at that point.

But even the best platoon will be limited, and if the Bucs can't get consistent, quality play out of Da'Quan Bowers they will once again struggle to get to the quarterback.