Josh Freeman must improve to get a new contract, says Greg Cosell

Greg Cosell offers some excellent in-depth analysis of Josh Freeman's flaws and areas where he must improve.

Share All sharing options for: Josh Freeman must improve to get a new contract, says Greg Cosell

Josh Freeman was disappointing last season. We know that. Ron Jaworski knows it. And it's what NFL Films producer Greg Cosell said on an appearance with Justin Pawlowski and Jim Lighthall on 98.7 The Fan this morning. Update: The audio is now up on their website. Cosell will apparently be on 98.7 The Fan every Thursday at 10 a.m. during the season, and I'll certainly be listening because this kind of objective insight is difficult to come by.

If you like football analysis and love the Bucs, then you really should be listening to Greg Cosell whenever he talks Bucs. I learn something new every time I listen to him speak, even if I don't always agree with what he says. Most importantly, though, he doesn't have an agenda or a bias. He evaluates every team and talks about every quarterback -- so we can probably take his opinion more seriously than those of necessarily biased bloggers like me.

"It goes back to his first full year as a starter, when he had very good numbers," said Cosell. "I think in Freeman's first year as a starter, and if I remember correctly he had 25 touchdowns with only 6 picks, something like that. At that point there was a sense that this kid was on his way to being elite. Now, when I looked at that year carefully after the season, I thought that many of his plays came off improvisation, came off movement. Now I'm not suggesting that's a negative, but I think it's very hard to play consistent that way because I think there's a random element to that."

"We never talk about the plays that don't work when quarterbacks move, we only talk about those that do work and that you see those all the time on highlights. So you get a sense that wow, this guy is terrific. I thought that even after that first year he needed a lot of work as a consistent, precision, pocket passer. And I think he's been very erratic in his development in that area."

There are two views to take, here. The first one is that the problem is Josh Freeman. I'm inclined to agree with that view: Josh Freeman had a good season in 2010 in part because he was successful but also lucky on third down. Luck as in having 8 dropped interceptions that season, topped only by Carson Palmer (9) and Mark Sanchez (13(!)) according to the 2011 Football Outsiders Almanac.

But also luck in the sense that scrambling doesn't automatically lead to positive results, but all too frequently did do so in 2010. Freeman consistently extended plays with his legs and frequently picked up first down that ways, but it's hard to survive in the NFL that way on a consistent basis. 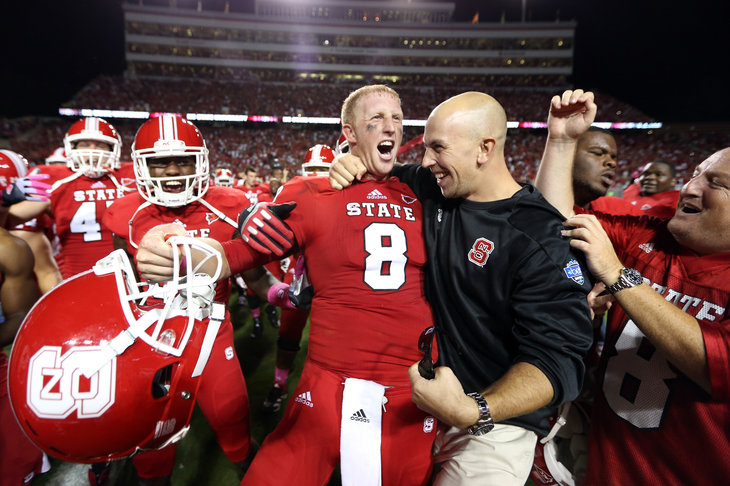 The Buccaneers apparently drafted a facsimile of one of their biggest division rivals.

You take more hits, and the plays that do occur are to an extent a result of backyard football and luck plays a large role in the success of those plays. As exciting as those scrambles are, plays like these aren't exactly consistently repeatable. You can't really build an offense by telling your quarterback to just run around and fling it. Freeman's lack of scrambling isn't necessarily a result of a coaching staff limiting him, it's also a consequence of better understanding of the offense and of more of an effort to play within the system rather than turn to random plays.

In this view, Freeman's evolution to becoming more of a pocket passer isn't what's holding him back, it's a necessary next step.

The other view, of course is that this isn't Freeman's fault, but the fault of the coaching staff who are restraining him in his scrambles. I tend to disagree, but there's some validity to this as well. While Freeman can't make those random scrambles the basis of his game, the fact of the matter is they've almost entirely disappeared from his arsenal -- and that's not a good thing, either.

What an offensive line does for a quarterback

"I think the Bucs' O-line is not a bad O-line but it's not top two or three.I think it's always easy to see well gee, 'behind a great O-line a quarterback would be a lot better.' I always struggle with that, because when you watch every play like I do, there's many many times when the quarterback has no pressure whatsoever and he's just not reading coverage properly, throwing the ball erratically -- and these are plays that people don't see. Because you've got to watch every play more than once in order to really study that. So, you know, I don't think that's a huge factor in where Josh Freeman is in his career right now to be honest with you."

In general I agree with that, but there's one caveat here. Towards the end of the season, the Bucs' offensive line really hurt Josh Freeman. This became obvious once you started watching the All-22 tape, especially from the endzone perspective. While the line held up admirably throughout most of the year, at the end of the season it started to break down -- and Jamon Meredith was a big part of the problem.

Now, will fixing that make Josh Freeman's flaws go away? Absolutely not. But it may just prevent a few boneheaded plays, a few dumb throws and a few inaccurate balls over the course of a season. And a few of those passes could be the difference between wins and losses in the NFL.

Pawlowski asked Cosell about whether the quarterback made the right reads when he did get time in the pocket.

"For the most part, yeah," said Cosell. "If you can't make throws in a clean pocket, which by the way doesn't happen all that much, then you shouldn't even be a starter to begin with."

"I think the more telling point is that only Mark Sanchez had a lower quarterback rating versus blitz. Freeman's going to have to become better versus blitz."

"There's many elements that go into that. Sometimes it's not all his fault, so I want to be clear on that. But the point is the teams that are good against blitz, are good because of precision execution, not because the quarterback 'makes a play'. Because the ball's out to the right receiver at the right time with accuracy. "

The interesting note here: "pressure" referred to blitzes rather than overall pass pressure, which appeared to be what Jaworski was saying initially. And that statistic is a little surprising. According to the 2011 Football Outsiders Almanac, Josh Freeman was just as good against the big blitzes he faced on 14% of all passes in 2010 as he was against standard pressure. So what changed in 2012? The offense.

This, I think, is an area where we can realistically expect Freeman to take a couple of big steps. Executing your offense against the blitz is all about understanding said offense: you must know where the outlet receiver is, where the hot routes are, where the protection -- and all of your teammates need to be on the same page.

That was clearly not the case last year. A second year in the same offense should remedy those issues -- although 'should' and 'will' don't always coincide in reality.

"Josh Freeman is a big, physically talented kid. No one would disagree with that. He throws the ball very well, big arm, can move. You know, he looks the part. You'd like to think that with another year under his belt in the second year under Mike Sullivan, same system, under Greg Schiano that improvement comes. That's what they're hoping. And if improvement comes and he takes a significant step forward, the Bucs will be thrilled and they'll be forced to sign him. But if it doesn't come and the inconsistency remains, they've got Mike Glennon."

Cosell also reiterated his opinion that Matt Ryan and Mike Glennon are remarkably similar as prospects. Clearly, Cosell likes Glennon -- although everything suggests that Glennon will sit this year behind Freeman. He's simply not ready to challenge Freeman seriously in training camp, and Greg Schiano keeps repeating the "Freeman is our quarterback" mantra as if saying that will make the media speculation disappear.

Ultimately, all we can do is wait, see and speculate endlessly.