The Tampa Bay Buccaneers have placed great faith in Da'Quan Bowers, and now the question is whether he can repay that faith.

Share All sharing options for: Da'Quan Bowers is a prime breakout candidate

Last week, we wrote about Da'Quan Bowers' impending dominance and how he did better than Terrell Suggs last season. That speaks well of his potential next season, although it remains to be seen whether he can come back fully from his Achilles injury, as he never looked completely healthy last year. But he's a prime candidate for a breakout season, and that's exactly what Chris Wesseling thinks over at NFL.com.

Injuries have made it tough to get a reliable read on Bowers' potential two years into his NFL career. Recovering from minor microfracture surgery, Bowers was limited by a weak knee in a part-time role as a rookie. Although he matched Terrell Suggs' impressive five-month return from Achilles surgery in October of 2012, Bowers noticeably was hindered the rest of the way.

On a positive note, Bowers has shown flashes of potential as a power rusher with excellent upper-body strength and the ability to win the leverage battle against offensive tackles. While the lower-body explosion isn't what it was at Clemson, Bowers still showed decent straight-line closing speed. The Bucs also appreciated the aggressive and violent edge to his play.

Bowers' physical talents are without question. On film, he will show flashes of dominance but never consistency. He has similar physical gifts to Mario Williams -- but of course, he has yet to show that kind of play on the field. Now entering his third season, this would be the perfect time for him to break out. And with just two years left on his current contract, Bowers' could receive a lucrative extension after a quality season. 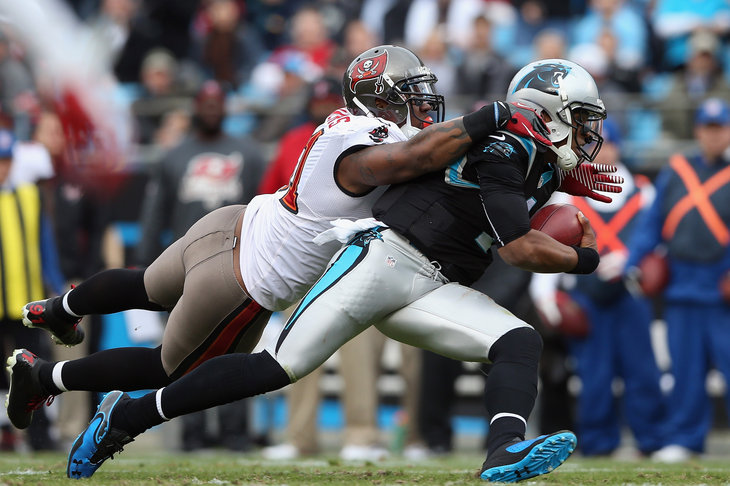 The Bucs are all-in with Bowers this season, though. They let their best defensive end Michael Bennett walk to give Bowers a bigger role. He'll be gifted the strongside starting job and his immediate backup is a fourth-round rookie whose last name ends on Gholston. If Bowers can't succeed, the Bucs have an issue.

Fortunately, he has all the tools to dominate and a first full offseason to develop his skills without worrying about rehab. Now we'll see whether that makes all the difference.

Which Buccaneer jersey would you exchange?

Taking risks is part of the NFL