According to Len Pasquarelli, Monte Kiffin's Tampa Bay Buccaneers defenses couldn't stop people from walking all over them. Too bad Pasquarelli's numbers are figments of the imagination.

Len Pasquarelli seems to have some trouble reading statistical tables, or maybe it's just his intern who's messing up some damn basic research. Pasquarelli, who's filling for Dan Pompei on the NFP Sunday Blitz, penned a column about former Tampa Bay Buccaneers defensive coordinator Monte Kiffin. The venerable old man is now the defensive coordinator of the hated Dallas Cowboys after four years of helping his spawn from hell convince college programs they can totally trust him.

Pasquarelli's main point? The Tampa 2 is more about preventing points than it is about yards. And Pasquarelli has lots and lots of statistics to back up his point. Unfortunately for Len, he doesn't seem to understand the whole concept of statistics, numbers or reality. Observe:

In his 15 seasons as an NFL coordinator, Kiffin units have ranked just once in the top 10 in total defense, and that was way back in 1995, with the New Orleans Saints. Somewhat stunningly, in his celebrated 13 seasons in Tampa Bay, the Bucs never statistically ranked higher than 16th in yards allowed and 11 times were 20th or worse.

Kiffin's defenses have ranked in the top 10 in yards allowed in all but three seasons, and one of those seasons was cited by Pasquarelli as a top 10 defense. In fact, the Bucs allowed the fewest yards in the entire league twice during Kiffin's tenure. Twice! 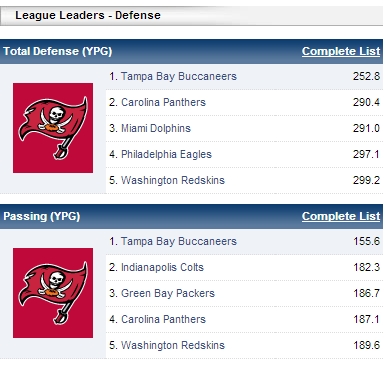 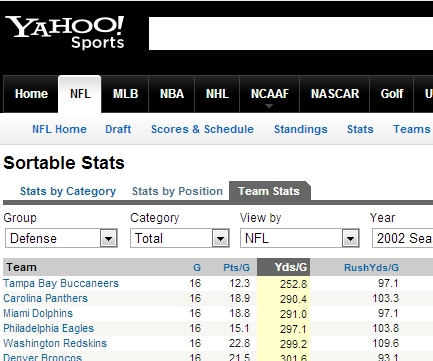 Besides, how does his not mind not go "wait a minute, is that right?" when writing that sentence? How does he go "Last in yards, first in points, SOUNDS PERFECTLY REASONABLE TO ME."

In the eight years the Cowboys aligned in the 3-4, they never rated in the top 10 in defense against the rush, and just once were in the top half of the league. Six times, they were 20th or worse.

Then again, Kiffin's defenses haven't ranked in the top 10 against the run since 1996, his first season in Tampa Bay.

Yes, they rank fourth. And two of the three teams above the Bucs are only ranked that high because they're expansion teams.

I know what Pasquarelli did, though. He reversed the rankings for total defense, somewhere. I don't know where or how, but he did. He thought that being ranked 1st meant allowing more yards than the rest of the NFL. Because, fun fact, if you simply reverse Pasquarelli's numbers for league rankings, everything he says is true. Of course, we don't live in opposite world, so everything he says and his conclusions are a bunch of ignorant wankery instead of an interesting column.

Now, I get it, I do. We all make mistakes, and I've made plenty. But this...well, I don't think I've seen such a mess in ages. It wasn't just a mistake made once, either: the mistakes just kept piling up. And then he built a national column around those mistakes.

Word to the wise: check your numbers.

Did the Buccaneers improve at tight end?

Why do YOU love the Bucs?

Freeman was the 2nd-worst NFL QB against pressure