Ron Jaworski called Josh Freeman an "enigma" and a "frustrating" player, which is not a compliment for the Tampa Bay Buccaneers' starting quarterback.

Oh yes, it's another Josh Freeman topic. Because we all know that discussing the team's quarterback is all we can do right? Now that the Mike Glennon controversy seems to have mostly died down, we've seen several statistical breakdowns, but we hadn't yet seen an in-depth film study breakdown. That has changed, though, as Josh Freeman came in 21st on ESPN's excellent Ron Jaworski's Quarterback Countdown, which is a pretty damn clumsy name to type out like that.

That 21st ranking is right in line with most advanced statistics rankings, so it passes the smell test. Yes, Josh Freeman was a slightly below-average quarterback last season when you look at the year as a whole. That conclusion is becoming rather hard to escape.

Pressure is the name of the game

Jaworski called Josh Freeman "frustrating" and an enigma, which is probably the perfect word to describe him. Highlighting Freeman's amazing mid-season six-game stretch as an example of Freeman at his best, Jaworski pointed out Freeman's confidence, anticipation and arm strength. The highlight being his game-tying touchdown throw against the Panthers at the end of the season.

What do Freeman's deep passes tell us? 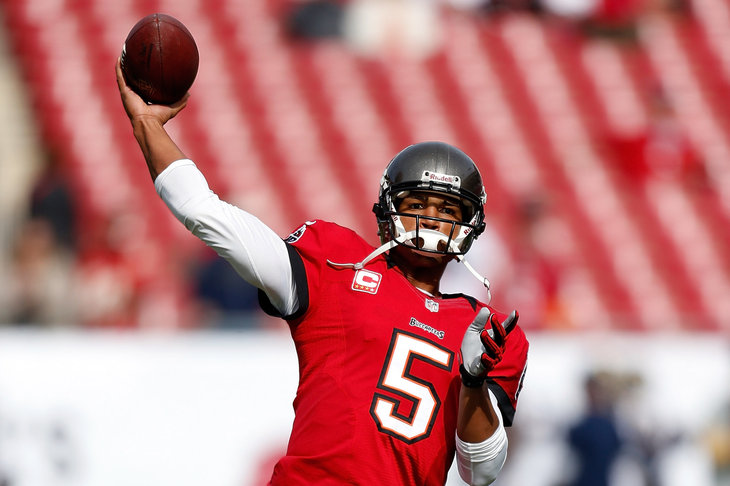 But the fact that it was a six-game stretch rather than a sixteen-game stretch is the entire issue. Jaworski called him "erratic with his accuracy" and noted that he had many "communication issues with his wide receivers" and noted that only Mark Sanchez had a lower quarterback rating (I assume this refers to passer rating) versus pressure.

I'll say that again: only Mark Sanchez, now infamous for being an awful quarterback, showing off his butt in silly Vine videos, smoking e-cigarrettes and, oh yeah, a butt fumble was worse against pressure. That is one awful, awful statistic.

It also in part explains why at the end of the season Freeman's play collapsed. Part of it was Freeman's inherent inconsistency, but the offensive line really started playing worse after holding up surprisingly well in the face of injuries for the first 11 or so games. Jamon Meredith especially was exposed at the end of the season, regularly allowing pressure and especially struggling with quickness.

Happy news; Davin Joseph and Carl Nicks return. So, that should help. Unless they start spontaneously losing limbs.

Underneath defenders are still an issue

One play Jaworski talked about was an interception by James Laurinaitis of the St. Louis Rams. NFL.com has video of the play, which is ugly indeed. By the time Freeman comes around to throwing the football, the window has simply closed and he can't fit that ball in there anymore. Which leads to one ugly interception -- one of four that game.

This has been a bit of a consistent issue with Freeman throughout his career, where he struggles to locate underneath defenders. Play-action is great, but it can hurt a quarterback's ability to read a defense because he has his back turned to the defense as the play develops. The time available to diagnose a defense is shortened significantly. That requires quick decisions and quick throws before windows close -- which was an issue for Freeman at least on that play, but on other plays as well.

ESPN should be repeating this bit quite a bit today and perhaps over the next couple of days, so you should definitely try to catch Josh Freeman's bit if you can.

ESPN: Buccaneers are ready to make the playoffs

The Buccaneers believe they fell short in 2012