Mike Glennon could be NFL ready, judging by NC State's record -- but his offseason performance seems to disagree.

Share All sharing options for: NC State prepared Mike Glennon for the NFL

North Carolina State's coaching staff has produced two rookie quarterbacks who made an instant impact over the last five seasons: Matt Ryan (then at Boston College) and Russell Wilson. And now, the Buccaneers hope they have number three on their hands in Mike Glennon, although they certainly hope he doesn't have to play this offseason.

According to NFL Films producer Greg Cosell, that's not a coincidence. "North Carolina State is one of a number of schools in college football that really prepares a quarterback for the NFL with what they do," said Cosell on the Yahoo! Shutdown Corner podcast. "Their schemes are NFL schemes. They do a really good job preparing players."

Those schemes aren't that conducive to college success, given the relatively lackluster numbers their top quarterbacks have put up, but it's certainly produced quality NFL play in spite of mediocre college numbers. Contrast and compare the final seasons of Matt Ryan, Russell Wilson and Mike Glennon, courtesy of sports-reference.com:

Incidentally, it seems that these three players are the only ones to have attempted over 500 passes in a single season in the ACC, if sports-reference.com can be believed.

Still, just look at those numbers. Eerily similar, right? That's the power of an NFL-ready offense, and looking at those statistics you would have little doubt that Glennon would be as ready to start as Wilson and Ryan were. 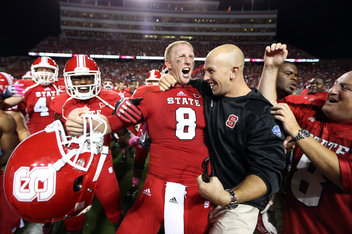 Mike Glennon is eerily similar to Matt Ryan in a lot of ways.

Of course, the offseason so far hasn't really reinforced that idea. Glennon is still a rookie, after all, and he hasn't looked ready to play. That doesn't mean he won't be ready to play down the line, but it may be a stretch to see him on the field this year. At least it's a little more evidence that the world wouldn't end if Josh Freeman wasn't with the Bucs in 2014, though.

One encouraging thing is that Greg Cosell actually felt positive about what was probably Glennon's worst performance last season, when he was getting hit play after play by the Florida State defense. "I thought he did an excellent job against a difficult defense being patient, throwing underneath, sustaining offense" noted Cosell.


(courtesy of the excellent Draft Breakdown)

That may be true, and it certainly is, but I still see a lot of negatives when I watch that game. Then again, those negatives show up elsewhere, too. He struggles a little more than most quarterbacks under pressure, and his accuracy can be a little iffy at times. Add a few questionable throws and you still have some problems on tape -- which would be why he fell to the third round.

One other nugget from that podcast: the Buccaneers have the biggest pair of starting wide receivers in the NFL, or so Greg Cosell noted. The Bucs really appear to be imitating the San Diego Chargers of a few seasons ago.

Did the Bucs improve at quarterback?

Tiki, Simeon chime in on silliest fight ever