Buccaneers say Freeman is their quarterback; competition with Glennon overstated

Share All sharing options for: Buccaneers say Freeman is their quarterback; competition with Glennon overstated

Both McNulty and Sullivan suggested that multiple system changes contributed to Josh Freeman's inconsistencies, which makes sense. His first offensive coordinator was fired two weeks before the start of his rookie season -- and that offense was then replaced with a West Coast Offense by Greg Olson with no time to implement it. By the way: Olson served double duty as a quarterbacks coach. A recipe for disaster, of course.

Early quotes from Bucs coaches are encouraging, with Schiano, Sullivan and Mark Dominik all noting at various points this offseason that Josh Freeman looks much more comfortable in the offense this year. Now we wait to see whether that translates onto the field, and whether that knowledge will allow him to have some cleaner and more consistent mechanics and footwork, a lack of which led to too many inaccurate throws last year.

Looking toward the future

The challenger has no chance 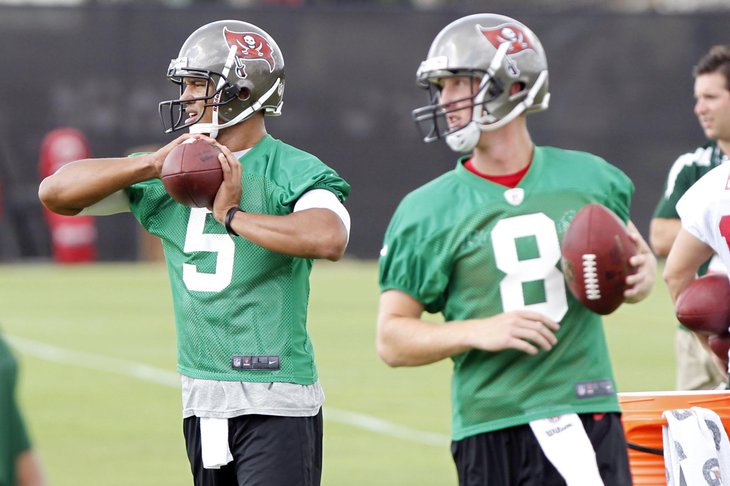 The Bucs may talk about a quarterback competition, but there's really no chance Glennon wins the starting job this offseason.

That consistency could be guaranteed for the future, at least. Quarterbacks coach McNulty has experience in that offense from his time in Jacksonville, though, which no doubt will help them maintain some continuity if Sullivan leaves for a head-coaching job. McNulty is widely expected to be the next Buccaneers offensive coordinator, and he was reportedly on the Bucs' radar last year as a potential offensive coordinator. Mike Sullivan was interviewed for the Chicago Bears' head coaching job last season.

Whether Josh Freeman will be a part of that future remains to be seen, but it does seem like the Bucs are committed to their starting quarterback for at least this season. There haven't been any "yeah but Glennon could totally win the starting job" reports in weeks.Now we hear that they're leaning toward keeping three quarterbacks, via JoeBucsFan. It makes some fiscal sense: They guaranteed some $365,000 of Dan Orlovsky's salary this year, which means cutting him would actually cost the Bucs a little cap space because of the need to pay the new player.

But it's also a knock on Mike Glennon: why are you keeping three quarterbacks when every roster spot is valuable, and you think Glennon can play early and play well? Some more evidence that the quarterback competition isn't all that competitive.

Mike Glennon is surprised to be a Buccaneer