Will the three-man line be effective for the Buccaneers, or will this turn out to be another defensive flop?

Share All sharing options for: Buccaneers Defense 2013: Return of the Three-Man Line

It seems the Tampa Bay Buccaneers are ready to make three-man lines a big part of their defense once again. According to Pewter Report's OTA report the Tampa Bay Buccaneers were working on a dime defense with a three-man line earlier this week. The line had Gerald McCoy at nose tackle, with Da'Quan Bowers and Aaron Morgan at defensive end. The latter was working there presumably because Adrian Clayborn is still being held out of 11-on-11 work due to his recovery from a knee injury.

Using a three-man line allows the Buccaneers to keep Mason Foster and Lavonte David on the field along with their best defensive lineman. One intriguing aspect of this specific package was that the Bucs had three safeties and three cornerbacks on the field, with Keith Tandy the third safety due to Dashon Goldson's absence from practice.

The three-man line was a hallmark of Raheem Morris' defense in his time in Tampa, and it was one of the most-hated aspects of that defense. The three-man line seemed ineffective and was mostly used to trot out Dekoda Watson and Quincy Black as edge rushers, which generally failed. It seemed to disappear last year, appearing just a few times per game with four-man lines being a staple of the Bucs' dime defense.

I do not like three-man defensive lines. At least, I don't like them for the Buccaneers' personnel. Mostly, they put the team's best pass rusher in the worst position to make an impact. Gerald McCoy lines up as the nose tackle, which makes it much easier for the opposition to double or even triple-team him. That's exactly what happened last year, too. The Bucs could line him up as a three-technique to give him a better chance, but that would give the quarterback an easy lane to scramble down the field up the middle. 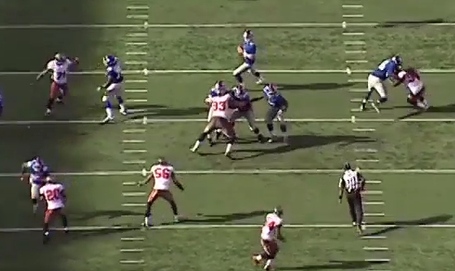 Of course, that's only really true if the Buccaneers rush three rather than blitz, which happens a lot. But those, too, leave McCoy at a disadvantage. Blitzes are designed to create lanes for linebackers and defensive backs to get to the quarterback. A well-designed blitz can create very good numerical advantages at specific points through misdirection, but the Bucs were awful at getting free rushers to the quarterback last season. They will need to improve their blitz packages to get that right.

There's also the question of whether this is the best use of personnel. Taking a defensive lineman off the field in favor of keeping Mason Foster on the field (Lavonte David is the team's every-down linebacker) gives the Bucs a little more flexibility with blitzes, but hurts them in terms of matchups: Foster is not going to beat a defensive lineman with any kind of regularity.

Of course, the Buccaneers don't really have a second disruptive defensive tackle, which may play in to the use of a three-man line. William Gholston and Daniel Te'o-Nesheim may be able to slide inside to play three-technique, but the latter didn't do much in that role last season while Gholston is just a rookie. Akeem Spence and Derek Landri can probably slide over and play three-technique too -- but neither has proven to be disruptive in that role.

If one of those players shows the ability to be disruptive as a three-technique on passing downs next to Gerald McCoy, we could see the use of three man lines be very limited. Maybe that's the plan now, even. Perhaps this is just a change-up package that won't play a big role on defense, and the Bucs just happened to be installing it when Pewter Report was watching practice. But the three-man line could easily become a staple of this defense in dime situations, and that may not be a good thing.