We continue our training camp preview with defensive tackles.

The Tampa Bay Buccaneers have exactly one good starter at defensive tackle in Gerald McCoy, but they have few backups and an unsettled nose tackle position. Training camp will determine who will start next to the Pro Bowler, and who will play arguably the most important position on defense if McCoy goes down.

How Gerald McCoy Gets One-On-Ones 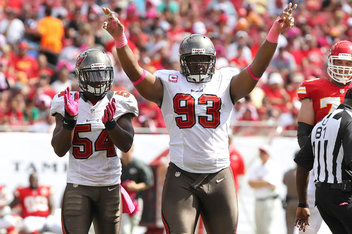 The three-technique position is designed for the defensive tackle to get one-on-one opportunities, and a few returning players should help McCoy there.

The Tampa Bay Buccaneers had a very good run defender at nose tackle last season in Roy Miller. He was essentially the ideal starting nose tackle in the Buccaneers' Stunt 4-3, although he offered little as a pass rusher. He signed with Jacksonville Jaguars in free agency. Meanwhile, the Buccaneers appear to think that Akeem Spence, their fourth-round draft pick, will be able to hold his own as a starter and add more pass rush ability than Miller did.

Spence has tremendous upper body strength and flashed good movement and pass rush skills, but his inconsistent anchor as a run defender was concerning. Fortunately he has the ideal build and skillset to play the nose tackle in the Bucs' defense, which revolves more around the ability to move than mass. Still, as a rookie, it remains to be seen how well he can fill in for Miller.

Two other players are more likely to make an impact there, though. Gary Gibson played decently last season, but is now fighting with Derek Landri for a roster spot. Gibson is essentially a poor man's Roy Miller while Landri is a bit more intriguing as a nose tackle with some burst and rushing moves.

The Tampa Bay Buccaneers have one of the best three-techniques in the NFL in Gerald McCoy but almost nothing beyond him. Last season the Bucs 'solved' that problem by moving Michael Bennett and Daniel Te'o-Nesheim inside with regularity, effectively using them as backup defensive tackles on passing downs and sometimes even running downs. I would expect this trend to continue this season.

Te'o-Nesheim will likely move inside on some passing downs, while the other fourth-round draft pick William Gholston has the body type to do that as well. He's a really big, tall guy but was very stout in run defense and had surprising short-area quickness for his size. In fact, he may be more likely to get on the field in that role than as a defensive end in his rookie year.

The Buccaneers also have three low-level backups who may be able to earn a spot on the roster as a three-technique in Derek Landri, Matthew Masifilio and Andre Neblett. Landri is probably better suited to nose tackle in this defense, but he can play both positions. Masifilio is a second-year player of whom I know very little, but Andre Neblett may be the most intriguing player of the bunch. He is entering his fourth year in the league and there's a chance he's ready to lift his game to the next level, after collecting 2.5 sacks in limited playing time for the Panthers the past two years.

Check out our other position previews in the training camp section.

Donald Penn missed most of his weight incentives, reportedly

But Donald Penn strikes back, refuting that report

The best player ever drafted by the Bucs